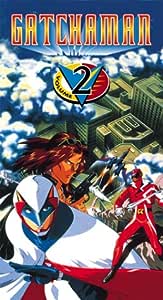 David Swan
5つ星のうち4.0 Finally, Gatchaman II is released in the U.S.
2017年5月25日にアメリカ合衆国でレビュー済み
Amazonで購入
It took three tries before fans of Battle of the Planets/Gatchaman got the ultimate collection. First, was the Battle of the Planets DVD’s released by Rhino Home Video back in 2001. These also featured selected Gatchaman subbed episodes and can be purchased for a song. Next, was the Gatchaman dubbed episodes released by ADV on 19 DVD’s. Very cool but you generally had to buy each DVD separately and the collection took up a whole lot of shelf space and cost a bundle. Last up was Sentai Filmworks which released all 105 episodes using the ADV dubs in one complete blu ray collection. Not only did we get every episode but we also got the excellent 1994 OVA as well as tons of extras and you can currently pick it up for $78 on Amazon. So, truth be told I did a lot of double dipping. If I could have seen into the future I would have waited for the complete collection and saved a bunch of money.

Does this mean fans should skip the Gatchaman II release which has no dubbing and is stored on DVD? Should we wait for something better? I would say no. The thing is Battle of the Planets has a much bigger following than Eagle Riders which used Gatchaman II and Gatchaman Fighter to build their episodes. I watched one episode of Eagle Riders years ago but had no desire to watch another despite being a HUGE fan of BotP. I have a feeling this is going to be the one and only release of Gatchaman II and let’s be honest. Gatchaman II is a Japanese cartoon from the late 70’s and whether you put it on DVD, blu ray or 4K it ain’t gonna look much different. If you think there is a media that’s going to turn this into a pristine image you’re dreaming. I would predict that Gatchaman II will have a much more limited release than Gatchaman and once that’s gone there may well be a spike in the price. At around $45 you get less than half the episodes of Gatchaman with essentially no extras. I don’t love the price but fans often have to pay more for niche products. Many of the episodes have been on Youtube for years but there is never a guarantee they won’t be removed.

Gatchaman II is very much a continuation of the first season where Joe died at the end and Leader X was defeated. Leader X has returned and reconstructed Galactor which is now being led by the mutated human girl Gel Sadra who replaces the deceased Berg Katse. The show follows the same template as season one and if you liked the first season you’ll likely enjoy this season. It’s a little weird that there has supposedly been a significant amount of time since Leader X was originally defeated and yet Jinpei looks exactly the same age.

J. R. Shartzer
5つ星のうち4.0 Content is great, presentation is slightly lacking
2017年5月8日にアメリカ合衆国でレビュー済み
Amazonで購入
The continuation of the original Gatchaman series feels a bit darker and more mature than its predecessor. Gatchaman can be a bit repetitive if binge watched, but the series is bold, interesting, weird (at time), and always fun.

The original Gatchaman was released on blu-ray with a full dub. Gatchaman II is only available on DVD with no dub. The only reason I didn't give the series 5 stars is because it wasn't given the same love that the original was by Sentai Filmworks I understand that it would have been expensive to produce and probably not worth the cost due to it being somewhat niche, as a fan it is somewhat disappointing. Still, it's nice to finally have the entire series in the US for the first time.
続きを読む
10人のお客様がこれが役に立ったと考えています
役に立った
フィードバックを送信中...
フィードバックをお寄せいただきありがとうございます。
申し訳ありませんが、お客様の投票の記録に失敗しました。もう一度試してください。
違反を報告
レビュー を日本語に翻訳する

Now for the story:
It's been two years since the International Science Organization and their elite Science Ninja Team strike force defeated the threat of GALACTOR at the cost of Joe the Condor's life. However, there's no time limit on evil, and when Leader X stages a horrific attack on a cruise ship, there's only one force in the universe with a chance of stopping them! Can the Gatchaman team adapt to working with Joe's replacement in time to stop Leader X from mutating one of the victims into GALACTOR's new leader? Or does the ISO have a secret weapon lurking in the wings, ready to help save the day? For the first time, the uncut, uncensored second season of the series that set the standard for Japanese sicence fiction storm American shores in GATCHAMAN II!

A. Y.
5つ星のうち4.0 Get a good deinterlacer
2019年4月3日にアメリカ合衆国でレビュー済み
Amazonで購入
I can't really comment accurately on the visual quality of the series. Sentai Filmworks might just have gotten dirty source material to begin with. It's ok visually for a series in the 70's. The big thing is that it's 480i video, which is right on the back of the box so no surprises there. It can get REALLY distracting so make sure you have a good deinterlacer on your dvd player or tv. There is a bluray edition in Japan so maybe in the future it'll look better for Western release. There are also lipsync issues where characters will talk when there is no mouth animation, or not talk when there is.

What I can fault Sentai Filmworks on is that there are no special features aside from clean openings/endings. So it's not helping to offset the visual quality of the series. The translations are kind of bad as well. It's like they translated it from English dubbed audio (which there is none).

Jennifer L. Brown
5つ星のうち5.0 Great to finally see this sequel to Gatchaman
2017年6月29日にアメリカ合衆国でレビュー済み
Amazonで購入
But it would be even greater to have it with English dubs, buts I am still glad to have this collection in my possession. I just happen to prefer the dubbed voices/actors for the characters over the original Japanese voice actors. Again, that is my personal preference.
続きを読む
2人のお客様がこれが役に立ったと考えています
役に立った
フィードバックを送信中...
フィードバックをお寄せいただきありがとうございます。
申し訳ありませんが、お客様の投票の記録に失敗しました。もう一度試してください。
違反を報告
レビュー を日本語に翻訳する

The One Who Wrote This
5つ星のうち2.0 Content's Good, But Box Was Busted
2019年5月5日にアメリカ合衆国でレビュー済み
Amazonで購入
The DVDs are fine, but the case that it was delivered in was busted.
続きを読む