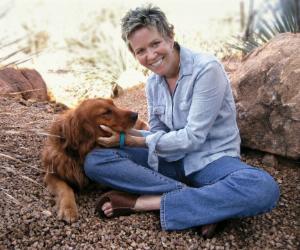 From Kirkus Reviews:
"Junie's swarms of young fans will continue to delight in her unique take on the world....A hilarious, first-rate read- aloud."

"For heaven's sake, Junie B. What in the world is the matter with you? It's just a baby earthworm.  Look how teeny he is. This little fellow would make a wonderful pet."

I did a huffy breath at her.

"Yeah, only worms cannot be pets, Grandma. 'Cause pets have fur so you can pet them. And worms just have ooey gooey skin."

Grandma Miller looked surprised at me.

I covered my ears with my hands.

"Okay, okay. Enough with the fur," I said. "But worms don't have eyes or ears, either. And they don't have legs or tails or feet or necks. And they don't chirp or bark or cluck or meow. And so what kind of stupid pet do you call that?"

Then she smiled real big.

"I'd call that the kind of pet that won't wake up the neighbors or sniff the company or scratch himself silly," she said back.

After that, she stood up. And she gave the baby earthworm to Mother.

"I'll leave this little guy with your mother for now," she said. "You can think it over and see if you want to keep him. I'll check back with you later."

Then she kissed me on my head.

And she grabbed the ice chest.

And she hurried out the door.


Mother looked at the baby worm in her hand. "My goodness. You are a little one, aren't you?" she said.

She got an empty mayonnaise jar out of the cabinet.

Then she poked holes in the lid for air. And she put the baby worm inside of it.

Mother looked at him in there.

"You don't even know where you are, do you, little fella?" she said. "I bet it's kind of scary in there all by yourself."

I turned my back on her. 'Cause I knew what she was up to, that's why.

"Of course not," said Mother. "But just because you don't like him, doesn't mean I can't like him."

She talked to the worm some more.

"Hmm. Maybe you'd be happier if you had some dirt to crawl around in," she said. "Let's go outside and see what we can do."

After that, Mother put on her jacket. And she went outside. And she digged in the dirt from her garden.

She came inside and showed me the jar.

It looked kind of cute in there.

There was a rock and a stick and a dandelion and some clovers.

I peeked at the baby worm.

He peeked back, I think.

"Yeah, only I still don't like him," I said kind of softer.

I rocked back and forth on my feet.

"And anyway... even if I did like him, I don't know what worms eat. And so what would I even feed that guy?"

"Are you kidding? That's the best part about worms," she said. "They get all of their food right from the soil. You don't have to feed them anything at all."

Just then, my baby brother started to cry.

Then she quick handed me the jar.

And she runned right out of the room.

Carla Enrici
5つ星のうち5.0 Laugh out Loud
2019年8月20日に英国でレビュー済み
Amazonで購入
Great series if books..
Laugh out loud with your kiddies..
My children love the series, my 9 year old reads them in a night..

Angel Sullivan
5つ星のうち5.0 Love them!
2020年2月15日にカナダでレビュー済み
Amazonで購入
My 6 year old and I have been reading these books, Many people criticize for the Grammar but the character is in kindergarten, and these are her wacky and zany stories. My Daughter laughs and can't wait to find out what shenanigans she will get into next!
続きを読む
違反を報告
レビュー を日本語に翻訳する

Raquel
5つ星のうち5.0 great
2021年7月18日にカナダでレビュー済み
Amazonで購入
My niece loves these books so I try to put one with every gift to encourage reading. The book came bent, very poor packaging.
続きを読む
違反を報告
レビュー を日本語に翻訳する

Sandeep Batra
5つ星のうち1.0 Utterly poor and sub standard print quality of the book.
2016年4月23日にインドでレビュー済み
Amazonで購入
Junnie B Jones is something what every child reads. 5 for story.Its great for kids.
But the print is awful. Dont even feel like giving 1 for the quality.
why is Amazon delivering such local prints or getting involved with local vendors. I have ordered 12 books for my kid, was wondering whats reaching me next..the print bleeds and gets on to the hands.Such bad quality of pages.Being a paperback doesnt mean it will be all colourless and such a awful quality.Utterly disappointed.