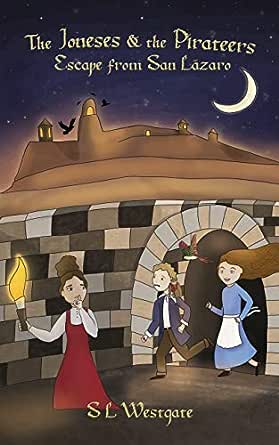 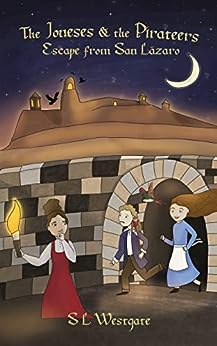 The Joneses and the Pirateers: Escape from San Lazaro (English Edition) Kindle版

The school holidays have arrived, and nine-year-old James can’t wait to put his newfound skills to the test during the pirateers’ annual Holus-Bolus Raid on the Cartagena Naval School for Laddies. But sneaking into the school isn’t the only reason the Swashbucklin’ Nay on Impossible Adventurers want to sail to Cartegena. Elizabeth, Emily, and James are determined to discover what happened to their father and the missing Phantom Lady. Meanwhile, Captain Bal has his own secret plans, Dani refuses to listen to Miss K’s ominous warnings, and James keeps seeing mysterious shadows lurking in Cartagena’s streets.When the raid doesn’t quite go as expected, the crew finds themselves carrying out their most dangerous Nay on Impossible mission yet: escaping from the mazelike dungeons of San Lazaro. Not to mention outsmarting the pirateer-hating guards, hiding from the furious Captain Silverbeard, plotting their revenge on the privies, and hunting for the next clue to the fabled Lost Treasure of Santa Maria—all before the Parade of the Pirates ends in three days’ time.Join the Joneses and the pirateers on their second hair-raising, humorous adventure as they are chased over rooftops, through tunnels, and seemingly across the sea itself by the one who wants to find James more than anything.

Suzanne Westgate is a mother and lawyer who never let go of her inner pirate. She grew up in a small harbourside town, often kayaking to shelly islands after school. In her early twenties, Suzanne backpacked through South America and Asia, and her adventures-sailing, caving, mountaineering, surfing, diving in the Caribbean with a crew of prisoners on parole, abseiling, skiing down a live volcano (mostly on her bottom), blowing things up with dynamite, and very nearly getting kidnapped-helped inspire the Joneses and the Pirateers. Suzanne and her family live in Sydney, where they enjoy their own adventures, treasure hunts, dance-offs, booby traps, and pirate-themed birthday parties. To make it count, all royalties from this book are donated to charities for real lost children - starting with Project Futures - which supports safe houses for trafficked children (and women) in Cambodia and Australia.