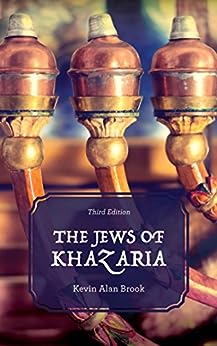 英語版 Kevin Alan Brook (著) 形式: Kindle版
すべての形式と版を表示
Sorry, there was a problem loading this page. Try again.
The Jews of Khazaria explores the history and culture of Khazaria—a large empire in eastern Europe (located in present-day Ukraine and Russia) in the early Middle Ages noted for its adoption of the Jewish religion. The third edition of this modern classic features new and updated material throughout, including new archaeological findings, new genetic evidence, and new information about the migration of the Khazars.

Though little-known today, Khazaria was one of the largest political formations of its time—an economic and cultural power connected to several important trade routes and known for its religious tolerance. After the royal family converted to Judaism in the ninth century, many nobles and common people did likewise. The Khazars were ruled by a succession of Jewish kings and adopted many hallmarks of Jewish civilization, including study of the Torah and Talmud, Hebrew script, and the observance of Jewish holidays. The third edition of The Jews of Khazaria tells the compelling true story of this kingdom past.
続きを読む
Previous page
Next page
販売： Amazon Services International, Inc.
【買取サービス】 Amazonアカウントを使用して簡単お申し込み。売りたいと思った時に、宅配買取もしくは出張買取を選択してご利用いただけます。 今すぐチェック。

This is a fine analysis of a unique 'Jewish' community, adding archaeological and genetic evidence to the extensive array of chronicles and anecdotal evidence found in his earlier editions. With appendices, extensive notes and bibliography, it is an appropriate addition to any Judaica library.--AJL Newsletter

This third, revised edition of Kevin Brook's well-received publication succeeds in elucidating controversial issues, while contextualizing the Khazar polity within the competitive ninth- to eleventh-century world. As a full exploration in English of the history and culture of the Khazars, this volume is without equal.--Edward J. Lazzerini, Indiana University
--このテキストは、hardcover版に関連付けられています。

Kevin Alan Brook is an American historian and genetic genealogy consultant who has researched the Khazars since 1993. He contributed an article about the Khazars to The Encyclopaedia of Judaism, second edition, and wrote an introduction for Rabbi Daniel Korobkin's translation of The Kuzari. He also researches Sephardic Jewish migrations throughout the world and the presence of Jewish ancestry among Latin Americans, Sicilians, and Slavs. His website is Khazaria.com. --このテキストは、hardcover版に関連付けられています。

Mac McAleer
5つ星のうち3.0 The third force
2012年5月16日に英国でレビュー済み
Amazonで購入
I liked this book. It is more detailed than some other publications which mention the Khazars but leads to the same question: Are the Khazars substantially or partially the ancestors of the east European Jewry? The author suggests that the Khazarian Jews may represent 25% of Ashkenazic Jews and up to 60% of the Ukrainian Jews.

The Khazars were a mainly Turkic people, a cultural-linguistic group rather than an ethnicity, who migrated westward into southern Russia. Originally shamanistic, they converted to Judaism in the early medieval period and became an important third force balancing the Christian Byzantine Empire and the Islamic imperium.

These partly nomadic pastoralists, partly urbanised traders, were aggressively expansionist. Relations with Byzantium oscillated between friendship and war. These relations worsened when the Khazars adopted Judaism, a religion that the Byzantines were actively persecuting.

The Arab-Khazars wars lasted over a century, starting with the Arab expansion following the emergence of the new Arab religion. Eventually their respective territories were stabilised with the Khazars north of, and the Arabs south of, the Caucasus. This prevented the Islamic conquest of eastern Europe. With the Rus, the proto-Russians, there was continuous conflict. There was also some conflict with the Magyars as they moved westward, but when this nation reached its final destination of Hungary they were joined by many Khazars.

The Kazarian Empire was gradually destroyed, first by the Rus, then by the Rus in alliance with the Byzantines. The last remnants of the Khazars were obliterated by the Mongol Golden Horde. This was a tough neighbourhood.

THE BOOK is often too detailed and too arcane, particularly in the chapters describing the early years of the Khazars. These have the feel of a book by a local history society, where all the facts about an area are collected together regardless of editorial discipline. Many of these could have been incorporated in the Notes rather than the main text. Western European readers will find a confusion of unfamiliar and similar-sounding names of places, tribes and nations, often migrating, making it seem like a sci-fi space opera.

Irrationally, I was annoyed by the frequent use of the word toponym. I would have preferred place name. I am sure toponym is a more precise term, but this did not stop my irritation.

RECOMMENDATION: This book must have been a labour of love and should be respected. The details are included because they may not be readily available elsewhere, and if they are available they are probably in Russian, Hungarian, Hebrew, Polish etc. I would recommend it to potential readers, but only if they feel they have an interest in early medieval Eurasian history or in the possible origins of east European Jewry.

To quote the author at the end of the Introduction "I felt compelled to write this book because I want to make the world of the Khazars more accessible to both the average reader and the scholar. Only a precious few extensive studies on the Khazars have been published in the English language in recent times. I am pleased to present this book in the hope that awareness of the Khazar Empire and our Jewish roots will be heightened."

THE CHAPTERS are all prefixed by a brief summary and post-fixed with notes. The chapters are followed by an appendix "A Timeline of Khazar History", a glossary, an extensive bibliography and an index.
1 The Origin of the Khazars
2 The Cities and Towns of the Khazars
3 The Structure of the Khazar Government
4 The Khazar Way of Life
5 Khazarian Trade
6 The Khazar's Conversion to Judaism
7 Relations between the Khazars and Other Peoples
8 The Decline and Fall of the Khazar empire
9 The Diaspora of the Khazars
10 The Phenomenon of Proselytism
11 Eastern and Central European Jews after the Tenth Century

SELECTED LINKS
Shlomo Sand  The Invention of the Jewish People
Arthur Koestler  The Thirteenth Tribe The Khazar Empire and Its Heritage
Paul Wexler  Non-Jewish Origins of the Sephardic Jews ;
The Ashkenazic Jews: A Slavo-Turkic People in Search of a Jewish Identity
続きを読む
7人のお客様がこれが役に立ったと考えています
違反を報告する
レビュー を日本語に翻訳する

Marco Antunes
5つ星のうち5.0 Great. Non biased. Full of reliable historical and Generic sources.
2018年10月12日に英国でレビュー済み
Amazonで購入
Great. Finally a non biased book, about the khazars. Who they were, how they came to power, and after thier destruction where they went. When and how the elite converted to Judaism. The book shows that the khazar empire was multi ethnic, economically powerful, a safe retreat for Jews around the known world. Also this book proves the overall consensus that the khazars are not the origin of Ashkenazim.
続きを読む
違反を報告する
レビュー を日本語に翻訳する

Leo
5つ星のうち3.0 Interesting introduction to the Khazar civilisation
2016年5月9日に英国でレビュー済み
Amazonで購入
The book is taking care of fascinating and interesting topic. However is not really "solid" in his thesis and sometimes lacks of a clear and whole narrative
続きを読む
違反を報告する
レビュー を日本語に翻訳する

Aldo C. Marturano
5つ星のうち5.0 One of the best books written on the Khazars
2012年9月29日にイタリアでレビュー済み
Amazonで購入
I know the author well, as I had he occasion to exchange many comments with him. He is very accurate in his researches and reliable even in the hypotheses that he, a few times indeed, sets up to clarify some obscure event. I recommend every reader of any education to read this book if he wants to broaden up his views in the European, Middle Ages and Jews' history.
続きを読む
違反を報告する
レビュー を日本語に翻訳する