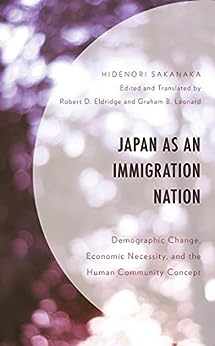 Hidenori Sakanaka established the Japan Immigration Policy Institute and is the author of almost two dozen books about immigration policy in Japan.

In this urgent appeal to Japanese policy makers and the public, Hidenori Sakanaka demonstrates the critical importance of forging a revolutionary immigration policy if Japan is to avoid population collapse and economic ruin as a result of its extremely low birthrates and aging population. As Japan's leading mind on immigration policy, Sakanaka's plan to incorporate 10 million immigrants as permanent residents (and citizens, if they choose) over the next 50 years is passionate, visionary, carefully forged, and practical. It focuses on nurturing immigrant youth (including refugees), through education, training, job placement, and social supports. Drawing on a growing sense of urgency among Japanese youth, Sakanaka envisions the birth of a lively hybrid Japan and diverse human community with implications far beyond its own borders.--Terry E. MacDougall, Stanford University

Bringing his longstanding experience as a Japanese public official involved in immigration control and as an advocate for proactive migration policies of Japan to bear, the author--known as "Mr. Immigration"--not only argues for making Japan into a country of immigration, but also sketches a bold vision of a "global human community" geared towards the peaceful coexistence of people with diverse backgrounds. This book is essential reading for anyone interested in Japanese immigration policies and global migration issues.--Takashi Kibe, International Christian University --このテキストは、hardcover版に関連付けられています。