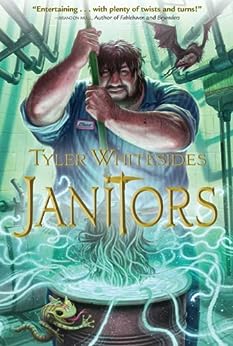 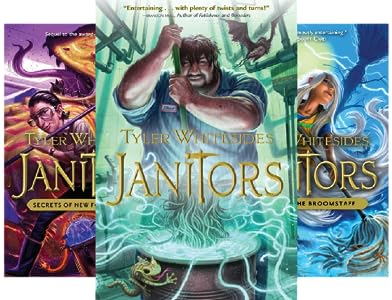 "Action-packed and surprising! Readers will become convinced of the value of telling the truth, while having a lot of fun along the way."--PublishersWeekly
-- "Publishers Weekly"

Tyler Whitesides worked as a janitor at an elementary school to put himself through college. He is the bestselling author of the Janitors series. He graduated from Utah State with a degree in music. In addition to writing YA novels, Tyler is an avid composer and arranger of instrumental music. He and his wife live in Logan, Utah.
--このテキストは、paperback版に関連付けられています。

Dena
5つ星のうち3.0 Fun Book for Middle Grade Kids
2014年9月14日にアメリカ合衆国でレビュー済み
Amazonで購入
Magic and adventure awaits! When Spencer washes his face with a suspicious soap at school, he suddenly starts seeing creatures everywhere. Things get even stranger when he is approached by a man that wants him to steal something from the janitors at his school. Together with his new friend Daisy, Spencer embarks on a mission to figure out what is really going on at school.

I really liked a lot of things about this book. First off, it was pretty fun to read. Kids will like the magic and unlikely heroes that live within its pages. The characters are likeable and the janitors (especially Marv) are fantastic.

The only downside to this book is that it is very similar to every other middle grade fantasy out there. The characters learn about a magical world hidden from everyone else and engage in multiple fights and battles to save the world. If your child has read a lot of fantasy, they might find the similarities tedious. Otherwise, it's a fun, action packed, magical romp through an elementary school's halls.

SJJM
5つ星のうち4.0 Janitors is original and entertaining.
2014年3月19日にアメリカ合衆国でレビュー済み
Amazonで購入
The first thing that attracted me to this book, and (in due course) the others in the series, was the cover. I think it’s awesome, and it successfully grabbed my interest in the ocean of books that circle the globe.

Janitors is a story that I find very original. It takes an occupation that we all know exists, that we don't take much notice of, that we all take for granted, and turns it on its head and presents it in a way that I would never have imagined.

Armed with some quite traditional cleaning tools, three teens (Spencer, Daisy, Dez) become embroiled in a bitter battle between two opposing teams of Janitors at their school. One side trying to ensure the kids have the best chance of learning, and the other trying its best to stop them from learning.

Each of the main kid characters are unique, they have their own set of struggles to deal with from day to day. None of them are friends with each other - quite the opposite, actually. They are brought together following Spencer’s discovery of some rather creepy critters that inhabit the school, sapping the thoughts from the kids.

Notice to parents: This book reveals the truth behind why many kids don't learn to their full potential. Parents who read this will learn something - it's not the kids being lazy at all, it's actually invisible pests called Toxites (Rubbish, Filth, Grime) that are the problem. I bet that until now, you all thought it was the kids’ fault.

Who ever thought that the humble school Janitor could actually be a magical wizard who is protecting our kids from harm. This book reveals that Janitors are actually like silent superheroes that linger in the background stopping the baddies. Sadly, it also demonstrates that they never get any credit for their heroics against the Toxites (it must be hard to be taken for granted). This is the very original and amusing concept of this book.

The plot has a few twists that may catch lazy readers out if they aren't paying attention, but there’s plenty of action to keep the reader engaged. Some unanswered questions will undoubtedly be expanded upon in plots for subsequent books for the series.

My bottom line: I enjoyed the originality of the story. Never before have I read about (or even contemplated) janitors having such amazing powers. I'll never look at a janitor in the same way, I'll always be wondering which side they’re on.

Note: I don't claim to be a pro-reviewer, I am a reader. My reviews are based on my personal thoughts around the story that the book is trying to tell. I try to focus on the story (which is the reason I read) rather than dissect the book and pass comment on typos, writing style or structure.
続きを読む
違反を報告
レビュー を日本語に翻訳する

Mr Karats
5つ星のうち3.0 an entertaining read for Middle Graders
2013年9月22日にアメリカ合衆国でレビュー済み
Amazonで購入
Janitors introduces a rather authentic concept which if mentioned in a review can be considered a major spoiler, as nothing else is more important than the premise in this book.

Here it goes [spoiler]: janitors hold secret magic. they experiment with ways to suck mental energy from students all over U.S. (and possibly the world). And Spencer -the main character, a 12 year old student- is assigned the task (by the U.S. government) to deal with one of the most dangerous warlock-janitors, the one who poses as the boss of janitors in his school. Through the use of a mgical soap, Spencer gets to see the creatures the janitors use to suck mental energy from the people around them. (end of spoiler)

Spencer, the main character, is a 12 year old boy who has just moved in the small town (don't recall the name). He's trying to adjust to new groups and the new way of life. While dealing with the new reality he's thrown into when he uses a 'special soap' to clean his face from a prank, he also has to deal with bullies and Daisy 'Gullible' Gates, a girl in his class that seems to be the only one to believe him when he starts seeing things crawling in the corridors or behind the teachers during class.

Janitors is a well-written novel that moves with ease and a moderate but enjoyable pace. It's recommended to MG readers or even to YA that enjoy the naivete of a lighter read.
続きを読む
違反を報告
レビュー を日本語に翻訳する

Heidi Grange
5つ星のうち5.0 Magic at school
2011年11月26日にアメリカ合衆国でレビュー済み
Amazonで購入
Maybe it's because I work in a school that I enjoyed this so much, janitors with special tools, critters that suck brain power from students, what great concepts. I know the janitor at my school is a valuable ally and I think it's a great idea making them into fighters of not only mess and dirt, but loss of learning as well. In the author description on the back of the book it mentions that the author (Tyler Whitesides) worked as a janitor at a middle school for a time. It shows in the details about the different tools janitors use to do their jobs.

I enjoyed the main characters as well, Spencer and Daisy are ordinary kids called upon to do extraordinary things. I liked the fact that both Spencer and Daisy have their strengths and their weaknesses, and also how their strengths sometimes were their weaknesses. Spencer is a bit OCD when it comes to cleanliness and this strength/weakness is what gets him involved with the janitors and the Toxites (invisible critters that run around the school sucking up children's brain waves) in the first place. But once Spencer realizes what's at stake he faces his weaknesses for the betterment of all, even when doing to right thing comes at a heavy price. Daisy is very trusting and believing, unfortunately, people use this against her, through the story Daisy starts to see that not everything she is told can be trusted. Both characters grow in ways that are very believable.

The story moves at a brisk pace allowing the reader to move swiftly through its pages. From Spencer's struggles with a bully to his run ins with various Toxites and his confrontations with his mother, the janitors, and other adults, the plot gives us much to think about and discuss as well as enjoy. I appreciated the fact that while some of the problems introduced in the book were resolved, it's not a happily ever after story. Serious problems remain to be solved, while still giving the reader some closure. All too many series these days leave the reader hanging at the end of each book, which while acceptable, can be irritating at times. While Whitesides clearly leaves the ending open for future books, there is a certain amount of closure.

I recommend this book to those who enjoy a good adventure with a dash of magic and a good dose of imagination thrown in.
続きを読む
3人のお客様がこれが役に立ったと考えています
違反を報告
レビュー を日本語に翻訳する

Doug S.
5つ星のうち5.0 Love it!!!!
2018年2月6日にアメリカ合衆国でレビュー済み
Amazonで購入
I would read this book 100 times again if I wanted to! It is a action packed, friendship loving book. I would recommend it to anyone who has a interest in monsters taking over. I recommend it to people as young as eight, to kids as old as 12! Thank you Tyler Whiteside, (sorry for putting Whiteside instead of your real name. Course you auto correct!) For opening my eyes to this magical world you have made possible.- Peanut Butter Jelly 5
続きを読む
1人のお客様がこれが役に立ったと考えています
違反を報告
レビュー を日本語に翻訳する
すべてのレビューを参照します
トップへ戻る
Amazonについて
Amazonでビジネス
Amazonでのお支払い
ヘルプ＆ガイド
日本語ショッピングのための言語を選択します。 日本ショッピングのための国/地域を選択します。
© 1996-2020, Amazon.com, Inc. or its affiliates