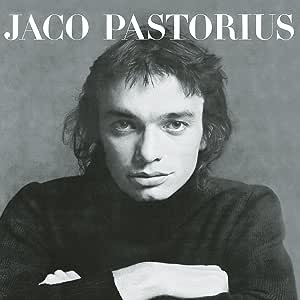 In 1976, the first 10 minutes of this eponymous disc took the listener on a jazz world cruise directed by the instrumentalist-composer Jaco Pastorius, who thus gave notice that there was a new sheriff in town and that narrow definitions of jazz would simply not do. More so even than his groundbreaking work as a member of Weather Report, Jaco's music on this, his debut album as a leader (and in a trio setting with his soulmate Pat Metheny on the guitarist's maiden voyage, Bright Size Life), defines his greatness, his outreach, and his ambition. Boppish changes à la Miles Davis come through with Jaco's incredible touch, tone phrasing, and rhythmic locomotion--as does the musical leap of faith from bebop to funky-butt R&B delivered with lyrical majesty on Jaco's aptly titled "Continuum."

This reissue greatly enhances the fidelity of Jaco Pastorius, particularly in the bassist's famous, elusive tone, from lightly chorused, vocal-tenorlike glissandos on "Continuum" and the bell-like harmonics of "Portrait of Tracy" to his percussive, hand-drumlike rhythmic cycles underneath Peter Gordon's august French horn on "Oknokole Y Trompa." Even more stunning are the manner in which Jaco deploys a steel drum choir underneath Wayne Shorter on "Opus Pocus" and the ferocious Latin-inflected groove Jaco, Lenny White, and Don Alias conjure under Herbie Hancock on two takes--one unissued until now--of "(Used to Be a) Cha-Cha." Pat Metheny contributes an extraordinary set of liner notes to this set, putting Jaco's contributions to jazz and the bass in sharp perspective. Still, a spirit of innovation and discovery suffuses every note on Jaco Pastorius, and it is startling how modern and engaging this music remains. --Chip Stern

Frankie Five Angels
5つ星のうち5.0 Jazz Establishment and Jaco ..... sad story and great solo album that it's must have
2017年2月26日に英国でレビュー済み
Amazonで購入
This album which is called simply Jaco Pastorius, is probably the best of Jaco (RIP) after his brilliance with Weather Report's best times alongside Zawinul, Wayne Shorter and Peter Erskine, which I think was the best WR formation, with all due respect for the others...

It is IMO better than the other Jaco's project, Word of Mouth, and the jams recordings with Lagrene Bireli, and so forth. In here there is not only technical abilities and playing virtuoso on the instrument, but so many emotions are running here with "Continuum", "Portrait Of Tracy" and tracks where he is really throwing in the kitchen sink as "Cha-Cha" in 2 takes, 6/4 Jam.

This is a special moment in my collection which always reminds me what a man John Francis Pastorius III aka Jaco was and how the "jazz" establishment treated him when he was alive, only to realize what a genius and they then all paid tribute like Pat Metheny which I always thought was his nemesis, musically I mean.
続きを読む
4人のお客様がこれが役に立ったと考えています
違反を報告
レビュー を日本語に翻訳する

Philip
5つ星のうち5.0 Mr Bass Guitar
2019年8月25日に英国でレビュー済み
Amazonで購入
One of the best Bass Guitar Players ever.
Alexis Korner introduced me to his music and he was in "Weather Report".
If you want to put the music in a box it is probably Jazz but I just call it good music.
If you like music you will like this as it is funky riff bassed tunes.....with emphasis on the bassed.
The track with Sam & Dave singing is just such a classic but it is mainly instrumental.
続きを読む
2人のお客様がこれが役に立ったと考えています
違反を報告
レビュー を日本語に翻訳する