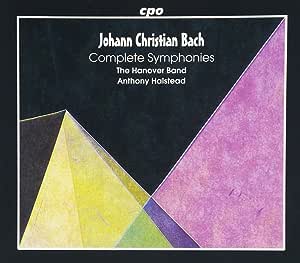 Marcus Horatius
5つ星のうち4.0 Wonderful music, capably performed
2004年3月19日に英国でレビュー済み
Amazonで購入
This five-disc set provides ample opportunity to appreciate the warm musical personality of JC Bach, the "London Bach", youngest and most famous (in his own day) son of Johann Sebastian Bach. His sunny rococo idiom must have seemed fresh and revitalising to London audiences back in the 1770s when Handel's shadow still dominated most music-making. Although later eclipsed by the far greater achievements of Mozart (who was, incidentally, an enthusiastic admirer of JC), Bach's music still sounds vibrant and fresh today.
It's true that these symphonies occasionally fall back on cliche--with the odd flashy, brilliant passage substituting for inspiration--but for the most part they are elegantly crafted, with outer movements characterised by graceful rhetorical gestures and chock full of melodic invention; and deceptively simple slow movements where Bach's loveliest, most affecting writing is in evidence.
Anthony Halstead and the period-instrument Hanover Band are enthusiatic interpreters, albeit not always as smooth and elegant as the music demands. The collection also presents multiple versions of some symphonies with alternative scoring--notably the Op. 9 disc, which has two versions each for two works, one for a regular ensemble of strings with oboes, another scored more colourfully with extra clarinets and bassoon parts--the latter are claimed to be Bach's original orchestrations which were simplified for mass publication.
It's safe to say that if you buy these five discs (and they're cheap!) you will never have a moment's regret--but you will have many, many moments of joy as a result of this delightful music.

B. T. Collins
5つ星のうち5.0 BachMy favorite classical composer after Papa Haydn and Wolfgang Amadeus
2015年2月10日にアメリカ合衆国でレビュー済み
Amazonで購入
Johann Christian Bach was born when J.S. Bach was 50 years old and the Baroque period was coming to an end. Unlike Carl Philip Emmanuel Bach (C.P.E. Bach) whose music shows dad's strong contrapuntal and baroque influence, Johann embraced the newer Galant style of music: more melody, less counterpoint and mathematical/mechanical complexity, and less stately seriousness in favor of a lighter approach. The result is very pleasing to my ears, so much so that I ended up ordering the other box sets of J.C. Bach done by the Hanover Band (bad name, btw; it should be called the Hanover orchestra). I agree with another reviewer who stated that J.C. Bach was his favorite classical composer after Papa Haydn and Wolfgang Amadeus (who thought highly of J. C., btw, and even reworked some of his themes). This is enjoyable music - not profoundly moving like J.S. Bach's Mass in b Minor but it wasn't meant to be; it was meant to more easily appreciated. The Galant style was a refreshing change from a long baroque period of ornamentation and academic composition/devices in music. There's a lot of very good music here and some gorgeous pieces (like the andante from the Grand Overture in B Flat Major). Anthony Milstead's leadership of the orchestra is excellent and the sound is first rate. If you love 18th century music, add this to your collection.
続きを読む
7人のお客様がこれが役に立ったと考えています
違反を報告
レビュー を日本語に翻訳する

Stephen Gailey
5つ星のうち5.0 A revelation.
2015年3月25日にアメリカ合衆国でレビュー済み
Amazonで購入
I was largely unfamiliar with JC Bach's orchestral works and this set proved a revelation. One can easily see his influence on the young Mozart and although Bach's symphonies do not reach the heights of inspiration of Mozart's and Haydn's most profound masterpieces they certainly equal those other master's lesser inspirations.
The Hanover Band under Anthony Halstead give full justice to JC Bach's legacy and I am grateful that this collection exists.

Mr. Halstead's interpretation of this music is quick, deft and well-paced. He has his little band moving when it needs to move and breathing when it needs to breathe. It provides a truly entertaining experience. the little orchestra is fantastic in its own right with crystal clear articulation and near perfect intonation.

As for the music itself, the earliest symphonies are staples and will be familiar to many who have heard a fair amount of 18th century music. Opus 6,8 &9 are more of the same, pleasant but not much more. Opus 18 is (Oh my God!) another story. It is complex and profound, and perhaps the finest set of symphonies written up to that time. Please understand this is music in the galant style, not the full-blown classical style that we find in late Haydn or late Mozart. Still I love it.