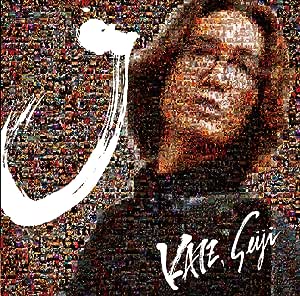 The album title "J" comes from the word Japan as Seiji Katz brings a touch of "Japanese" to his latest album. Through his soul searching of his Japanese roots, Seiji finally gave birth to this album and named it "J".


The album contains some of the classic hit covers such as "Yosaku", a Japanese classic song by the famous singer/composer Saburo Kitajima who represents the Japanese "enka (Japanese soul music)" scene, a romantic "Waltz of Stars" and a re-arranged Seiji Katz's version of the Beatles hit "I wanna be your man." Seiji also puts his playful hat on with "Pistachio" which throws you into a pub-rock arena and "Shamrock" takes you on a ride back to old Ireland.


This album is a clear representation of how an Ukulele can turn into a versatile instrument. Be sure to listen to this album!

Seiji Katz is one of the top ukulele players in Japan. Seiji's music transcends the confines of genre and his pop-rock style is like nothing else in the world.


His first ukulele solo album "CIDER POP!!" was released in summer of 2010 followed by his 2nd album "GET HAPPY!!" in 2011; both were sold-out in less than a year after being released. 3rd Album "Groovy Revolution", a 2012 release, is already out of stock. Rumor says that Seiji's albums are expected to be sold out almost immediately!


Seiji's 4th album "J" (released in November, 2013) is only available on Amazon and at live gigs and festivals. Seiji also publishes a number of scorebooks, instructional books, DVDs and his collection of re-arranged musical pieces are extremely popular. Some of these products are published internationally and also available overseas. Seiji has also been actively performing abroad at live gigs and festivals outside Japan.

ANK
5つ星のうち5.0 NOT ONLY HEART WARMING, BUT ALSO EXCITING!
2014年4月27日に日本でレビュー済み
Amazonで購入
What do ukulele lovers want to be given from music?
The answer would be beautiful, technical or good old fashioned sound, heart-warming or breezy feeling, etc...
Katz gives you all of them. Furthermore, he has one more thing!
He would be THE ONLY "ukulele rock" musician.
Katz, only himself, with his tenor-uke and just a few effectors, excites listeners so much, as well as a rock'n'roll band does.
I believe he will be welcomed not only at uke festival, but also at some big summer-fes such as Fuji Rock Festival.
I believe Katz satisfies even loud music lovers, who normally think ukulele as cheap or boring.

This CD is the one that you can enjoy Mr. Katz's world of music with variety of unique arrangements, and is a collection of beautiful songs, both covered and uncovered. Besides what Mr. Katz expresses and widens the world of the ukulele, what is remarkable is his sweet and mellow voice. I believe it is a gift from God.
There is no doubt that he has been blessed with so many musical talents. This CD brings me full of excitement, engergy, soothing feeling and so much more. This is an awesome piece. Highly recommended.
続きを読む
2人のお客様がこれが役に立ったと考えています
役に立った
違反を報告
すべてのレビューを参照します
Amazonプライム会員ならお急ぎ便、日時指定便が使い放題
さらに、映画もTV番組も見放題。200万曲が聴き放題 。クラウドに好きなだけ写真も保存可能。
> プライムを無料で試す