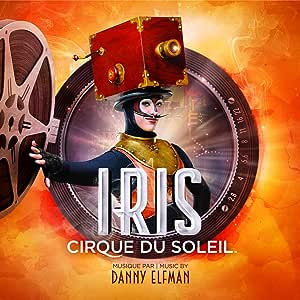 MSam
5つ星のうち5.0 Danny Elfman's Iris is stunning
2011年11月23日にアメリカ合衆国でレビュー済み
Amazonで購入
The new Iris soundtrack by Cirque du Soleil is just brilliant! Danny Elfman provides a style that is simply magical. It's incredible, a compelling and generous creation that draws upon ultra, neo-Romantic composing techniques combined with an eclectic mix of world influences all stamped with Elfman's incredible idiosyncratic pallet. There are beautiful piano melodies, exhilarating string arrangements and bold, brassy moments which render the album to be nothing short of ephemeral.

This is Elfman at his best. Working on this project for a solid two years, as opposed to the usual soundtrack deal of three months on a movie, the sound-scape of this album is so varied and dynamic it's hard to comprehend the awesomeness on a first listen. A homage to the scores of movies, this soundtrack draws upon references and reinvents popular and stereotypical movie music styles. There are shout outs to jungle blockbusters like Indiana Jones and King Kong ('Snake Women', 'Patterns'), Gothic and magical scores such as The Nightmare Before Christmas and Edward Scissorhands ('Silent Movie', 'The Twins'), the schmooze vibe tones of the trendy 20's ('Film Noir', 'Movie Studio'), and a tour-de-force homage to the syncopated beats of West Side Story ('Rooftops'). Despite their influences, all the tracks inherently original, and the experience is incredible. I'm actually running out of inventive words to use to describe it. The upbeat 'Kiriki' theme is a brilliant fusion of exhilarating rhythmic strings with bows on fire in a distinctly circus and Gothic vibe, and 'Scarlett Balancing' is simply heartbreaking - the lyrics have the potential to be corny and pandering but in this case they come across as esoteric and nebulous combined with the luscious arrangement of the orchestra and the ethereal mixing of the choir.

The most coruscating moment on the album is the exquisite and flawless 'The Broom/Flying Scarlett' arrangement. Beginning with a reprise of the opening tune shared delicately between woodwinds and a solo violin while strings flourish softly behind, the piece is utterly stunning. It provokes this incredible but practically indescribable emotion that resembles something like yearning. It's an ephemeral and achingly beautiful piano waltz paired with this forlorn, angelic voice which fragments and harmonizes itself, and slowly layers with chimes and glockenspiels which leads into the striking, driving and powerful orchestra finally taking over. The arrangement is sweeping.

It's been way too long since a soundtrack, and a Cirque du Soleil one at that, has moved and resonated with me. It's been an absolute joy to discover this wonderful soundtrack. Danny Elfman has managed to bring his own style to Cirque du Soleil without alienating or messing up its typical world flavour, and the melodies and motifs he has crafted are some of the most beautiful I think I've ever heard in a soundtrack. Iris is simply stunning - to all Elfman fans, soundtrack aficionados, and music lovers, you will not regret listening to this. Simply worldclass quality - it's good to see that the Machine du Soleil can still produce magic with the right direction.

Ash Ryan
5つ星のうち5.0 IRIS may be gone, but at least the music will live on...
2013年3月25日にアメリカ合衆国でレビュー済み
Amazonで購入
I'm so bummed that I just found out about this after the show may have closed for good, because after listening to the album I wanted to take a trip to L.A. to see it! Alas, I'm a couple of months too late...but hopefully Cirque Du Soleil will try reopening the show somewhere else at some point.

In the meantime, I have this fantastic album as a consolation prize. If you're a fan of Danny Elfman's music, you won't be disappointed. (And if you're not already a fan of his, you may become one after hearing this!) Elfman clearly had the freedom to let his imagination run wild on this project, and he obviously had a blast doing it.

The results are a bit different than his film scores...the closest comparison I could make is to his orchestral work, Serenada Schizophrana. In particular, the "Balancing Scarlett" track is reminiscent of the "I Forget" movement in some respects. But all this is still signature Elfman...almost distilled Elfman.

Elfman employs several different styles in various combinations to great effect here. There are big, brassy numbers, like "Buster's Big Opening", or gorgeous string melodies, as in "The Twins". "Patterns" employs driving percussive effects and melodic piano. "Pellicule - Part I and II", "Film Noir / Pursuit", and "Rooftops" combine elements of all of the above.

Elfman also makes use of choir and several female soloist vocal styles, from the zany "Kiriki", to the haunting "Flying Scarlett", to the ethereal beauty of "Scarlett Balancing". Even the shorter tracks are gems--"The Broom" is gorgeous, "Old Toys" is like a music box gone slightly wrong, and you can just imagine what "Clown Special Effects" is going to be in Elfman's hands. The whole thing is wrapped up nicely with "Iris Finale and Bows", which is like the Elfman-end-credits-track-to-end-all-Elfman-end-credits-tracks.

The overall effect is driving but melodic with generous touches of Elfman's trademark quirkiness, and occasional respites of haunting beauty. A very effective listening experience as a whole.

Five stars from start to finish. Pick this up and you won't regret it.

Josh Kibbey
5つ星のうち5.0 Elfman's Tribute to Film History
2015年8月22日にアメリカ合衆国でレビュー済み
Amazonで購入
There's obviously two wildly different types of music available from Danny Elfman; the earlier new wave/rock and the later movie score orchestrations. I am a fan of both. This is the score he orchestrated exclusively for the Cirque du Soleil show Iris, inspired by the history of the film art form. I have enjoyed Cirque du Soleil performances that I've seen both live and on television, yet I haven't seen Iris before. It's Elfman's involvement that sparked my interest and the unique collaboration between the two that sparked me to purchase it. It was both derivative of his previous work and wildly original, both in the positive of results, in my opinion. I think it gives you just what you might be looking for if you want more of Elfman's signature sound. Even without having seen the show you can follow the basic theme and you can also hear various homages to film history.
続きを読む
役に立った
フィードバックを送信中...
フィードバックをお寄せいただきありがとうございます。
申し訳ありませんが、お客様の投票の記録に失敗しました。もう一度試してください。
違反を報告
レビュー を日本語に翻訳する

OkieScribe
5つ星のうち5.0 Cirque du Elfman? Magnifique!
2012年1月15日にアメリカ合衆国でレビュー済み
Amazonで購入
This is arguably the best Cirque score since "O". The combination of Elfman's lyricism and wit with Cirque's flare for the intimate within the epic proves irresistible. For those of us who probably won't ever get to see this production, this recording is some recompense.

Having a film composer write the score for a show about the world of cinema was a brilliant idea. Elfman cleverly quotes his own scores on occasion (notably, "Edward Scissorhands" and "Alice in Wonderland") to great effect for those familiar with his work. At the same time, the music is a pastiche of styles from classic films that manages to suggest what one imagines must be occurring onstage. This is part of Elfman's genius, to make his work so unique and yet so evocative. No wonder directors love working with him.

For lovers of film music, Elfman's in particular, and of the unique point of view that is a Cirque du Soleil staple, this is a must-have. The "Iris Finale and Bows" track alone is worth the price of the disc. Highly recommended.
続きを読む
5人のお客様がこれが役に立ったと考えています
役に立った
フィードバックを送信中...
フィードバックをお寄せいただきありがとうございます。
申し訳ありませんが、お客様の投票の記録に失敗しました。もう一度試してください。
違反を報告
レビュー を日本語に翻訳する

TBo
5つ星のうち5.0 Meets the high standard that you expect from Danny Elfman
2014年1月25日にアメリカ合衆国でレビュー済み
Amazonで購入
Danny Elfman has been a favorite of mine since the early days of the Mystic Knights. I always heard the Oingo Boingo recordings as being symphonic compositions ala surprisingly brilliant bridges. Iris reveals a much more matured composer. I rank it up there with my favorite Nino Rota compositions.
続きを読む
役に立った
フィードバックを送信中...
フィードバックをお寄せいただきありがとうございます。
申し訳ありませんが、お客様の投票の記録に失敗しました。もう一度試してください。
違反を報告
レビュー を日本語に翻訳する
その他の国際レビューを読み込む