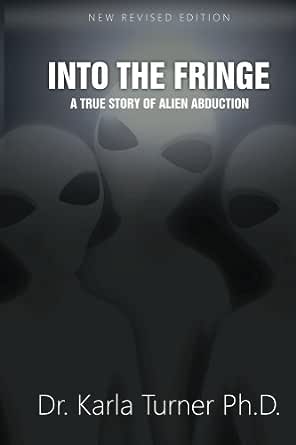 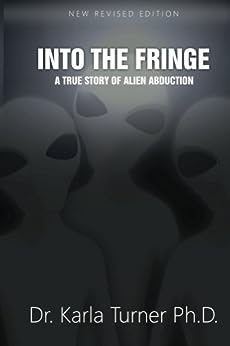 Into The Fringe: A True Story of Alien Abduction (English Edition) Kindle版

Dr. Karla Turner focused on the psychology and ethics of those alleging that they had been abducted, visited, probed and tormented by extraterrestrial beings. As a former college instructor who held a doctorate in Old English Studies as well as a B.A. and M.A. earned in both America and England respectively; Turner gave her heart and soul to help those trying to make sense of the things that didn't make sense. Dr Turner lost her battle to breast cancer in 1996 but her legacy to the paranormal field is all but not forgotten. --このテキストは、paperback版に関連付けられています。

Anglian Traveller
5つ星のうち4.0 `Into the Fringe' 2014 edition: a welcome re-issue Karla Turner's first book
2014年6月28日に英国でレビュー済み
Amazonで購入
Dr. Karla (also known as `Kandy') Turner was a professional academic (an English PhD) and educator who lived in Arizona and died of cancer on 10 January 1996 at the tragically young age of 48. For several years before her death, she worked to publicise the reality of the alien abduction phenomenon to academia and to a wider public audience. She was a popular and respected public speaker on the subject - you can find videos of her lectures on the web - and between 1992 and 1996 published three books about how this intrusive phenomenon had affected her family.

`Into the Fringe', published in 1992, was her first book and chronicles the process whereby she and her family became aware that abduction by alien entities was the likely origin of all the strange events which had been happening to them. These included multiple close-proximity sightings of UFOs, episodes of missing time (some of several hours' duration), night-time visitations, odd and often dramatic patterns of body scarring and various poltergeist-type activity experienced by different members of the family, especially by her husband Casey and son David. It's essentially a narrative written in the first person about the journey from puzzlement and ignorance to some understanding of what might be happening and their eventual reluctant acknowledgement that the abduction phenomenon, reported in such consistent detail by so many other people, was the only explanation to fit the data and that in their case the fit was an exact one.

ITF details how Turner sought help from Barbara Bartholic, Oklahoma-based long-time UFO investigator and colleague of Jacques Vallee, to help understand the phenomenon in more depth. Bartholic used some hypnosis to aid memory recovery and both Karla and Casey had several such sessions with her.

One of the author's most controversial claims was that the US Government, or elements within the Government, were actively interested in the phenomenon and occasionally abducted known alien-abductees in order to glean information from them, using drugs to control them and wipe their memories. She provides some detail, in the final chapters, of how they became convinced that these so-called `MIL-ABS' are, or rather were in the 1990s, a reality. The book also describes interactions with some human-looking entities (`hybrids?) and how abductees have recognised each other in the `everyday' world. The author did not believe these alien intrusions to be in any way benign, and was definitely not any kind of `New-Ager.'

Since the turn of the millennium, all three of Karla Turner's books have been in great demand on the second-hand book market and almost impossible to find except with high price tags. Finding even a `fair' paperback copy of ITF or `Taken' for less than US$50 has been almost impossible, with `fine' or `like new' copies demanding upwards of US$200.

Following last year's welcome re-issue of `Taken', this new 2014 edition of ITF from Wordmean Publishing is welcome not only in making this great work once again affordable for the average reader but in correcting the typos and grammatical errors in the original text, restoring this classic to its rightful place among the great works of the genre. Cask J. Thomson deserves the credit of initiating this project, with the active participation of Karla's widower Elton editing the text.

This 2014 edition of ITF has 13 untitled chapters running to 222 pages (a slightly lower page count than the 1992 original) including a short epilogue. There is no bibliography and no index.

As in the 2013 edition of `Taken' Elton introduces the book with this paragraph:

"For the sake of clarification Karla Turner passed away after a long struggle with breast cancer and underwent breast removal surgery and chemotherapy. Despite the common misconceptions it is unlikely that she was targeted by an individual, group or organization attempting to silence her."

It's a pity that Elton and the publishers felt the need to include this caution at the beginning of the 2014 edition, but evidently the antics of conspiracy theorists over the past 18 years have made it necessary.

The new edition is in paperback only; it looks like we'll never see a hardcover edition of this classic.

Question for the publishers: are we going to see a re-issue of `Masquerade of Angels'? During my correspondence with Ted Rice earlier this year, he informed me he has twice the amount of material still unpublished as featured in Turner's original book. How about an edition containing more details of Ted's story?
続きを読む
7人のお客様がこれが役に立ったと考えています
役に立った
フィードバックを送信中...
フィードバックをお寄せいただきありがとうございます。
申し訳ありませんが、お客様の投票の記録に失敗しました。もう一度試してください。
違反を報告
レビュー を日本語に翻訳する

gary
5つ星のうち5.0 Wow
2015年5月11日に英国でレビュー済み
Amazonで購入
if what's printed in this book is true then we are in for one hell of a ride in our lifetime,illegal treaty's with aliens ,abductions and intrusions sanctioned by those who are meant to protect us. Eye opening to say the least and also very worrying. Writing this review and I'm only half way through the book. Say no more. Enjoy.
続きを読む
2人のお客様がこれが役に立ったと考えています
役に立った
フィードバックを送信中...
フィードバックをお寄せいただきありがとうございます。
申し訳ありませんが、お客様の投票の記録に失敗しました。もう一度試してください。
違反を報告
レビュー を日本語に翻訳する

moe
5つ星のうち5.0 A Collectors Book for Your UFO Library
2018年10月12日にカナダでレビュー済み
Amazonで購入
This is one of those books you keep as a collectors book on ufos. Well written and thought-provoking. I wish the author had the time to have written more books before her death, however, her investigative style makes for a believable read.
Excellent.
続きを読む
役に立った
フィードバックを送信中...
フィードバックをお寄せいただきありがとうございます。
申し訳ありませんが、お客様の投票の記録に失敗しました。もう一度試してください。
違反を報告
レビュー を日本語に翻訳する

michel morin
5つ星のうち5.0 Great reading for those who question abductions!
2014年7月4日にカナダでレビュー済み
Amazonで購入
I really enjoyed her truthfulness on the abduction of her family and all the problems and insecurities it entails.
I recommend it highly as a reference book for those interested in ufo abductions.

Basalt Mountain
5つ星のうち5.0 A Little Slice of History
2014年10月22日にアメリカ合衆国でレビュー済み
Amazonで購入
The book is about a brave family and the mystifying abduction experiences they encountered. I especially appreciated the candor in which it was written. The facts were presented without embellishment. The quotes from the hypnotic regressions were quite interesting given that some didn't make a lot of sense; but to me, that meant they were most likely accurate, because the situations were of such high strangeness in and of themselves. It seemed that the abductions went from actual alien/ufo events to staged events involving a branch of the military. It made me wonder: exactly what is the agenda of this shrouded military intervention?? The author certainly was brave to come forward with all of the details. I wish to thank the author's husband for reissuing this book. The older copies were going for unbelievably exorbitant prices, some over a thousand dollars! I hope it makes this important book available to a much wider audience. It is a book that is definitely worth reading especially because the material is, unfortunately, such a "fringe" topic. Remember, it is only one part of the entire alien/UFO phenomena that has been unfolding over this past century. This should be kept in mind while reading. My heart went out to this family :(
続きを読む
20人のお客様がこれが役に立ったと考えています
役に立った
フィードバックを送信中...
フィードバックをお寄せいただきありがとうございます。
申し訳ありませんが、お客様の投票の記録に失敗しました。もう一度試してください。
違反を報告
レビュー を日本語に翻訳する

ryan
5つ星のうち5.0 Must have, timeless paranormal classic!
2015年2月25日にアメリカ合衆国でレビュー済み
Amazonで購入
Into The Fringe by Dr. Karla Turner is a standard for all UFO/paranormal enthusiasts as are each of her other books. This book is #2 of a 3 book series including "Taken" as the first installment and "Masquerade of Angels" as the final. Into The Fringe follows her own personal experiences and those of her family members as they first realize they are a part of the abduction phenomena and all of the "fringe" elements that accompany such odd experiences. It paints a vivid portrait of what abductees go through as they first realize something is off and then each step and emotion as they travel further down the rabbit hole. Although I personally feel "Taken" was the best of these books, "Fringe" cannot be discounted. It is still well above the average UFO/Abduction tale and still very relevant and important today some 20 years after initially being published. Any serious ufo buffs should have all 3 if these books added to their collection and none of them will disappoint.
続きを読む
10人のお客様がこれが役に立ったと考えています
役に立った
フィードバックを送信中...
フィードバックをお寄せいただきありがとうございます。
申し訳ありませんが、お客様の投票の記録に失敗しました。もう一度試してください。
違反を報告
レビュー を日本語に翻訳する

Snooper's Mom
5つ星のうち5.0 Dr. Turner's books are analytical and excellent!
2016年8月13日にアメリカ合衆国でレビュー済み
Amazonで購入
I had both of the reissued Karla Turner books for a while, and finally read them. Wow ! A tremendous amount of information is here in both books. First of all, what I like, is Karla was a PhD in English Lit and does she ever write well. I am so tired of poorly written, grammatically incorrect UFO books. It takes away from their message. Her messages are spot on. My only thought is, if this were happening to me, I'd be going to my Senator and Rep in Congress and demanding action. There is no mention ever of anyone going to the authorities to complain. I do believe our govt knows this is going on and can do nothing. Thanks for the reissues, they are great.
続きを読む
5人のお客様がこれが役に立ったと考えています
役に立った
フィードバックを送信中...
フィードバックをお寄せいただきありがとうございます。
申し訳ありませんが、お客様の投票の記録に失敗しました。もう一度試してください。
違反を報告
レビュー を日本語に翻訳する