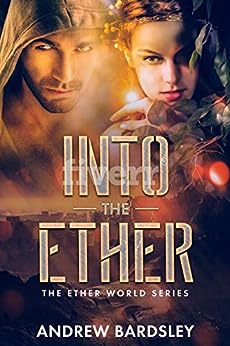 Into the Ether: An Urban Fantasy Action Adventure: The Ether World Series

Chris Smith, a brilliant researcher, is the first person to discover an entirely new branch of magic inscriptions. The four elemental pillars have been used since mankind learned to scribe, but the world is about to change with the realization that space-time can also be affected.

Chris is ready to lead the charge in making the new world, operating out of a magical start-up with his closest friend. His ideas will be just the beginning. However, when Chris is betrayed, his life is sent spinning in a chaotic downward spiral, leaving him with nothing but his wits.
Engaging and fast-paced ‘Into the Ether’ spins a story of magic, intrigue, and determination.

The following is an Extract from the book:

Chris delayed a few moments longer until he heard the sound of a group of charging footsteps. As Chris looked back, he saw about seven men from the Panther gang running towards the other thugs. The lead fighter of the Panther gang stopped at about two meters distance away from the five thugs and made a sudden movement with his gloved hand. Out of his hand, a bolt of electricity shot out and hit one of the five. The bolt at first, fizzed over some protective clothing without effect and then the thug who was the target started to spasm in pain. The man finally collapsed onto the ground, and the electricity stopped, as the gloved Panther made another hand gesture. With one down the four thugs were attacked using stun rods, two of the thugs that were left activated the inscriptions on their clothing to flare with the absorption of power but were eventually taken down by the sheer overwhelming force of all seven Panthers. All of the Panthers were well armed and protected by magical devices that glowed with use.

This book touches all ranges of emotion and has the ability to jump genres...

The conflict between the criminal gangs, was quickly over and the leader of the Panthers pulled out a farseeing device for instruction on what to do with the other gang members. Soon a magical hovering platform arrived, and the rival gang members were loaded on to it. A large sheet was then used to cover them as they were taken away.