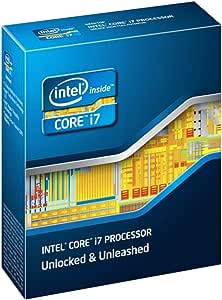 Its my favorite processsor of all time, i am so happy with this processor, its amazing.

Not much more to say, i am Lucky to have one and i could not be more happy
Motherboard was expensive but Worth every penny, for exemple when i load a match in a moba
game it took around 1 or 2 minutes to load game with my AMD processor (one of the best proc
in AMD) and it takes around max 5sec or less with my intel 3930k!!!!
続きを読む
違反を報告
レビュー を日本語に翻訳する

I went with the 3930K for a new computer in May 2012, and to this day (December 2013), it still runs just as well as day 1. Even though Ivy Bridge, Haswell, and Ivy Bridge E CPUs have since been released, I don't see a reason to upgrade. The six cores turbo-boosted to 3.8 GHz is more than enough for most people. I originally built this machine for gaming, but have since converted to a development workstation. Although targeted at gamers and enthusiasts, this chip would be overkill for gaming. Since I run a lot of multi-threaded applications, this CPU is perfect for me. This CPU is pretty expensive, but when there's virtually no competitors, there's not much that can be done about it.

I don't have a need to overclock, but I tried it out, and it was very easy. Playing with the unlocked multiplier yields really good results. Without trying much, I was able to get to 4.5 GHz with a heatsink/fan pretty easily. I imagine it can get close to 5 GHz when watercooled.

I paired this CPU with the Asus Rampage IV Extreme motherboard and cooled it with the Noctua NH-D14.
続きを読む
2人のお客様がこれが役に立ったと考えています
違反を報告
レビュー を日本語に翻訳する

George Williams
5つ星のうち5.0 Very awesome cpu
2012年5月7日にアメリカ合衆国でレビュー済み
Amazonで購入
I upgraded to this cpu from a Q6600 and let me tell you that the difference is amazing. Even when this chip is under load while rendering video in Sony Vegas my computer is very responsive. I am running it at stock clocks for the time being just to break it in. This cpu is strong enough to even play almost any of the most demanding emulated games around (LLE sound Tales of Symphonia and Zone of the Enders) at playable frame rates. If you are thinking about getting the 3960X DON'T! It only has a very small boost in performance for nearly twice the price, stick with this one.

An interesting factoid though, this and the 60X were originally 8 core cpus. Intel disabled two cores for some reason, probably because AMD is not pressuring them in the slightest to compete. I do not know if it is possible but Intel may enable these at a future date (hoping they do anyway).

This chip can handle nearly anything you throw at it and at reasonable temperatures. Under full load it maxes out at 58C using the Corsair H100 and idles at 26C to 30C. It has some massive over clocking potential, the highest stable clock I have read about was 4.75Ghz; some have made it to 5Ghz but not stably.
続きを読む
2人のお客様がこれが役に立ったと考えています
違反を報告
レビュー を日本語に翻訳する

Michael
5つ星のうち5.0 Great CPU
2012年9月24日にアメリカ合衆国でレビュー済み
Amazonで購入
Nice and fast and stable. Got PCIe 3 to work with my EVGA GeForce GTX 680 FTW+ 4GB and Nvidia drivers with their patch fix. Using with ASUS P9X79 WS motherboard and 32GB Corsair Dominator quad channel RAM. Everything runs smoothly and is easy to overclock, not that I really need to with this CPU anyway. Still, speeds up encoding and rendering a bit, if needed. Works great for gaming, but might be a bit excessive, having less than fully used capabilities, if that's your main use of your computer.

Just thought I'd let you guys know that I'm easily and safely overclocking this chip up to 4.6GHz fully loaded under my somewhat higher-end air cooler with a VCore of 1.35 volts.

Nice and stable crunching power. This chip seems to handle anything and everything. It's even dynamically fully loaded nearly 24/7 crunching for scientific research seamlessly in the background while I go about my other normal computer use, which probably includes most of what you might think of, and maybe then some.
続きを読む
違反を報告
レビュー を日本語に翻訳する

I'm not a clocker (yet), so I can't comment on unleashing this CPU's full potential. But, my typical desktop workspace normally consists of simultaneous launches of Internet Explorer, active backup software, anti-virus and Malwarebytes, iTunes playing music, 2 additional on-line applications and photo processing. At the peak of my activity, I've yet to register over 10% CPU usage. This is amazing really, considering that Memeo Backups used to consume 80-90% of my old CPU's usage.
続きを読む
違反を報告
レビュー を日本語に翻訳する
すべてのレビューを参照します
同様の商品をご覧になりませんか？ こちらのリンクで参照ください。レビュー高評価商品CPU
Amazonプライム会員ならお急ぎ便、日時指定便が使い放題
さらに、映画もTV番組も見放題。200万曲が聴き放題 。クラウドに好きなだけ写真も保存可能。
> プライムを無料で試す