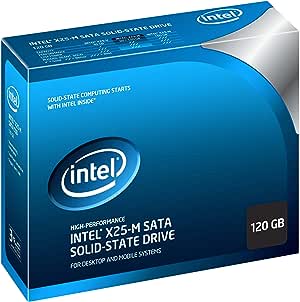 D. Coral
5つ星のうち5.0 The best computer upgrade
2011年2月14日にアメリカ合衆国でレビュー済み
Amazonで購入
A few years ago I built a custom computer and I wasn't sure why Windows 64-bit felt kind of sluggish (Abit IP35 Pro, Intel Q6600, 2x WD 750AAKS RAID 0, 8GB RAM). I figured the memory timing was just a bit slow, especially when combined with the 32 to 64 bit WoW64 translation layer. Or, I thought maybe I need a faster processor. Well I just added this Intel X25M as the Windows boot drive, and the difference is like night and day! I am blown away! It wasn't the memory or CPU after all, it was the slow disk access that was making the UI feel sluggish before. Now, large applications install in a second or two rather than minutes. Application windows pop up much faster. Web browsing is lightning fast. My Windows Experience Score for the disk subsystem changed from 5.1 to 7.1.

Before I bought two of these SSD drives I was thinking of putting them in RAID 0, but I am glad I kept them configured as single drives because they are plenty fast, and this way it can take take advantage of the Win7 TRIM command to maintain the drive memory cells after writes (currently it's not possible to use TRIM in a RAID configuration). Think of TRIM as the SSD housekeeping issue - much different from defrag on mechanical drives, but both types of drives need their respective automatic maintenance.

If you can't decide on what part of the computer to upgrade - try this first! It may be that the hard drive is really the bottleneck, as I discovered. 120GB is a good capacity for a boot drive. A full featured Windows 7 install along with a few applications typically uses up around 30GB or more.

This package comes with a 2.5" to 3.5" bracket, a SATA cable, a short power cable, various mounting screws, and a CD guide.
続きを読む

Raed Khaddaj
5つ星のうち5.0 Super Fast - Hard Drive idle most of the time waiting for you
2011年3月10日にアメリカ合衆国でレビュー済み
Amazonで購入
I never imagined working on a computer without waiting for endless system activities to finish doing their job until the system is responsive again. with Intel SSD om my core i5 Laptop with Windows 7 I can:

1. Start the computer from power off to Windows Login screen in 30 Seconds
2. After I enter the password, the desktop is the with 90 Processes in my Task manager all started in another 15 seconds.
3. I can start MS Outlook 2007, Firefox Browser with 6 tabs saved, Start Excel with a document I uses, Start MS Visual Studio 2008 all in another 15 seconds
4. total of the above 1 minute or less
5. I can start 2 virtual server machines and continue browsing the Internet and working on other open applications
6. I can start 2 parallel video transcoding session using AnyVideoConverter Free edition from Quicktime to AVI
7. ALl of the above running in less than 2 minutes from power ON and the system is busy with CPU near 99% but still very responsive to work and switch between my open applications

do you thing this is possible with regular Hard Drive? My answer IS Big NOOOOOOOOOO

Intel SSD 120GB is a big step in the computing experience

JoJo
5つ星のうち5.0 Much snappier, shock-proof, silent, but 120GB fills up fast
2011年4月14日にアメリカ合衆国でレビュー済み
Amazonで購入
Installed this in a 2009 MacBook Pro 13 (2.26GHz) running OSX Snow Leopard and Windows 7 64-bit and it works great. Programs just open instantly and I don't have to worry as much about damaging a spinning drive if I put the laptop down too hard. The hard drive is probably the slowest component in a computer so upgrading this makes a very noticeable difference. I also like how most of the time, my laptop is now completely silent and vibration free.

On the downside, I've already found that 120GB is not a lot of space, especially when using BootCamp. I have my OSX/Win7 split 40/80 and there is barely enough room for my iTunes library, StarCraft II and video editing on the Windows side.

Just a couple notes if you have a MacBook:
- To replace the MacBook drive, I used a precision Philips screwdriver to remove the bottom of the mac (be careful about not mixing up the screws as some are different lengths) and a Torx T-6 bit to remove the special screw/peg things to mount the SSD to the Mac's rubber drive mounts.
- Also don't forget to transfer the plastic sticky tab that helps you pull up the drive to your new drive.
- I don't think Snow Leopard 10.6.7 supports TRIM (a wear-leveling SSD thing to make the drive last longer and perform better), so you'll have to wait until Lion comes out. Win7 supports it though.
続きを読む
2人のお客様がこれが役に立ったと考えています
役に立った
フィードバックを送信中...
フィードバックをお寄せいただきありがとうございます。
申し訳ありませんが、お客様の投票の記録に失敗しました。もう一度試してください。
違反を報告
レビュー を日本語に翻訳する

Frank H.
5つ星のうち5.0 Amazing Performance
2011年1月10日にアメリカ合衆国でレビュー済み
Amazonで購入
First off, a note to anyone having a problem w/ Phoenix BIOS not recognizing this drive: I experienced the same problem and, after much frustration, figured out a solution. You must reset the BIOS by removing the BIOS battery (small "button" type battery, NOT the same as the main laptop battery) for 10 minutes. On my laptop (Acer 7551G), the battery is located in the lower-left corner near the sound jack - you don't have to completely disassemble the laptop, just remove enough screws to pry open that corner enough to access the battery. It's also worth noting that, prior to doing this, I updated the BIOS to the latest firmware (1.15), but I don't believe this step was necessary, as it had no apparent effect.

The drive itself works great. I was expecting high-performance but am still amazed at just how fast this thing flies. I purchased this drive to replace a 500GB, 5400rpm drive on a brand new Acer laptop. The bootup time using the OEM hard drive was 1 minute 15 seconds. Replacing w/ SSD reduced it to 20 seconds. (this is for an out-of-the-box Acer Windows 7 Home Premium installation, before I removed the bloatware and installed any of my own programs). I have since installed many programs and also added Truecrypt whole-disk encryption (a cautionary note: this is not recommended for SSDs due to wear concerns, but personally I'm comfortable with the risk), and performance is still excellent, bootup time is still < 25 seconds including loading several startup programs such as Google Desktop, Skype, etc.
続きを読む
3人のお客様がこれが役に立ったと考えています
役に立った
フィードバックを送信中...
フィードバックをお寄せいただきありがとうございます。
申し訳ありませんが、お客様の投票の記録に失敗しました。もう一度試してください。
違反を報告
レビュー を日本語に翻訳する

Kuk
5つ星のうち5.0 The best SSD of its gen
2011年4月14日にアメリカ合衆国でレビュー済み
Amazonで購入
This is my second X25m, had a 160gb before, the main reason for going for that was 80gb wasnt enough on release, later intel released their X25m 120gb, which had the best price/performance of their X25m line.

Overall no issues, still as fast as my past ssd, with very good reads, the weak point of this ssd is writes which are around 110 mg/s, not as fast as today 3 gen of ssds (vertex3, crucial c300/c400, intel 510, etc), but for me the most important aspect in any pc component its that its reliable and stable. The X25m has been perfect more than a year for me, so its record in most mayor retailers, all manufacturers are moving to 25nm nad to make it cheaper, some are publishing the 34nm nad will last longer, other that they have better algorithms and firmware to make 25nm nad as reliable, but nothing is certain as the new drives still have to prove themselves to the market, so out of this alone, for someone that values more reliability over speed, my suggestion is go with this drive.
続きを読む
1人のお客様がこれが役に立ったと考えています
役に立った
フィードバックを送信中...
フィードバックをお寄せいただきありがとうございます。
申し訳ありませんが、お客様の投票の記録に失敗しました。もう一度試してください。
違反を報告
レビュー を日本語に翻訳する
すべてのレビューを参照します
Amazonプライム会員ならお急ぎ便、日時指定便が使い放題
さらに、映画もTV番組も見放題。200万曲が聴き放題 。クラウドに好きなだけ写真も保存可能。
> プライムを無料で試す