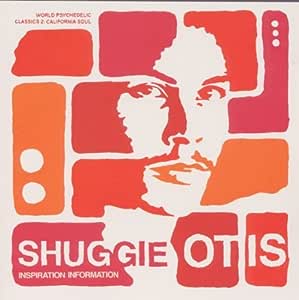 Inspiration Information, the brainchild of guitar prodigy Shuggie Otis, more than justifies the cult following garnered in the years since its (largely ignored) 1974 release. Son of R&B legend Johnny Otis, Shuggie was a late-'60s celebrity due to his Super Session duets with Al Kooper. Opting out of arena rock -- he reputedly refused an offer to join the Rolling Stones -- the 19-year-old Otis spent three years in the studio generating this one-man opus. His multitracked rhythms recall the laid-back funk of the Meters embroidered with psychedelic filigree, and his voice resembles Allan Toussaint's. But in every other regard, this is singular, sexy music, dislocated in time. Drum machines propel "Island Letter" and the beat-box-plus-organ stabs of "XL-30" predate England's Young Marble Giants by several years. Also featured are four bonus cuts from the artist's 1971 set Freedom Flight, including "Strawberry Letter 23," which was later a hit for the Brothers Johnson. Heard here in its original form (with a surprise prog-guitar coda), the song conveys the impression of "Good Vibrations" being played by a lone musician. Unbelievably wonderful. - Billboard

Like Stevie Wonder and Allen Toussaint before him--and Prince and D'Angelo afterward--Shuggie Otis was a musical visionary whose early 1970s recordings showed he could do it all, writing, arranging, performing, and producing some of the decade's most satisfying, innovative, and, unfortunately, overlooked music. This reissue of his 1974 Inspiration Information album--a soulful song cycle that took three years to create and was worth every minute--ranges from early drum machine-driven experiments like "Xl-30" and "Aht Uh Mi Hed" (note the Sly Stone spelling influence) to Otis's most stunning pop confection ever, "Strawberry Letter 23." (The latter song, which ended up being a big hit for the Brothers Johnson, is one of four bonus tracks taken from Otis's 1971 Freedom Flight album). Otis, who once turned down an offer to replace Mick Taylor in the Rolling Stones, continues to perform around the Bay Area on his own and with his father, bandleader Johnny Otis. Hopefully, the long-awaited resurrection of this material will help bring him the attention he deserves. --Bill Forman