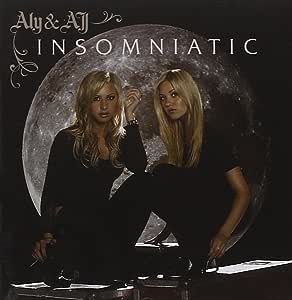 Teen titans Aly & AJ don't sound like Heart, the powerhouse sister act whose hall-of-famer footsteps they hope to follow in, but it doesn't feel like an exaggeration to say they have as much talent. With their flowing blond hair, cool clothes, and gift for hitting the hype machine at just the right fame-boosting angles, they could easily carve out a career on somebody else's lyrics and a lame-o delivery. But the sisters Michalka have a lot more integrity than that: If Insomniatic, goes to show the pop-buying world anything, it's that not all youth-targeted acts deserve their featherweight reputations. The title track rocks hard, "Bullseye" borrows a Replacements vibe, and opener "Potential Breakup Song" pumps in pleasingly synth-y rhythms and sweet-heat attitude. Slighter tracks, including "Silence" and "I'm Here," showcase a sympathetic ear for teenage romantic tribulations, but overall Insomniatic is not for the drowsy--Aly & AJ are doing musical No-Doz for a new generation, and they're doing it right. I>--Tammy La Gorce

Matt182
5つ星のうち5.0 Fantasy world and Disney girls
2008年10月22日に英国でレビュー済み
Amazonで購入
The first time that I discovered the blond duo was on Flashbox on The Hits. Someone had requested Potential breakup song, and I was immediately captivated by the song. The lyrics, the music and the aura that these girls were venting was amazing. I didn't know back then just how much of a great experience it was to discover them, in all their glory. By the time I had heard the song a couple of times I just had to own the song, so I looked on Amazon for their latest album, which featured this song on it and the rest is history. I figured that if this song was this good then the rest of the album must be pretty darn good too. I was absolutely right. I wasn't expecting too much from the album and the main reason I bought it was for Potential breakup song.
I have to note that I chose to purchase the US version because it has a much better cover and I saw it featured another track, which is Blush. Do not be fooled by this though because Blush is not included on the album (or at least not on my copy!).
If a cynic or a critic looked at these blond teenagers, who were launched by the Disney channel, it would be pretty easy to judge them and guess what kind of music they would write. The fact that they write their own music at all would and I'm sure it has, surprised critics and delight them at the same time. I love that though because they do surprise the ignorant people so much in terms of talent. Compared with bands who wrote music at a later age you can see just how talented these girls are. For instance, Good Charlotte's debut album has nothing on this and they were at least a few years older and more experienced. At the time that this album was written Aly was 18 and AJ was 16, and for 16 and 18 year olds they are incredibly impressive. They obviously have huge talent, God bless them.

The first time that I listened to the album I wasn't impressed. None of the songs other than Potential breakup songs really stood out. However, the day after I listened again and I was enthralled. The more I listen to this album the more I appreciate it and the better it gets; in terms of song writing, musicians and musicality. The more I get to know the girls, the more I feel grateful to have found them, and this album especially. I don't really care how they've charted in the US or that they have little popularity in the UK. Their music and their talent, not just in music but also in acting, is clear for anyone to see. Aly and AJ don't get the credit they deserve, especially in America. Anyone who rates Miley Cyrus above these doesn't appreciate music.

The guitarist work on this whole album, in every track is awesome. As a guitarist myself I can really appreciate all of the elements that are inserted into every track. The effects and feeling is just great and I can't fault any of it, only praise it. The guitars are played by a guy called Tim Pierce on all songs and he is a great guitarist. Paul Bushnell plays bass and he does a fantastic job as well.
The girls had more room to experiment with this album and the record label were generous enough to let this happen, with a very positive result. The production is fantastic and it has helped the girls have that ambience that occurs in every song. Every piece of musician work is amazing and that includes drumming and keyboards. Aly shows her great talent on the live piano featured on I'm here, which is a beautiful song and a beautiful piece. She plays rhodes on the beautiful Silence and does an impressive and sophisticated job. I was surprised when I discovered that she had played these instruments but I appreciated the songs even more. Aly and AJ are both great singers and their vocals are strong and vivid, but especially Aly who has the stronger voice. She has to be the best of her generation in pop music, especially for this genre. She must be somewhere alongside Jordin Sparks, if the types of music is compared. .

The album is a mix of different and varied elements. There are driving pop songs with a rock edge and then there are softer and melodic songs, but they all maintain that pop sound.
Potential breakup song is one of the strongest on the album and is a great kick-start in terms of the feeling of the album. Bullseye is another driving pop song with great humour. Closure is the surprise on the album where the sound is smarter and the melodies and lyrics are intelligent and sophisticated. Divison has a great softer sound. Like it or leave it, which is my personal favourite has the most rock sound next to If I could have you back. The chorus is quick and the lyrics are clever with 'I'm worth all the crap that I'm putting you through'. Like Whoa sounds similar to Bullseye and goes back to the driving pop sound. Insomniatic is a strong and impressive title track. The fact that they have defined a new word is cool enough but the song itself sounds great. Silence is a beautiful song with soft melodies. Aly's voice is perfect and compliments the melody, as well as her great musician work. Flattery is a softer song, which has a great sound. I'm here is the other softest on the album with fantastic musician work and a brilliant way to finish the album. The final song is a remix of Chemicals react. It fits in well with the feeling of the album and is smooth and beautiful in the verse with a rock edge in the chorus.
続きを読む
1人のお客様がこれが役に立ったと考えています
違反を報告
レビュー を日本語に翻訳する

Shopper
5つ星のうち5.0 One of my favourite albums.
2012年11月1日に英国でレビュー済み
Amazonで購入
So they may not be as 'well-known' as a lot of other female artists out there at the moment.
So they may be 'Disney' Stars.
So what? This album is in my top favourites, and I own a lot of music albums!
Catchy, infectious, pop-rock tunes to blare out your CD player, what more could you want?!
続きを読む
1人のお客様がこれが役に立ったと考えています
違反を報告
レビュー を日本語に翻訳する

Bob C
5つ星のうち5.0 Insomniatic
2011年1月6日に英国でレビュー済み
Amazonで購入
Great album - lively, girly pop music from a talented duo. If I need my spirits to be lifted, I often choose to play this album. In my opinion it is their best but that is a matter of personal choice. Find space on your shelves for this album and you won't be disappointed.
続きを読む
1人のお客様がこれが役に立ったと考えています
違反を報告
レビュー を日本語に翻訳する