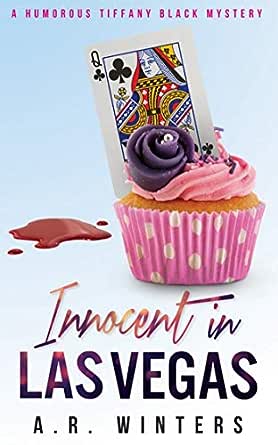 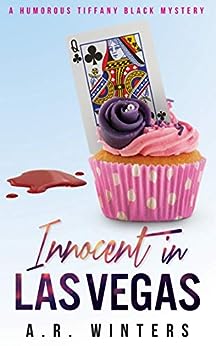 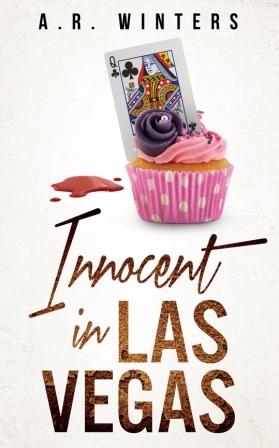 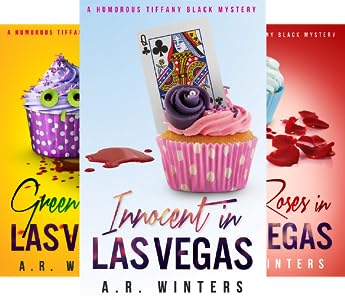 "I tell myself every day that I don't hate my job... But there's a reason I'm trying to leave the madness of the casino pit to become a Private Investigator."

"Winters will have you giggling into your book!"

Cupcake-loving croupier Tiffany Black is determined to leave her job at the casino for good. She's one small step away from acquiring her Private Investigator license, and has her eye on the prize.

Accepting her first real case - investigating the murder of casino-mogul Ethan Becker - should be exciting. Instead, things spiral out of control and Tiffany finds herself in over her head, as she confronts secretive suspects, corrupt casino henchmen and a bodyguard with a mysterious past.

Tiffany's poker-hustling Nanna and pushy parents want her to find a nice man and settle down, but Tiffany just wants to track down the real murderer before he finds her first...

"You fall in love with Tiffany Black from the start, and the mystery starts immediately" - Melissa Greenberg, Amazon.com Top 1000 Reviewer

"The perfect balance of being lighthearted, but still a serious page-turning mystery." - Jaycie D, Amazon.com

talkinturtles
5つ星のうち1.0 poorly written
2018年7月10日 - (Amazon.com)
Amazonで購入
i honestly don't understand all the good reviews. i could barely force myself to finish reading the book. no suspense, no thrill rides. i found myself rooting for the murderer. this was so unbelievable that girl with no experience, no intelligence, no knowledge of p.i. work would be able to even come close to getting a license. it's not just something you wake up and decide to do. she did not know how to handle any situations. the writing was very juvenile . i can't believe this is a series. just kill the poor girl off and be done with it.
続きを読む
17人のお客様がこれが役に立ったと考えています
レビュー を日本語に翻訳する

readergonnaread
5つ星のうち2.0 complete knock off of stephanie plum just not as funny or as well written.
2014年7月22日 - (Amazon.com)
Amazonで購入
lots of readers are comparing this series to stephanie plum (janet evonovich # series) and some are comparing it to kinsey milhone (sue grafton alphabet series) but are still giving this 4 and 5 stars?!

i have read every stephanie plum book and every kinsey milhone book and yes this book is not only VERY SIMILAR it is pretty much and complete rip off and knock off of them. just not as funny and not as interesting.

knock off of stephanie plum: stephanie is a bounty hunter that hates guns but loves donuts and is in a love triangle between a cop and a private security guy that has mysterious special forces background, owns a security company, lives on the top floor of his security company, drives expensive cars, doesnt talk much, etc etc. Stone is a COMPLETE RIP OFF of Ranger in the stephanie plum novels. Tiffany Black is a complete rip off of Stephanie Plum with an overbearing mother, a silly grandma that lives with her parents, dinners at their house, obsessed with sweets, hates guns, etc. and then throw in a little kinsey milhone with the lovable old baker neighbor JUST like kinsey's Henry.

if you want to read humorous mysteries go for the originals not this knock off.

I did notice several grammatical errors throughout the story, but thankfully, they weren't that distracting to the story itself. Although there was one error that was repeatedly used that somewhat annoyed me. For whatever reason, the author would say "no one" as "no-one." I have no clue why she thought a dash/hyphen was needed between these words. Overall, this was a cute story, and I'd have to say that my favorite character was Nanna, she was a hilarious old lady.

I didn't get why Tiffany thought her name sounded like a stripper name? An '80s valley girl? Yes.

There's a part when Tiffany is reminiscing about her Nanna. She ends up thinking about how "...she moved here a few years ago to live with her daughter...," wouldn't that have been Tiffany's mother? Just a strange way to phrase it.

Tiffany ends up stabbing "Mr. Beard" in the neck with her stiletto heel: "It went through his flesh...Blood gushed out..." Why did she never consider that she may have killed him? Why did she never report it to the police?

Stone is explaining to Tiffany how she can lose someone if she's being tailed. He starts off by saying that there might be a car ahead of her (who's watching her direction), as well as one OR two cars behind her. Obviously, he simplifies his directions. "So take a turn to throw off the car ahead..." (why would someone be ahead when the person being tailed could easily turn a different direction)? "...then lose the CARS behind you in local streets..." (because that's easy to do), "...then get back on the expressway...By the time you do this, you'll only have one car on your tail." How would she have one car if she lost them in the local streets?

Females are always expected to settle down, get married and have lots of babies, as is the case with Tiffany. Nothing surprising there. Yet, when she takes Stone to her parents' house for dinner, instead of saying he was a good friend, why didn't she say he was something like a coworker? She knew her family's thoughts on her finding a guy. That whole situation was a bit much because she could have easily made it nonexistent had she used her brain.

For dessert, her mother made chocolate lava cake (is that all Tiffany eats? Cakes?) Anyways, Tiffany thinks how "she couldn't possibly stuff any more cake into my stomach," how big was her lava cake? Those are usually pretty small.

When did Mcdonald's ever serve slices of apple pie?

"I did feel a bit naive, but how was I supposed to know which interviews a CEO deems worthy of his time?" Well considering she's been working in the casinos for a good while, you'd think she would have known this already or at least a general idea. Why would a CEO, in general, interview a dealer (someone that every casino has multiples of)?

When Tiffany is fighting with Vanessa, it's described as Tiffany being on top. "I felt her kick me and try to push me off." So, obviously, Vanessa's legs aren't flat on the ground/more like they're bunched up in front of her, and Tiffany's body is on top of them. "...she kneed me in the stomach..." How would that have been possible? Whether her legs were flat on the ground, she couldn't have kneed Tiffany in the stomach, or if they were bunched in front of her (her legs would be bent), I still don't see how that would have been possible.

I never understood why Sophia had hired Tiffany in the first place when Stone was right there, and obviously she and Stone were still on good terms.

As someone mentioned in their review, this story did make me think of Janet Evanovich's Stephanie Plum series.

loves to read
5つ星のうち1.0 Waste of time.
2016年4月17日 - (Amazon.com)
Amazonで購入
Good Thing u it was free. Or I could also a waste of money. Stupid and inane. Totally unbelievable. How could someone being chased to be killed, stumble into an elderly man's apartment and sit down and snarf cupcakes before calling for help? Dumb.
続きを読む
19人のお客様がこれが役に立ったと考えています
レビュー を日本語に翻訳する

Kindle Customer
5つ星のうち5.0 A great mystery! Comfort Reading At Its Best
2013年9月9日 - (Amazon.com)
Amazonで購入
This is the first book by A.R. Winters that I got. I wouldn't call it a cozy - it's not set in a small town. BUT there's hardly any bad language, and no sex or gore. At times there is action, danger and excitement, but not constantly. What I find comforting, I think, in addition to the mystery element, is the humour. This book has some truly hilarious moments that will make you laugh hard. And the protagonist has a tongue-in-cheek style of talking that will make make you giggle and smile in understanding. There is the glamorous world of the Las Vegas casino a little bit, I enjoyed that. There is no real romance as such, but by the end of the book there is the "potential" for some romance and I expect/hope to see that explored.

I found the "who" part of the "whodunnit" quite surprising. I think it wasn't what I expected, so that also pleasantly surprised me.