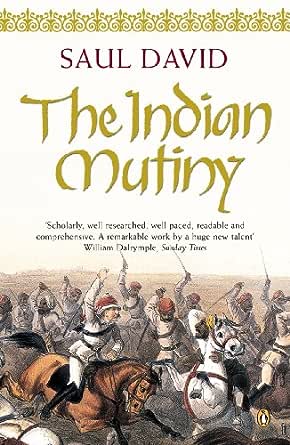 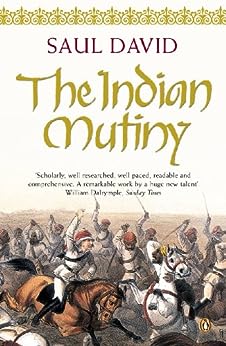 The most compelling and comprehensive history of the Indian Mutiny ever written. --このテキストは、hardcover版に関連付けられています。

Saul David was born in 1966 and educated at Edinburgh University. His is the author of five previous books, including THE HOMICIDAL EARL: THE LIFE OF LORD CARDIGAN and PRINCE OF PLEASURE: THE PRINCE OF WALES AND THE MAKING OF THE REGENCY. Saul David lives in Somerset. --このテキストは、hardcover版に関連付けられています。

Northbank
5つ星のうち2.0 Propaganda, not history. And bogged down with boring detail.
2019年9月11日に英国でレビュー済み
Amazonで購入
Maybe this book should be renamed ' A British Perspective - The Indian Mutiny' as the book relies heavily, bordering on the exclusive, reports from British sources. In India the conflict is called the First War of Independence which is a more appropriate title for the conflict.

David promotes primarily that this Revolt against a foreign force ruling their country, was based on a pay grievances by Indian soldiers employed by the East India Company. And while pay was so low that soldiers were in debt; that most officers were British although in the minority of service personnel and that discrimination was rife, the book fails to give the proper importance to other major resentment.

The British had made laws contrary to Indian custom and religion; had promoted Christianity in an already very religious country; and had made heavy taxes and seized territories via the Doctrine of Lapse. The fact that ordinary people; nobility who had their land taken from them, and rural landlords who were hit with high taxation also joined the Revolt against foreign rule would help to negate the importance of a pay dispute with an employer.

The book is written like nuggets of a Boy's Own account of dashing British bravado to be found within many pages of boredom. Indian atrocities were described in detail where the British policy of No Mercy which included the hanging and slaughter of thousands of innocent men, women and children are skipped over.

The author also fails to answer probably the most important question he himself raises - why did the Revolution fail as the trained Indian armies substantially outnumbered the British armies?

This book is more aligned to propaganda than history. With history we require the perspective of both sides. Personal accounts are crucial as is a good brief on the reasons for the conflict before we get into detail about how it unfolds. David provides the' Motives for Mutiny' as Appendix 3 whereas it should have been Chapter One.

Overall I gave it 2 stars due to the research involved. Pity the author forget to research the Indian perspective.

And yet again we have a historian who has no idea of the difference between British and English.

Amazon Customer
5つ星のうち5.0 Best I have read.
2020年8月24日に英国でレビュー済み
Amazonで購入
What an under taking this must have been. What an incredible effort the author has made with the amount of research that has gone into the writing of this book.
I have read other accounts of the Indian mutiny but this is by far the best.
Very well balanced with both the cause and effect covered.
You certainly get to understand why it happen and realize that the British where very much responsible for the outbreak.
The dreadful slaughter then carried out firstly by the mutineers, and then by the avenging British was truly shocking.
How close the British where to being thrown out of India is something that I certainly didn't realise.
If you want a well balance superbly well written history of the Mutiny, this is it.
続きを読む
2人のお客様がこれが役に立ったと考えています
違反を報告
レビュー を日本語に翻訳する

Andy Casey
5つ星のうち5.0 Andy's review
2019年10月2日に英国でレビュー済み
Amazonで購入
Downloaded this as it is a campaign I know little about. I'm glad I did - learnt facts I never knew, & one could almost feel the heat & hear the battle cries. A thoroughly good book.
続きを読む
3人のお客様がこれが役に立ったと考えています
違反を報告
レビュー を日本語に翻訳する