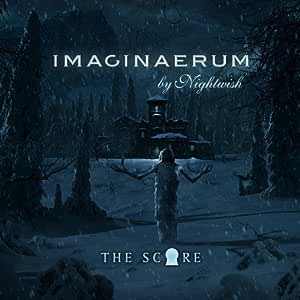 The official soundtrack of the movie “Imaginaerum - The Score”. The album features 13 grandiose, unreleased re-interpretations of Imaginaerum tracks by Petri Alanko.

RW in Darkest
5つ星のうち4.0 Score from a movie - well played and atmospheric
2015年6月22日に英国でレビュー済み
Amazonで購入
I was a bit disappointed that this isn't really Nightwish as I know them, but really a music 'score' from a movie that alas isn't in the mainstream. I should have read the blurb more closely before I bought it. Well played of course as are all their work, and a must for the die-hard collector, but sadly missed the point for me a bit.
続きを読む
役に立った
フィードバックを送信中...
フィードバックをお寄せいただきありがとうございます。
申し訳ありませんが、お客様の投票の記録に失敗しました。もう一度試してください。
違反を報告
レビュー を日本語に翻訳する

Mike Watkinson
5つ星のうち2.0 Trust me to get the wrong one...
2012年12月25日に英国でレビュー済み
Amazonで購入
Confusion reigned, because Amazon made rather a mess of things. There are, apparently, TWO Imaginaerum albums! One is a regular NW album; this is an orchestral score for the accompanying film. Reviews got mixed up, people got confused, and I'm re-writing this, because it got attached to the the wrong album to start with... Unlike many, I am not a long term fan of Nightwish, if only because I only found them relatively recently (on YouTube). I'd only acquired one album thus far, Dark Passion Play. I've seen a little of the controversy over the change of singer. I like Annette The New (not new to me, of course, rather the only one I know!), probably more than the few scraps of Tarja The Former I've heard. Of course, Annette is now also The Former. Still, I like DPP a lot. So for my second album, I bought the new one.

Silly me, not realising there were two totally different versions, I managed to get the wrong one! Essentially, this isn't Nightwish, it's an orchestral score created by rock musicians as a film sound track (the band is claiming credit for the arrangements on the the sleeve notes), which is a completely different beast. It's effectively a Nightwish album without Nightwish on it. Take the first 90s of The Poet & The Pendulum and extend it the length of an album, or take the whole of P&P and strip the guitars & voice out. You'll then have a very good idea of how the album sounds.

That doesn't make it a bad album; it's pleasant enough listening. I'll also credit the fact that is isn't computer-generated, which was my first thought on hearing it. The orchestral instruments are played by orchestras, the voices are real choirs. But it's not Classical music. As Paul McCartney found out, simply scoring the same music you always write for an orchestra doesn't turn it into classical music. I've studied Classical composition & written for my own pleasure, so I know of what I speak! It isn't rock music; the guitars & Annette are almost entirely missing. It's a film soundtrack, but I don't have the film; know nothing of it. I don't doubt that the soundtrack adds to the film, in the way that soundtracks always do, and Nightwish, let's face it, are super musicians.

But as an album on its own; in isolation? A lot of people love the album I thought I was buying; this isn't it. The most telling judgement I can make on it is that few, if any, of the tracks will make it on to the iPod for those long drives into the office. If we had a 10 scale, I'd give it 5; here I can only give it 2. If you don't already have it, you may well love it, but I do suggest you try to catch some of it before buying, as I did not. If I had, I suspect I would have bought one of the older albums to extend my repertoire instead. Or possibly realised there was another version, which I'll now have to add back on to the Wish List. Ho hum!
続きを読む
7人のお客様がこれが役に立ったと考えています
役に立った
フィードバックを送信中...
フィードバックをお寄せいただきありがとうございます。
申し訳ありませんが、お客様の投票の記録に失敗しました。もう一度試してください。
違反を報告
レビュー を日本語に翻訳する

Scott Neily
5つ星のうち5.0 Great score album!
2013年2月13日にカナダでレビュー済み
Amazonで購入
This album is a lot more than a mere orchestral version of Imaginaerum - it take the themes from the songs, enhances them instrumentally for the visual medium, and throws in a lot of new, similar material. Its a great film score, and fans of the band's orchestral, instrumental works will find this appealing.
続きを読む
役に立った
フィードバックを送信中...
フィードバックをお寄せいただきありがとうございます。
申し訳ありませんが、お客様の投票の記録に失敗しました。もう一度試してください。
違反を報告
レビュー を日本語に翻訳する

Rebekah Seagle
5つ星のうち5.0 A beautiful companion for any Nightwish fan
2013年1月19日にカナダでレビュー済み
Amazonで購入
This is pure instrumental and a perfect addition to any Nightwish fan's collection. It takes everything that was wonderful about the vocal Imaginaerum album and condenses the best for the upcoming film's soundtrack. Yes, this is the OST for a upcoming film. Cannot wait!
For people who are not already fans, check it out. The music is powerful enough to stand on its own. For those who are already fans, this is still a must have!
続きを読む
役に立った
フィードバックを送信中...
フィードバックをお寄せいただきありがとうございます。
申し訳ありませんが、お客様の投票の記録に失敗しました。もう一度試してください。
違反を報告
レビュー を日本語に翻訳する

L. Hubbard
5つ星のうち5.0 Imaginaerum (The Score) is a sensational album that expands on the themes of Imaginaerum using instrumental/orchestral aspects
2012年11月14日に英国でレビュー済み
Amazonで購入
Please be aware at the outset of this review that I am commenting on Imaginaerum (The Score), and not Imaginaerum(1CD version) or Imaginaerum (2 CD Version). The Amazon reviews seem to have merged across products, even though there are important differences between these releases. I'll comment briefly on these so any confusion can be avoided. The 1 CD version contains the album Imaginaerum, where the tracks contain vocals. The 2 CD version comes with an additional CD, which contains the instrumental version of the tracks only. Imaginaerum (The Score) (the CD under review) is a largely instrumental CD with expanded orchestral versions of all the themes you will of heard on the previous Imaginaerum releases. I thought this was a phenomenal release. That said, I listen to a lot of film/tv soundtracks and scores, where the instrumental/orchestral sound is something that I love. I know that will not be the case for all Nightwish listeners, and thus this release should be considered something of a niche album, because it will not conform to the typical "Nightwish" sound.

There are 13 tracks on this album lasting just short of 54 minutes. I won't go into every track in detail, because I would imagine that people getting this release will probably have encountered many of the melodies as heard in the previous Imaginearum release. So the question needs to be asked, what does this release contain that is above and beyond what you have heard before? This Score CD uses many of the established themes and melodies found in Imaginearum, and like CD2, the majority is instrumental - purely vocal tracks (and a rock sound) is not in abundance. For those interested, the main vocal track is "Deeper Down" (Track 9) that I assume contains vocals from the usual Nightwish band members. So with this in mind, this score CD is mainly for those who would like an orchestral/instrumental extenstion of the themes introduced in Imaginaerum. However, this CD is better (in my opinion) for the instrumental side of things because it is not simply the songs minus the vocals. This is a completely new expansion on the themes introduced previously, that makes for a great listening experience when listening to the whole album - it flows spectacularly well. If you like the Nightwish vocals, but are not interested in the instrumental sections from Imaginaerum, this is not the album for you.

Regarding the sound quality, the album is generally mixed exceptionally well. All the orchestral elements sound wonderful, and the vocal/choral aspects sound great. My only criticism comes from the final track, "From G to E Minor", where the piano is mixed particularly poorly in portions and creates a bit of distortion and sounds fairly poor. This criticism cannot be said for the majority of the album though.

Overall, I thought this was an outstanding album. For the record, I am not a regular listener of Nightwish as a band, I prefer more soundtrack style music, where for me, the instrumental side of things is vastly more attractive. For fans who like the more rock side of Nightwish, the score album for Imaginaerum might deviate too much from the norm of what you would expect from the band. If, however, you liked the themes and melodies as heard on the original Imaginaerum album, particularly the instrumentals on CD2, you will love this release. If vocal tracks are your thing, this release is very light in terms of actual songs. Nonetheless, I loved how they expanded and reinterpreted the "themes" they had written previously and is a very strong instrumental album. I hope both fans of Nightwish and others who are less familiar with their work give this score release a chance. For this genre of music, I found it to be exceptionally refreshing and recommend it highly.
続きを読む
6人のお客様がこれが役に立ったと考えています
役に立った
フィードバックを送信中...
フィードバックをお寄せいただきありがとうございます。
申し訳ありませんが、お客様の投票の記録に失敗しました。もう一度試してください。
違反を報告
レビュー を日本語に翻訳する

Mr. H
5つ星のうち2.0 The end of more than an era
2012年11月30日に英国でレビュー済み
Amazonで購入
No-one was more surprised than me when "Imaginaerum" turned out to be the best album of Noghtwish's career to date. I was disappointed with "Dark Passion Play", and thought there days were numbered. But with replacement vocalist Anette Olzon finding her feet, everything fell into place. So when I heard that Tuomas Holopainen had introduced the idea for an Imaginaerum movie I was fair excited. Even more so when the they decided that instead of a collection of separate music videos they should create a full movie with a bigger story, it got even better. And then they fired Anette Olzon. And then they released this soundtrack album.

Now, don't get me wrong. If your idea of a Nightwish soundtrack was bombastic and pomptastic, then you might love this. But it just doesn't work. For sure, the orchestrations and arrangements by the redoubtable Pip Williams are excellent, but these reinterpretations by Petri Alanko only serve to make too much of it come across as a Nightwish karaoke disc. If they'd gone the whole hog and started from scratch, they might have ended up with something worthwhile but far too often they head off into the world of Middle Eastern motifs, a sure sign of musical writers block in the world of goth metal, and the recurring motifs themselves just aren't strong enough to carry a soundtrack. It's definitely more "Season Of The Witch" than "Lord Of The Rings", and too many of the tunes have role playing game soundtrack written all over them.

When a vocal finally arrives on 'Deeper Down', I let out a palpable sigh of relief, even if it just a reworked 'The Crow, the Owl and the Dove'. Nightwish got lucky when they replaced Tarja Turunen with Anette Olzon, and it's sad to say, but if Floor Jansen does get the vocalist gig permanently, there is every indication that Nightwish will turn into another generic goth metal band with a competent yet equally generic vocalist. The best thing to do would be to lay the Nightwish name to rest, but with a lot of money tied up in this, I suspect that, regardless of artistic desires, the machine will trundle on in contractual obligation style. It all probably works a lot better within the confines of the film, and you can see a trailer below, but as a standalone release, it's a fail.
続きを読む
5人のお客様がこれが役に立ったと考えています
役に立った
フィードバックを送信中...
フィードバックをお寄せいただきありがとうございます。
申し訳ありませんが、お客様の投票の記録に失敗しました。もう一度試してください。
違反を報告
レビュー を日本語に翻訳する

Alan A
5つ星のうち4.0 Nice to listen to in the car
2013年1月1日に英国でレビュー済み
Amazonで購入
Although in comparison I think I prefer the orchestral version of Imaginaerum, The relaxed music of The Score is still nice to listen to, especially in the car.
続きを読む
役に立った
フィードバックを送信中...
フィードバックをお寄せいただきありがとうございます。
申し訳ありませんが、お客様の投票の記録に失敗しました。もう一度試してください。
違反を報告
レビュー を日本語に翻訳する