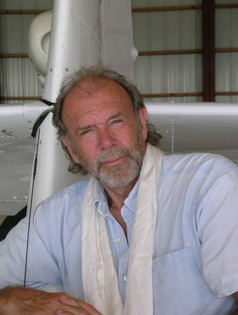 It was toward the middle of the summer that I met Donald Shimoda. In four years’ flying, I had never found another pilot in the line of work I do: flying with the wind from town to town, selling rides in an old biplane, three dollars for ten minutes in the air.

But one day just north of Ferris, Illinois, I looked down from the cockpit of my Fleet and there was an old Travel Air 4000, gold and white, landed pretty as you please in the lemon-emerald hay.

Mine’s a free life, but it does get lonely, sometimes. I saw the biplane there, thought about it for a few seconds, and decided it would be no harm to drop in. Throttle back to idle, a full-rudder slip, and the Fleet and I fell sideways toward the ground. Wind in the flying wires, that gentle good sound, the slow pok-pok of the old engine loafing its propeller around. Goggles up to better watch the landing. Cornstalks a green-leaf jungle swishing close below, flicker of a fence and then just-cut hay as far as I could see. Stick and rudder out of the slip, a nice little round-out above the land, hay brushing the tires, then the familiar calm crashing rattle of hard ground under-wheel, slowing, slowing and now a quick burst of noise and power to taxi beside the other plane and stop. Throttle back, switch off, the soft clack-clack of the propeller spinning down to stop in the total quiet of July.

The pilot of the Travel Air sat in the hay, his back against the left wheel of his airplane, and he watched me.

For half a minute I watched him, too, looking at the mystery of his calm. I wouldn’t have been so cool just to sit there and watch another plane land in a field with me and park ten yards away. I nodded, liking him without knowing why.

“You looked lonely,” I said across the distance between us.

I pulled off my helmet and goggles, climbed out of the cockpit and stepped to the ground. This feels good, when you’ve been a couple hours in the Fleet.

“Hope you don’t mind ham and cheese,” he said. “Ham and cheese and maybe an ant.” No handshake, no introduction of any kind.

He was not a large man. Hair to his shoulders, blacker than the rubber of the tire he leaned against. Eyes dark as hawk’s eyes, the kind I like in a friend, and in anyone else make me uncomfortable indeed. He could have been a karate master on his way to some quietly violent demonstration.

I accepted the sandwich and a thermos cup of water. “Who are you, anyway?” I said. “Years, I’ve been hopping rides, never seen another barnstormer out in the fields.”

“Not much else I’m fit to do,” he said, happily enough. “A little mechanicking, welding, roughneck a bit, skinning Cats; I stay in one place too long, I get problems. So I made the airplane and now I’m in the barnstorming business.”

“What kind of Cat?” I’ve been mad for diesel tractors since I was a kid.

“D-Nines! Big as a house! Double compound low gear, can they really push a mountain?”

“There are better ways of moving mountains,” he said with a smile that lasted for maybe a tenth of a second.

I leaned for a minute against the lower wing of his plane, watching him. A trick of the light … it was hard to look at the man closely. As if there were a light around his head, fading the background a faint, misty silver.

“Something wrong?” he asked.

“What kind of problems did you have?”

“Oh, nothing much. I just like to keep moving these days, same as you.”

I took my sandwich and walked around his plane. It was a 1928 or 1929 machine, and it was completely unscratched. Factories don’t make airplanes as new as his was, parked there in the hay. Twenty coats of hand-rubbed butyrate dope, at least, paint like a mirror pulled tight over the wooden ribs of the thing. Don, in old-English gold leaf under the rim of his cockpit, and the registration on the map case said, D. W. Shimoda. The instruments were new out of the box, original 1928 flight instruments. Varnished-oak control stick and rudder-bar; throttle, mixture, spark advance at the left. You never see spark advances anymore, even on the best-restored antiques. No scratch anywhere, not a patch on the fabric, not a single streak of engine oil from the cowling. Not a blade of straw on the floor of the cockpit, as though his machine hadn’t flown at all, but instead had materialized on the spot through some time-warp across half a century. I felt an odd creepy cold on my neck.

“How long you been hopping passengers?” I called across the plane to him.

He was lying. Five weeks in the fields and I don’t care who you are, you’ve got dirt and oil on the plane and there’s straw on the cockpit floor, no matter what. But this machine … no oil on the windshield, no flying-hay stains on the leading edges of wings and tail, no bugs smashed on the propeller. That is not possible for an airplane flying through an Illinois summer. I studied the Travel Air another five minutes, and then I went back and sat down in the hay under the wing, facing the pilot. I wasn’t afraid, I still liked the guy, but something was wrong.

“Why are you not telling me the truth?”

“I have told you the truth, Richard,” he said. The name is painted on my airplane, too.

“A person does not hop passengers for a month in a Travel Air without getting a little oil on the plane, my friend, a little dust? One patch in the fabric? Hay, for God’s sake, on the floor?”

He smiled calmly at me. “There are some things you do not know.”

In that moment he was a strange other-planet person. I believed what he said, but I had no way of explaining his jewel airplane parked out in the summer hayfield.

“This is true. But some day I’ll know them all. And then you can have my airplane, Donald, because I won’t need it to fly.”

He looked at me with interest, and raised his black eyebrows. “Oh? Tell me.”

I was delighted. Someone wanted to hear my theory!

“People couldn’t fly for a long time, I don’t think, because they didn’t think it was possible, so of course they didn’t learn the first little principle of aerodynamics. I want to believe that there’s another principle somewhere: we don’t need airplanes to fly, or move through walls, or get to planets. We can learn how to do that without machines anywhere. If we want to.”

He half-smiled, seriously, and nodded his head one time. “And you think that you will learn what you wish to learn by hopping three-dollar rides out of hayfields.”

“The only learning that’s mattered is what I got on my own, doing what I want to do. There isn’t, but if there were a soul on earth who could teach me more of what I want to know than my airplane can, and the sky, I’d be off right now to find him. Or her.”

The dark eyes looked at me level. “Don’t you believe you’re guided, if you really want to learn this thing?”

“I’m guided, yes. Isn’t everyone? I’ve always felt something kind of watching over me, sort of.”

“And you think you’ll be led to a teacher who can help you.”

“If the teacher doesn’t happen to be me, yes.”

“Maybe that’s the way it happens,” he said.

Richard Bach is the author of Stranger to the Ground, Biplane, Nothing by Chance, Jonathan Livingston Seagull, A Gift of Wings, Illusions, There's No Such Place as Far Away, The Bridge Across Forever, One, and Running from Safety.

An Amazon Customer
5つ星のうち5.0 I can't quite put it into words to be honest.
2018年1月6日に英国でレビュー済み
Amazonで購入
This book was first given to me about 15 years ago. I literally read it one night, then read it again.

There are few things in my life I would describe as "Life changing", but this would definitely be one of them.

Given my time and experience with this book it's impossible for me to leave a complete review.

I will say that through the years I've come across quite a few people at different points in their lives and I've given them my copy of the book, and then bought another one straight afterwards. My only regret is that I've not held onto the copy that was given to me at the time as I should have treasured it for what it was (I do however know where that copy is currently living and I'm happy in that knowledge).

Everyone should read this book at least once.

Maria
5つ星のうち5.0 Fabulous, heart lifting!
2017年8月17日に英国でレビュー済み
Amazonで購入
I was led to this book when I put headphones on and a YouTube video of Jerry and Esther Hicks part 3 was being played through my phone, though I didn't actually put it on. Jerry Hicks is a magnificent being, his last physical life was the most interesting I have heard ever. I loved his words and honesty. I also could see his great love for Esther. He read this whole book to Esther via phone so I had to read what it says. I finished it in a couple of hours and feel exhilarated .

Kevin E. Brown
5つ星のうち5.0 Finally a copy that does not get lent and lost
2017年7月26日に英国でレビュー済み
Amazonで購入
I eas lent a copy of this many years ago. I've read it many times since. The lender told me to lend it to someone else whe I had finished it. Every time I need to remind myself I buy another copy anf it gets lent out. Don't fret. I bought another hard copy that already has a new owner on the way. This book will either do something for your soul or not. Your choice.
続きを読む
6人のお客様がこれが役に立ったと考えています
違反を報告
レビュー を日本語に翻訳する

flying coffin
5つ星のうち5.0 The 'Is' have it and often lose it
2015年9月13日に英国でレビュー済み
Amazonで購入
The sort of short story that gets your thought process' buzzing. Have read it once and will read it again soon as the messages printed on the pages play around in my head and explain and/or propose life as we see it, not as it actually is......if that makes sense?

Take the idea that you can fly a propeller driven aeroplane that requires little if any fuel ever, can dodge the flies and bugs as it skims over the fields and attracts fee paying passengers, believers and non believers...believing in what you have to resolve in your head.

mark
5つ星のうち5.0 Mind expanding
2015年10月13日に英国でレビュー済み
Amazonで購入
Richard Bach is an author intent on expanding the minds of his readers. He does it using adventure and personal experience and takes his readers on fascinating journeys. He does so with a mindset best suited, I found, for teenagers or young adults. I read him extensively from "Jonathan Livingstone Seagull" when I was a teenager, to "Illusions" and "Bridge across Forever" etc in my late twenties when I was 'Seeking' answers. That was 25yrs ago. I have bought this copy for the son of a friend who is now of that age. Recommended 10*/10. Hope this helps?
続きを読む
6人のお客様がこれが役に立ったと考えています
違反を報告
レビュー を日本語に翻訳する
すべてのレビューを参照します
トップへ戻る
Amazonについて
Amazonでビジネス
Amazonでのお支払い
ヘルプ＆ガイド
日本語ショッピングのための言語を選択します。 日本ショッピングのための国/地域を選択します。
© 1996-2020, Amazon.com, Inc. or its affiliates