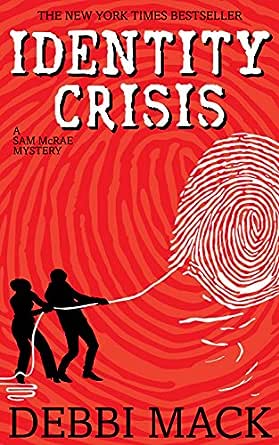 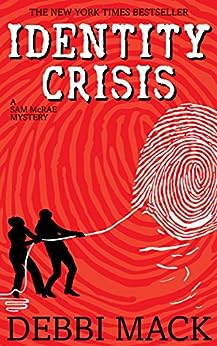 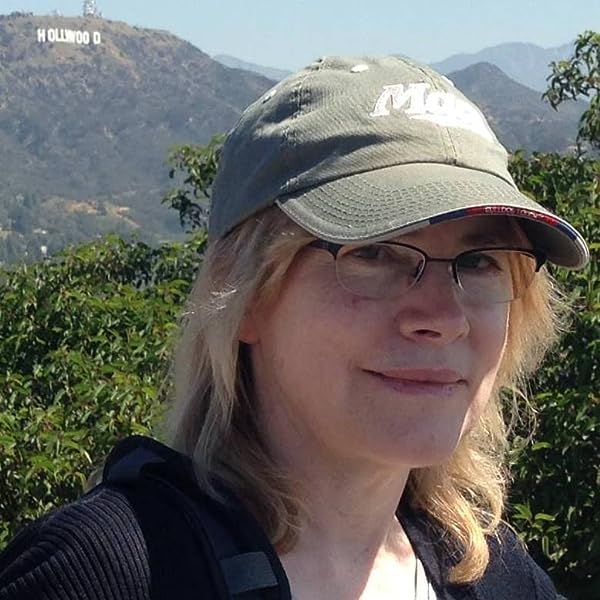 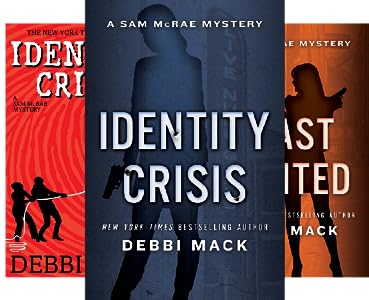 "Identity Crisis grips you from the first page. Sam is a likeable heroine--smart, feisty and determined."

"This is a story with plenty of action, a well-drawn plot and a set of interesting characters ... a fun read."

"Debbi Mack has created a first-rate heroine in Sam McRae. Sam is tough, resilient, sassy and unstoppable. Good thing, too, as Identity Crisis moves at a slam-bam pace."

--Simon Wood, author of Saving Grace and The One That Got Away

"Of suspense, Alfred Hitchcock once said, 'There is no terror in the bang, only in the anticipation of it.' Author Debbi Mack nails that statement in this tightly written tale about a flawed Maryland attorney, 'Sam' McRae ... a taut narrative with crackling dialogue."

"If you enjoy realistic legal thrillers ... Identity Crisis will be a genuine treat."

--Jeremiah Healy, Author of Rescue, Turnabout and The Only Good Lawyer

Debbi Mack is the New York Times bestselling author of the Sam McRae Mystery Series. She's also published one young novel and a thriller. In addition, she's a Derringer-nominated short story writer, whose work has been published in various anthologies. Debbi is also a screenwriter and aspiring indie filmmaker. Her first screenplay, The Enemy Within, made the Second Round in the 2014 Austin Film Festival screenplay contest and semifinals in the 2016 Scriptapalooza contest. Identity Crisis has been optioned by a film producer. Among other things, Debbi adapted the novel into a screenplay. A former attorney, Debbi has also worked as a journalist, librarian, and freelance writer/researcher. She enjoys walking, cats, travel, movies and espresso--not necessarily in that order. --このテキストは、paperback版に関連付けられています。

Glyn Smith-Wild
5つ星のうち4.0 Something different.
2014年6月11日に英国でレビュー済み
Amazonで購入
A slightly different take on a detective novel, the main character not being a police officer, but a lawyer. The story drags the reader in and tends to get a bit over-complicated towards the end. It is doubtful that a lawyer would do the things she did without being in trouble with the police authorities herself, but no matter, it made a thrilling read.
The ending? Well, I still don't know exactly what happened in the end. I had to read the final three chapters again in case I had overlooked something, but I don't think I did. It seemed as if Debbi had run out of paper - or time. Shame.
Overall, a book that I had difficulty putting down, and a good start to a writing career.
続きを読む
役に立った
フィードバックを送信中...
フィードバックをお寄せいただきありがとうございます。
申し訳ありませんが、お客様の投票の記録に失敗しました。もう一度試してください。
違反を報告
レビュー を日本語に翻訳する

Galning
5つ星のうち5.0 Murder without gore
2011年7月14日に英国でレビュー済み
Amazonで購入
I tend to read "grittier" novels than this - but ID Crisis zipped along nicely. I perhaps would have given it a 4.5 star for a couple of things like the scene where the mob tries to beat the answer out of Sam (would they have gone in so heavy, so quickly, on a woman?) - but that was only a couple of pages and maybe that's how it would have been.

Although it's a crime thriller she's avoided pages of gore (nice change) and there's no sickening female torture scenes, which seem to be in so many crime books now. I read it in one sitting and, tellingly, I didn't skip any pages. Often I find books go off on pages and pages of inter-character dialogue or "fleshing out characters" with flashbacks that you know are not adding anything to the plot and you end up speed reading (or maybe that's just me). Not in this case - read every word.

D. Thomson
5つ星のうち4.0 Enjoyable first novel
2011年5月20日に英国でレビュー済み
Amazonで購入
This is a really good legal thriller, and I'm sure there's a lot of mileage in the lead character for future books. I have to say that at times the story got a little complex, the interaction between many different characters got occasionally confusing and the action somewhat slow and long drawn out. This stopped me giving it the fifth star. But for a first novel, it is really excellent and certainly left me wanting to learn more about Sam McRae and her legal exploits.
At the Kindle price its an absolute steal and I can totally recommend it. I've already downloaded the follow-up, so that says it all really.
続きを読む
4人のお客様がこれが役に立ったと考えています
役に立った
フィードバックを送信中...
フィードバックをお寄せいただきありがとうございます。
申し訳ありませんが、お客様の投票の記録に失敗しました。もう一度試してください。
違反を報告
レビュー を日本語に翻訳する

Maria
5つ星のうち3.0 legal thriller
2011年6月3日に英国でレビュー済み
Amazonで購入
The female lawyer in this seems like a character who will develop well in further books, but the story was more about her playing private investigator than a lawyer. Her own identity theft is slightly involved but it is mostly about getting her client off a murder charge. There were an awful lot of loose ends, though & that spoilt this for me as they seemed interesting characters. I will read the next one as I think the first of a series isn't always the best way to judge these books.
続きを読む
6人のお客様がこれが役に立ったと考えています
役に立った
フィードバックを送信中...
フィードバックをお寄せいただきありがとうございます。
申し訳ありませんが、お客様の投票の記録に失敗しました。もう一度試してください。
違反を報告
レビュー を日本語に翻訳する

Mrs. Marion F. Cozens
5つ星のうち5.0 Good read
2013年5月2日に英国でレビュー済み
Amazonで購入
My husband is the one who buys the Kindle books. He downloads them to his ipad.

He never goes to the Library now because the large print books are in small supply, but on the iPad he can enlarge the writing to his liking.

Amazon Customer
5つ星のうち5.0 Pretty Good
2011年8月12日に英国でレビュー済み
Amazonで購入
The thing I liked most about this book are the characters; they are well sketched, likeable and you easily warm to the heroine. The pace is easy going but keeps you turning the page, eager to find out more.
The plot is a little convoluted but well thought out.
続きを読む
役に立った
フィードバックを送信中...
フィードバックをお寄せいただきありがとうございます。
申し訳ありませんが、お客様の投票の記録に失敗しました。もう一度試してください。
違反を報告
レビュー を日本語に翻訳する

Avid Reader
5つ星のうち5.0 Fast paced, well written, and fun
2019年12月8日にアメリカ合衆国でレビュー済み
Amazonで購入
Identity Crisis is fast paced with a complex plot that kept me guessing until the end. The protagonist Sam McRae has a dogged determination and dry wit that makes for an interesting character. The quality of the writing added to the enjoyment of the story. The dialog between the characters is crisp and entertaining. Vivid, unique, and colorful descriptions make the characters come alive. A man peered at Sam “with his head cocked to one side like a pigeon’’; a woman’s hair was “held loosely with one of those hair clips that look like something you’d use to seal a bag of potato chips”; the design of a big black Lincoln Continental “suggested a rolling, black casket”; a woman at the desk of a seedy motel had “a mole of unique proportions on her nose and assured us the ice machine was probably working”; a man wearing a “paisley satin smoking jacket…loose-fitting yellow satin pajama pants and holding a scotch and soda…looked like Hugh Hefner’s gay younger brother”; and on and on. Altogether a very enjoyable read.
続きを読む
役に立った
フィードバックを送信中...
フィードバックをお寄せいただきありがとうございます。
申し訳ありませんが、お客様の投票の記録に失敗しました。もう一度試してください。
違反を報告
レビュー を日本語に翻訳する

Elizabeth Gerhardt
5つ星のうち3.0 A light read murder mystery
2015年9月9日にアメリカ合衆国でレビュー済み
Amazonで購入
This is a light read for the beach or travelling. The protagonist is a lawyer who is nice to her client, but don’t look too closely at her ethics. The supporting cast ranges from rich club owner to hires ripping off the business to mob thugs and murder victims. Others appear as the book progresses and characters’ secrets become known.

My confusion arose from the title of the book, which did not mesh with the action, which involved murders, accusal of the lawyer’s client, injuries to the lawyer by the Mob, and character name change, but where was the identity crisis? A Post Office box she didn’t open in the lawyer’s name with somebody else’s mail in it? A piece of paper with her social security number on it that mysteriously disappeared? No follow up on either item.

If either of these clues were supposed to indicate attempted identity theft, no further actions supported this. The term “identity theft” normally applies to a very serious illegal crime, but in this case “Identity Crisis” appears to be used more as an attention getter for the book than an actual case. You might enjoy this book as a murder mystery but don’t be led astray by the title.