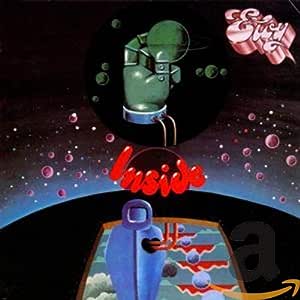 Remastered reissue of the German prog rock outfit's 1973album, their second overall & first for EMI. 6 tracks including 'Land Of No Body' and 'Inside'. 2000 release. Standard jewelcase.

Sentinel
5つ星のうち5.0 A dark horse!
2010年11月30日に英国でレビュー済み
形式: CDAmazonで購入
First heard this in a record shop in the early 70's: couldn't believe the amazingly dark, mysterious sounds of an organ/guitar/percussion mix. I suppose you could categorise it as some form of early Krautrock/progressive/heavy rock. What raises it above all these, is that the songs are well constructed and played, with plenty of variety (pace,melody, guitar/organ interplay), and some great production work, ensuring some spellbinding stereo effects, and much sensitive and subtle work, which you wouldn't expect with this genre of music. Much of this will linger in your head long after you've heard it. All the major tracks are impressive, with unexpected changes of direction and some lovely percussive effects.The vocals are classic 'broken English' and not particularly strong, but curiously they seem to add to the overall exotic strangeness of this melodically rich and varied album. Well worth investigating.
続きを読む
7人のお客様がこれが役に立ったと考えています
役に立った
フィードバックを送信中...
フィードバックをお寄せいただきありがとうございます。
申し訳ありませんが、お客様の投票の記録に失敗しました。もう一度試してください。
違反を報告
レビュー を日本語に翻訳する

J.Park
5つ星のうち4.0 Heavy psychedelic/space rock from Eloy
2009年3月18日にアメリカ合衆国でレビュー済み
形式: CDAmazonで購入
This 1973 album by German outfit Eloy is pretty good and shows them practicing a heavy brand of psychedelic/space rock. Although the influences of the British groups can be felt here and there (Pink Floyd, Jethro Tull), there is a distinctly "Eloy" quality to the music.

Musically, the tracks alternate between spacey sections and heavier passages where the group is going full steam ahead. While I prefer the spacey parts, I also enjoy the spirited ensemble playing and great "jamming". The guitar playing also has a bit of a hard edge to it, but it is neither overbearing nor distracting. Noticeably, there are no synthesizers to speak of, although there is some nice Hammond organ work. The drummer is very good and really drives each track along. Finally, while the vocals by lead vocalist Frank Bornemann are presented in English with a very heavy German accent, they really do not bother me at all. Frank was also influenced by Ian Anderson (of Jethro Tull) and you can hear some of that in his vocals as well.

This reissue is pretty good and features two bonus tracks that are pretty good, photos of the band, lyrics (in English), and liner notes (in German).

Overall, this is a fine example of heavy space rock that finds Eloy at an early developmental stage. While some of their best, synthesizer-heavy albums were still a few years away (Ocean, 1977), this is still a pretty good album. Recommended along with the stylistically similar follow-up Floating (1974).

Driftfoot
5つ星のうち4.0 Inside - Damn fine Eloy
2013年1月29日にアメリカ合衆国でレビュー済み
形式: CDAmazonで購入
This album is an absolute classic...Eloy`s 2nd album...such a unique and driven sound,German rock style...
You can tell its fresh and new,the band rocking and jamming out, and that sound...
'Land of nobody' !!!! 'Future city' !!!! 'Inside' !!! 'Up and down' !!! never had i heard such prog?ROCK!!!!
And no one`s come even close since.
This album and 'Floating' in '74 are much the same...Eloy`s finest 'cept for the 80's three (Colours,Planets and Time to turn).
As always,do yourself a favour and get 'em all...Eloy...the worlds proud of you German art rockers.
For me 4 1/2 stars.
続きを読む
4人のお客様がこれが役に立ったと考えています
役に立った
フィードバックを送信中...
フィードバックをお寄せいただきありがとうございます。
申し訳ありませんが、お客様の投票の記録に失敗しました。もう一度試してください。
違反を報告
レビュー を日本語に翻訳する

Steven Sly
5つ星のうち4.0 Eloy - Finding Their Footing
2012年6月5日にアメリカ合衆国でレビュー済み
形式: CDAmazonで購入
"Inside" was only the second album from Eloy, but these guys were already starting to stretch their musical wings and explore a variety of musical territories. The original album consisted of only 4 tracks anchored by the 17 minute plus epic "Land Of No Body". This disc has a lot of variety and as others have mentioned at times almost sounds like it could be Jethro Tull. Eloy were still finding their footing with this one and I don't think it is as strong as some of the releases that came afterwards, but this is another very good release from the band.
続きを読む
2人のお客様がこれが役に立ったと考えています
役に立った
フィードバックを送信中...
フィードバックをお寄せいただきありがとうございます。
申し訳ありませんが、お客様の投票の記録に失敗しました。もう一度試してください。
違反を報告
レビュー を日本語に翻訳する