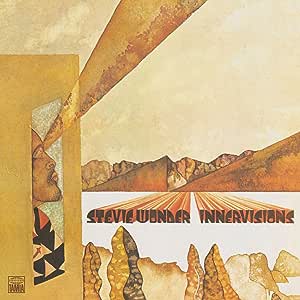 From the summer of '73, every cut a winner. Includes Higher Ground; Living for the City; Don't You Worry 'Bout a Thing , and more.

Martin the Harrier
5つ星のうち5.0 A superb trilogy of albums
2019年8月15日に英国でレビュー済み
Amazonで購入
I recently purchased the three early 1970's albums Talking Book, Innervisions and Fulfillingness First Finale. Obviously I was aware of the singles from radio airplay but have been very pleasantly pleased at just how good these albums are.
Melodic and vibrant, this is the sound of an artist at the top of his game. Unbelievably he also plays the majority of instruments on the songs with some notable 'guests' - Jeff Beck on 'Lookin' For Anothe Pure Love' (Talking Book) for example.
There is also a cutting social message in some tracks which in early 70's America would have been quite something - very different from the 'Little Stevie Wonder' of the 1960's. No wonder he insisted on full artistic control before re-signing to Motown.
Fantastic.
続きを読む
6人のお客様がこれが役に立ったと考えています
違反を報告
レビュー を日本語に翻訳する

oldfellayoungman
5つ星のうち5.0 Thank you, Hozier
2019年12月14日に英国でレビュー済み
Amazonで購入
Thank you to Hozier for covering Stevie Wonder’s classic song “Living for the City” in his recent concert, which prompted me to buy the whole LP. It’s over 30 years since I had this album and I’d forgotten just how brilliant it is. It sounds just as fresh, contemporary and exciting as it did when it first came out and there really isn’t a dud track on it. A masterpiece from a musical genius which rises above time and genre.
続きを読む
4人のお客様がこれが役に立ったと考えています
違反を報告
レビュー を日本語に翻訳する

Mandrek Larl
5つ星のうち2.0 "Innervisions" is not going to make me a Stevie Wonder convert; it's too tame for my tastes ...
2020年9月23日に英国でレビュー済み
Amazonで購入
Inspired by BBC4's "Soul America" series to give soul a go I've bought "Innervisions" (I've also bought Isaac Hayes "Hot Buttered Soul" but that's another story). However I'll be honest right upfront and admit that I have never really liked soul music, funk maybe but soul no; and I've always found Stevie Wonder's songs to be too sickly sweet for my tastes, that is with the exception of "Living For The City" and "He's Misstra Know It All" and they're both here.

Now I remember "Innervisions" being released as I entered my teens; and from a bit of digging I've learnt that it was Stevie Wonder's sixteenth [!] studio album, it marked the "transition from Little Stevie Wonder to a more musically mature, conscious and grown-up artist", and has been ranked in the top thirty of Rolling Stones Greatest Albums of All Time land [thanks Wiki - other online information sources are available but I'm too lazy to use them]; and as it includes "Living For The City" and "He's Misstra Know It All", so it seemed to be a good place to dip my toe into the Stevie Wonder waters.

Sorry, "Innervisions" is not going to make me a convert; it's too disappointing, too tame, too much soul and not enough funk. "Living For The City" is of course wonderful and an extended seven minute album version should have been an opportunity for SW to cut lose and get funky but that opportunity is lost with the gratuitous city life vignette, this may be as relevant today as it was in 1973, perhaps more so, but it spoils the flow; and listening again to "He's Misstra Know It All" it's still really good but somehow it's not as exciting as I remember it being when I first heard it.

And as for the other seven tracks? "Too High" is a good opener with a bit of funk and a wonderful tingling high-hat but the dodo-do-do-do-dodos turn me off and overall its a bit repetitive; "Visions" is precisely the sort of ballad I associate with Stevie Wonder and that's why after six decades on the planet this is my first Stevie Wonder album. "Living For The City" follows, and then its "Golden Lady", a mid-tempo ballad, this is better than "Visions" but doesn't really move me although next up and the original side two opener "Higher Ground" is a rocking funky thumbs-up, this is more like the sound and tempo I was hoping for. "Jesus Children of America" rocks continuing the "Higher Ground" funky vein and side two is sounding good, but then it's back to the slow-balladry with "All In Love Is Fair" and I hit skip to get to the latin-tinged "Don't You Worry 'Bout A Thing", it's fun but not exciting before the final cut "He's Misstra Know It All" and I'm left feeling disappointed.

I'm pleased I tried "Innervisions" because it's a solid album with the right amount of variety, it's well written, it's well played and it's well produced but it's just not for me; I probably won't play it again in full and I'm afraid I won't be back for more, sorry.
続きを読む
違反を報告
レビュー を日本語に翻訳する

Finbar the looney
5つ星のうち4.0 MUSICAL MAGIC
2012年3月6日に英国でレビュー済み
Amazonで購入
Stevie Wonder has always been a hero of mine,and this is one of his best efforts,in my opinion,"music of my mind"is by far his best,although this is not far behind, the quality of the songs in amazing.
"Too High"starts the ball rolling,with uts slighly fuzzy sound and mid tempo beat,this in turn leads straight into the wonderful(forgive the pun!!)"Visions" a slow paced ballad that just oozes class,The next track is in the running for being one of stevies greatest achievements,the epic "Living for the city" which was a hit for Gillan,i seem to recall.
"Golden lady" is another mid paced ballad,followed by the classic"Higher ground".
"Jesus children of America"is followed by "allin love is fair" which would have been perfect for George Benson.
"Don't you worry bout a thing"is pure joy and is followed by the political exocet missule,Stevie at the cutting edge"He's mistra know it all"
A landmark album