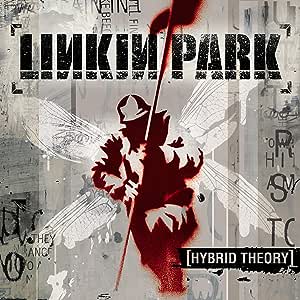 When the first track from a band's debut album gets added to major rock stations four weeks before its official release, it must be something very special. That's the case with "One Step Closer" from Linkin Park's first album, Hybrid Theory. Built on an aggressive hard rock foundation, flavored with hip-hop vocal stylings and electronic fourishes, as melodic as it is confrontational, with a strong lyrical message, Linkin Park is diverse and unique. It's also one step closer to scoring an important debut album - and that's not just theory. Certified Multi-Platinum (8 times) by the RIAA. (4/02)

WhiteFlats
5つ星のうち5.0 A masterpiece
2017年8月29日に英国でレビュー済み
Amazonで購入
What can I say? I don't think there are words that could do this review justice. In short, this album is breathtaking. Every time I listen, I respect and understand the psyche of Chester and Co better. Like many, I was left shocked and devastated by the death of Chester. But listening with fresh ears, to the lyrics of this album... it was there, it was always there in the songs. A warning that suicide would take him eventually. He fought it so hard with such spirit. RIP Chester.
続きを読む
14人のお客様がこれが役に立ったと考えています
違反を報告
レビュー を日本語に翻訳する

TP
5つ星のうち5.0 Amazing Album
2020年4月9日に英国でレビュー済み
Amazonで購入
I got into Linkin Park late as I am 60+. Heard them on a long haul flight and was totally hooked. Bought 4 of their albums for a fair reflection of their work. This album, Hybrid Theory, in my opinion, is their best. In fact many of the 12 tracks are poignant which is very rare for me.
続きを読む
3人のお客様がこれが役に立ったと考えています
違反を報告
レビュー を日本語に翻訳する

Matt182
5つ星のうち5.0 Transforming the theory!
2012年8月6日に英国でレビュー済み
Amazonで購入
Linkin Park were originally called 'Hybrid theory' but had to change their name due to another band already having an identical name. Hybrid theory is an incredible album! This band are hugely talented and it shows throughout the mix of songs. They are definitely the best band of the Nu metal genre and this debut album is 1 of the best debut albums I have ever heard. I bought this album after Minutes to midnight and I wasn't sure about the band at that point because I loved Meteora but after hearing this album I fell in love with the band all over again.

The band are talented musicians but instead of a straight-forward metal sound the band mix it up with Joe Hahn on turntables and have little electronic beats and clever pieces. That's what makes them unique.

The singles from the album are fantastic; Papercut, Points of authority, One step closer, In the end and Crawling (my favourite with its soft verses and powerful chorus). The rest of the songs are also strong, powerful, deep, emotional and aggressive numbers that are easy to relate to. My favourite non-single being With you. Chester's an incredible vocalist and really shows it off on this album with screaming vocals and soft, melodic singing. Mike is a pretty great rapper and the mix of the 2 is perfection! The songs are pretty intense and really move you as a listener.

This is Linkin Park pretty much at their very best! As far as I'm concerned everything after Meteora pales in comparison to this masterpiece!
続きを読む
6人のお客様がこれが役に立ったと考えています
違反を報告
レビュー を日本語に翻訳する