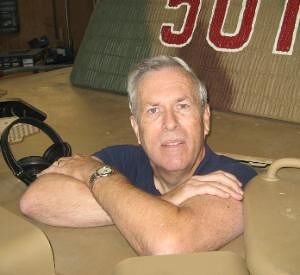 Military Vehicles Magazine, December 2006
“Humvee at War showcases the iconic vehicle of the Gulf Wars in the many roles and configurations it has taken over the years…The photos are bright, clear, and up-to-date. The writing is engaging. This is a very fine book for anyone with and interest in the HMMWV. The quality of the publishing, writing, and photography, along with the inclusion of an index make this a worthwhile addition to the advanced MV library.”

Michael Green is a freelance writer, researcher, and photographer who specializes in military, transportation, and law enforcement subjects with more than ninety books to his credit. In addition, he has written numerous articles for a variety of national and international military-related magazines.

george millar
5つ星のうち5.0 outstanding
2013年5月22日に英国でレビュー済み
Amazonで購入
this is a very nice book and is very full of details great to use for a guide when making scale models
続きを読む
違反を報告
レビュー を日本語に翻訳する

Alan D. Cranford
5つ星のうち5.0 I learned a few things, too.
2006年7月3日にアメリカ合衆国でレビュー済み
Amazonで購入
This book has photos, data plates, and a usable index--but no bibliography. The latter is not important because there are many books on the HMMWV. I am an official HMMWV operator and this book is useful for describing the many variants of this tactical truck. I've seen many of them--the VISMOD HMMWV shown on page 109 is a frequent visitor to OMS-1 in Carson City--or one of the sister trucks belonging to the 1/221st CAV, a Nevada Army National Guard unit that provides OP4 at the National Training Center. The contact truck on Page 113 is sitting low to the rear because typically we operators overload these little trucks by carrying what we need to do the mission instead of adhering to the 1.25-ton off-road payload limit. Beefing up the suspension and calling it a 2.5-ton truck didn't change the transmission and engine, so my unit's HMMWV's tend to block traffic when we hold training convoys on Nevada highways--the average traffic speed is something like 70+ miles per hour, and the HMMWV's engine is governed for a maximum speed of 55, and when overloaded, in high temperatures at altitudes of more than 6000 feet above sea level, and towing a trailer uphill, sometimes all we can manage is 30 MPH. Given all that this remarkable vehicle is expected to do, the HMMWV does a credible job.

Michael Green and Greg Stewart devote the first part of Humvee at War to the HMMWV's predecessors, the World War Two jeep and its descendants. Armored cars are covered (page 81 sidebar) because the soft-skinned HMMWV was not intended as a combat platform--though it has been used as one since its introduction in the 1980's. An MP unit in Panama during Operation Just Cause assaulted a fortified compound with its unarmored HMMWV's, leading to the development of the modern hardened Hummers described. Problems with these are pictured on Page 66--look at the suspension! The regular HMMWV fiberglass and alloy bodywork won't stop rifle bullets. That has been known since at least World War One, and the lack of off-road mobility was an issue on the Western Front--but economical operation was one of the factors in HMMWV development. Page 108 hints at some of the vehicles fielded because of the shortcomings of the HMMWV--these vehicles include militarized editions of the John Deere Gator for base cluster support and the Marine Corps ITV (internally transported vehicle, a Daimler Chrysler diesel-powered, five-cylinder, four-wheel drive vehicles--a modified Mercedes-Benz `Gelandeswagen' produced in Graz, Austria). The Gator addressed the operating expense of the standard HMMWV when one or two people and a few hundred pounds of payload were used for housekeeping errands on sprawling military camps in the Middle East and elsewhere--the HMMWV really needs a crew of two at all times due to bulk and weight. The ITV addresses the problem that American military helicopters were designed to carry the old jeep and the HMMWV is just too wide for internal carry (see page 26). The old jeep had problems too, such as being overweight, not carrying enough people or cargo, was "too slow," got stuck sometimes...the HMMWV is a good compromise based on 1970's automotive technology and can be improved. Whether or not this will happen is a matter of economics. There are tens of thousands in use, operations in the Middle East are wearing them out, and despite shortcomings a HMMWV replacement that offers improved performance or lower operation costs will be mission: impossible.

Pages 30-31 feature one non-military owner's impressions of the HMMWV compared with the World War Two jeep. He's not exaggerating about being blind from inside a HMMWV, and even though this truck was designed so that anybody with a civilian automobile license could be quickly trained to operate the HMMWV, the feel of this mini-monster truck requires driver training. I've operated the older M151 MUTT, several CUCV models, even M113 armored personnel carriers, the M35-series 2.5 ton trucks and several models of the 5-ton military truck. I even conduct road testing of drivers on HMMWV's and 5-ton trucks in my Nevada Army National Guard unit today. Sometimes I need something bigger than the HMMWV and sometimes I need something smaller--but I feel lucky to have wheels at all most of the time.

Humvee at War will answer most of your questions about America's modern jeep replacement. It is a good reference source and I learned a few things from it, too.
続きを読む
6人のお客様がこれが役に立ったと考えています
違反を報告
レビュー を日本語に翻訳する

Rocky Racoon FL
5つ星のうち5.0 Very pleased!
2016年4月29日にアメリカ合衆国でレビュー済み
Amazonで購入
Book arrived quickly and in excellent condition. Haven't had much time to read it yet but leafing through, It appears very detailed and I'm sure it was worth the money.
続きを読む
違反を報告
レビュー を日本語に翻訳する

Presentation was a bit staid though, reminded me of technical manuals from the 70's.

Overall, a good book for the price.