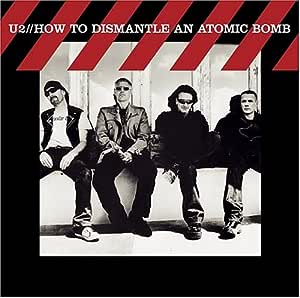 How to Dismantle an Atomic Bomb CD, インポート

U2 formed in their native Dublin in 1978 and remains intact with its four original band members: Bono, Larry Mullen, Adam Clayton and The Edge. The band has sold more than 120 million records worldwide in an extraordinary career that has firmly established them as one of the world's greatest rock `n' roll bands. Along the way, U2 has earned a phenomenal 14 Grammy Awards, seven of which were for their last studio album, 2000's `All That You Can't Leave Behind,' including two consecutive awards for 'Record of the Year.' As popular for their legendary live shows as for their groundbreaking albums, U2 innovates and inspires while packing football stadiums and sweaty clubs around the world. What is next for the group that continues to reinvent themselves and push the boundaries of music?

The Punk Panther
5つ星のうち4.0 City of blinding lights....
2018年9月12日に英国でレビュー済み
Amazonで購入
It is now that U2 albums started becoming "just another U2 album" for me. They now needed more of an effort to get them out and properly listen to them. Having said that, though, doing so has proved to be a pleasurable experience, when I have listened to them, and each of them reveals some hidden depths.

I have read a wise comment somewhere that said that at many points in the career, U2 were often trying to make up for their previous album's perceived shortcomings. While "All That You Can't Leave Behind" was certainly not a failure, it seemed to me that on this album they tried to show that they could still rock out. This is one of their brashest, rockiest albums. All that dance music obsession that filled their incredibly bass-heavy, clunky nineties work had been left behind as they tried to to recapture their old edge (no pun intended). Electronica was left behind, the synthesised rhythms, drums and sledgehammer bass lines were gone too, as were Bono's muffled, mumbling vocals. It is, like its predecessor, an invigorating album.

"Vertigo", it has to be said, is a rousing, stadium-pleasing rocker full of riffs and a hooky chorus. It was tailor-made as a live set opener and indeed was duly used as such, to great effect. It was one of their most instantly appealing songs for a considerable while. It even had hints of the early eighties in some of the guitar backing and a great rumbling bass line. "Miracle Drug" has a sumptuous guitar and vocal intro before kicking into a riffy rhythm and more harking back to the "War" album in its keyboard, drum and guitar backing and the general feel of it. "Sometimes You Can't Make It On Your Own" is a slow-burning, atmospheric rock ballad with Bono's vocals impressing. There is some killer guitar here too. Much as albums like "Zooropa" and "Pop" were admirably experimental and both are thoroughly interesting, challenging listens, I have to say I prefer this U2.

I am not a copper-bottomed, dyed-in-the-wool or whatever type of U2 fan. I own all their albums, but as a admirer as opposed to an aficionado so I often find the fact that it now seems fashionable to criticise them a bit strange, because even time I listen to their albums I enjoy them. Take a track like "Love And Peace Or Else" - it is big, powerful, full of hooks and riffs and earnest lyrics and yes, Bono does himself no favours at times, but the guy has a great voice. This track is essentially a great post-punk track given stadium-ready power. "City Of Blinding Lights" is a great track, let's be honest. One of those typical early eighties guitar, bass and drum intros takes me right back to U2 circa 1983. No "poor old U2" can be applied derogatorily to this song. Not at all. Its fire burns brightly. "All Because Of You" is an exhilarating, riffy rocker. Yes, tracks like "Numb" and "Lemon" had a sort of mysterious, dense appeal, but this is much better.

"A Man And A Woman" is a bassy and acoustic guitar-driven catchy number. "Crumbs From Your Table" is quite an intense song with some typical, nostalgic-sounding guitar sounds. Some criticise U2's guitar sound because it is so recognisable as them, but surely that is a strength, like Keith Richards, Jimi Hendrix or Brian May. The Edge has his trademark sound and that is a good thing. It is what makes U2 U2. "One Step Closer" is an evocative, mournful song. Bono does these songs so well. "Original Of The Species" has a sort of Beatles-ish late sixties sound to it.

"Yahweh" is very much something that has echoes of the "War" album, for me. It has a moving-sounding refrain, and yet another excellent vocal. Unlike the usual slow, reflective number to close the album, we get the rhythmic, addictive "Fast Cars", with some beguiling Spanish-sounding guitar. This has been a most enjoyable album.
続きを読む
2人のお客様がこれが役に立ったと考えています
役に立った
フィードバックを送信中...
フィードバックをお寄せいただきありがとうございます。
申し訳ありませんが、お客様の投票の記録に失敗しました。もう一度試してください。
違反を報告
レビュー を日本語に翻訳する

Minkus
5つ星のうち2.0 Is this U2?
2013年1月5日に英国でレビュー済み
Amazonで購入
As an old U2 fan, after Zooropa and also due to U2 lazyness in releasing albums and Pop, I kind of gave up on them.
The only good moment after early 90s was the album "All can't you leave behind". I just bought this for the very low price (4£) and because I kind of liked "Sometimes you can't make it on your own") but basically I gave up on it very soon. Far from my mind to buy the latest album, even for 2£.
The times of "New year's day" or "Where the streets have no name" are so farway. There is a time to retire even for the greatest bands. Hope to be wrong and to be amazed in the future.
続きを読む
1人のお客様がこれが役に立ったと考えています
役に立った
フィードバックを送信中...
フィードバックをお寄せいただきありがとうございます。
申し訳ありませんが、お客様の投票の記録に失敗しました。もう一度試してください。
違反を報告
レビュー を日本語に翻訳する

N.G.dave
5つ星のうち4.0 u2 album
2012年7月1日に英国でレビュー済み
Amazonで購入
You can tell with this album that u2 have done something special not with other albums such as war,achtung baby, pop,they bring rock and death together.As in the song sometimes you can,t make it on your own and miracle drug you can feel bono,s pain at losing his farther to cancer. But with other songs on this album such as city of blinding lights and love and peace or else they still have the ability to make rock music something different. If your new to u2,s music check this one out then check out there, first album boy then compare how far they have come .
続きを読む
役に立った
フィードバックを送信中...
フィードバックをお寄せいただきありがとうございます。
申し訳ありませんが、お客様の投票の記録に失敗しました。もう一度試してください。
違反を報告
レビュー を日本語に翻訳する

a guy
5つ星のうち4.0 onlyme
2014年2月12日に英国でレビュー済み
Amazonで購入
not one of u2s best albums and the price for this one proves it , less than a pound , far less than a pound . this is from the days when they had lost their way and tried their hand at everything till they found their way to the moneybags again
続きを読む
役に立った
フィードバックを送信中...
フィードバックをお寄せいただきありがとうございます。
申し訳ありませんが、お客様の投票の記録に失敗しました。もう一度試してください。
違反を報告
レビュー を日本語に翻訳する