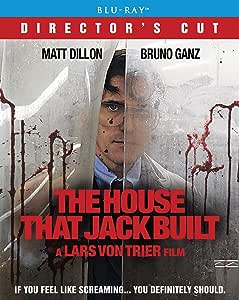 The House That Jack Built [Blu-ray]

Alexander F. Wüst
5つ星のうち2.0 Not everybody can hear
2019年3月14日に英国でレビュー済み
形式: Blu-rayAmazonで購入
How a movie, in this day and age, comes without subtitles is beyond me.

Chris
5つ星のうち2.0 Surprisingly dull and uninteresting
2019年3月14日に英国でレビュー済み
形式: Blu-rayAmazonで購入
About halfway through, I'm extremely bored by this, which isn't at all what I expected from a Lars von Trier film about a serial killer. Undoubtedly a deliberate move by von Trier, the acting in this seems consistently forced and awkward to the point where it's cringeworthy just to watch it. There are indeed some unpleasantly violent scenes, but again, they're curiously devoid of any captivation or emotion; it's "just" someone who kills people "getting on with killing people". It's difficult to explain, but not in a way that I'm trying to persuade you that it's interesting to watch in any way.
続きを読む
5人のお客様がこれが役に立ったと考えています
役に立った
違反を報告
レビュー を日本語に翻訳する

dirk in alty
5つ星のうち4.0 much ado about next to nothing.
2019年3月13日に英国でレビュー済み
形式: Blu-rayAmazonで購入
Controversy is what follows L.V.T. and this was no different.So I waited for the blu ray release to watch it.Great performances,beautifully photographed and watchable for the first few "episodes" with it's dark black humour.Then it gets uncomfortable but if have seen the likes of Henry/Natural Born Killers/Man Bites Dog you'd know what to expect.Except you probably wouldn't ! Did not think the violence was over the top visually,one moment was seen nearly 50 years ago in Soldier Blue.The ending was surreal to say the least.The extra's last just short of an hour but are mainly of Lars,many pieces are repeated in the 2 major interviews and gives some guidance if struggling with what you have seen.
続きを読む
2人のお客様がこれが役に立ったと考えています
役に立った
違反を報告
レビュー を日本語に翻訳する

Deathrider7
5つ星のうち5.0 A strange but rewarding film
2019年3月23日に英国でレビュー済み
Amazonで購入
If someonehad said to me I'd ever watch a Matt Dillon film. Iwould have said yeah right, course I will. I don't watch pretty boy films.
How wrong was I! I first heard about this film ages ago and scoured the net to see the trailer. I found it interesting so as soon as Amazon got a release date for The House That Jack Built I immediately ordered it. I wasn't disappointed at all. It had the strange logic to give a serial killer OCD and on one of the kills it does get bizarre as he has to check every nook and cranny to make sure he was going to get away with it. Another thing that surprised me is that Uma Thurman is in this film. Another bit of humour in the chats between her character and Jack, before her end comes.
The only bit I did find a little strange was the end of the movie. I'll have to watch it again to see if I understand it any better. It's my first Lars Von Trier movie and I may have to seek out the others.
続きを読む
1人のお客様がこれが役に立ったと考えています
役に立った
違反を報告
レビュー を日本語に翻訳する

Yves Troendle
5つ星のうち3.0 Mediocre von Trier can still cast a long shadow
2019年6月22日に英国でレビュー済み
Amazonで購入
I've given up on Von Trier ever reclaiming thr heights of "Europa" or "Breaking thr Wave", but okay, he was still doing arrogantly grand and daring things in, for example, "Melancholia" and "Nymphomaniac". "Jack" is, to me, another step down. To wit, in each episode, as he moves in for each kill, Jack seems to have a different basic personality -- more of a collage of different killers than one Jack -- and in a number of these episodes we so clearly see what's going to happen that we can well wonder how long we'll be kept waiting.
Does the film drive home any insight about the psychology of serial killers? I'm still waiting for enlightenment on that.
My favorite part was a completely unexpected, and extensively developed, "Epilogue", which comes from a totally different narrative world from the rest of the film, and at least pretends to put it all in a fresh context. Gutsy. Von Trier always was that.
続きを読む
1人のお客様がこれが役に立ったと考えています
役に立った
違反を報告
レビュー を日本語に翻訳する
その他の国際レビューを読み込む

Kyle
5つ星のうち5.0 Brilliant Stuff (Not for the feint heart)
2019年3月31日に英国でレビュー済み
Amazonで購入
Only ever came across this film due to the uncanny amount of controversy surrounding director, Lars Von Treir. If gore makes you feel sick, uncomfortable or triggered, then please for the love of Christ, avoid this movie and don't come write a 1 star reviews of "Why I think this film is unacceptable" CRAP. Yes, you see kids die or the later, PEOPLE, in murderous grotesque ways. Get over it. It's a movie, as children/people die every day in reality. However, if you enjoy Serial Killer movies, can stomach the gore but enjoy a thorough and detailed look into a killer's mind with a hint of black comedy? Then "The House That Jack Built" is a movie that may catch your attention. It's 3 hours long, grab some snacks and make sure you keep focused.
続きを読む
3人のお客様がこれが役に立ったと考えています
役に立った
違反を報告
レビュー を日本語に翻訳する

bibliovore
5つ星のうち5.0 Lars von Trier goes to Hell
2019年3月12日に英国でレビュー済み
Amazonで購入
refreshingly bleak,references to previous films, and Dante's inferno, Murder as art, and a 'hero' reminiscent of Henry the serial killer . Visually stunning, brutal,and draining to watch, and almost impossible to look away from.
There are moments of very dark humour here, but this is not for the squeamish.
It would be great if he did a comedy next....
.
続きを読む
2人のお客様がこれが役に立ったと考えています
役に立った
違反を報告
レビュー を日本語に翻訳する

Levana
5つ星のうち5.0 a movie NOT about a serial killer
2019年4月17日に英国でレビュー済み
Amazonで購入
Another great work from Von Trier, and no surprise. This movie is not about a serial killer - one would have reasons to argue the crimes never really took place . A movie about the human condition and its devastatingly misguided attempts at imitatio Dei, at being an "Architect" where the paradigm only permits man a modest "engineer". A chance at redemption in the end - as Von Trier allows in most of his movies. On other levels, a criticism of masculinity (and femininity), of the artist's condition, of the inherent limits of our inner voice and consciousness etc. Great, as always, a feast. The big surprise is Mat Dillon; really impressive.
続きを読む
1人のお客様がこれが役に立ったと考えています
役に立った
違反を報告
レビュー を日本語に翻訳する

Rosemary Thyme
5つ星のうち4.0 Jack: Portrait of a Serial Killer
2019年3月8日に英国でレビュー済み
Amazonで購入
Jack, an obsessive-compulsive serial killer who views his killings as art forms is the main protagonist in this psychological horror gory presentation from Lars von Trier. We follow Jack in his descent to total psychotic delusions through his obsession to achieve perfection in his murders while literally (and not) building his house. I did not find this to be a fun ride though it has some lighter moments for relief. Kudos to the special effects team which made the killings very realistic and to Matt Dillon for exceptional work. After the freezing cold Henry (1986) who enjoyed his "work", here's Jack who goes steps further falling into hell. Love it or loath it.
続きを読む
1人のお客様がこれが役に立ったと考えています
役に立った
違反を報告
レビュー を日本語に翻訳する

leif gunnar ødegård
5つ星のうち5.0 A BLOODY CASE
2019年3月15日に英国でレビュー済み
形式: Blu-rayAmazonで購入
TRIER DID IT AGAIN,BUT I LIKE HIS KIND OF TACKLING WITH THE ACTORS.AND HI IS NOT AFRAID TO TELL STORIS THAT WASHAPPEND BEFORE ,OR MAKE NAKED PEOPLE DO WHAT THEY DO,AND HI HAVE ALL THE BEST ACTORS.I GOT THE PACKAGE TO DAY ,SO I HAVE NOT SEEN IT YET.AND I KNOW THAT IT IS A STRONG THING.
続きを読む
1人のお客様がこれが役に立ったと考えています
役に立った
違反を報告
レビュー を日本語に翻訳する
その他の国際レビューを読み込む

Mr. D. M. Norcliffe
5つ星のうち2.0 OTT for the sake of been OTT
2019年3月13日に英国でレビュー済み
Amazonで購入
Matt dillion is very good actor but you have to question the reason behind shooting little kids so graphic on screen
続きを読む
2人のお客様がこれが役に立ったと考えています
役に立った
違反を報告
レビュー を日本語に翻訳する

Porter . literature historian.....and film buff.
5つ星のうち2.0 Pedestrian
2019年3月6日に英国でレビュー済み
形式: Blu-rayAmazonで購入
The acting is good..... The film itself is ok... I found it boring and slow.... And not a patch on American psycho.... Which I loved.... I only lasted half way through....
続きを読む
1人のお客様がこれが役に立ったと考えています
役に立った
違反を報告
レビュー を日本語に翻訳する