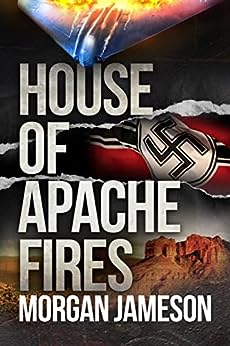 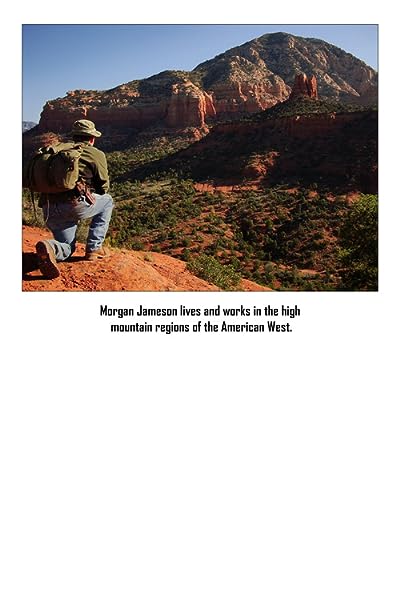 英語版 Morgan Jameson (著) 形式: Kindle版
すべての形式と版を表示
Sorry, there was a problem loading this page. Try again.
Badly shot up over Italy by a Messerschmitt nightfighter, P-61 Black Widow pilot Jake Ellison leaves the death and destruction of WWII Europe to return home to Arizona, only to be faced with the brutal murder of his ex-fiancee's younger sister.While his legs and heart heal in the Sedona sun, Jake finds himself trying to solve the mystery of Lily's death, only to be drawn into a fanatical Nazi plot to bring the U.S. to its knees - a mission that will strike at the very heart of America.


Praise for House of Apache Fires:

"Morgan Jameson's novel thunders so powerfully my windows are still rattling! Thank goodness he writes fiction--if his story were true, Americans would be seig-heiling our fuhrer today. Do yourself a favor and read this book now."--Shane Gericke, bestselling author of Torn Apart"

Avid Reader
5つ星のうち4.0 A strange story, but enjoyable
2016年8月5日に英国でレビュー済み
Amazonで購入
A strange book this one. It promised a lot, but ultimately fell short, for me. The narrative was split pretty much 50/50 between a group investigating a brutal killing in Arizona in 1944 and a crack squad of SS men on a commando mission to the USA. The two threads came together convincingly enough in the end, but I felt a measure of imbalance between the two threads. I found myself rushing through the Arizona chapters in my eagerness to get back to the Germans. The writing was good, but relied too much on cliches. I lost count of the number of times 'all hell broke loose'. The setting, in Sedona, Arizona, is one of my favourite places in the whole world. The descriptions of the locations took me back there.
続きを読む
違反を報告する
レビュー を日本語に翻訳する

hlhzimm
5つ星のうち5.0 The most exciting book that I have read in a long time
2021年12月23日にアメリカ合衆国でレビュー済み
Amazonで購入
This is one of the best written books that I have read. The author covers some very interesting subjects within his story. I have often felt that there was more to Pearl Harbor than was released by the government. It is only mentioned in passing in this story, but I felt it was important. As I said in the title this is a very exciting book.
続きを読む
1人のお客様がこれが役に立ったと考えています
違反を報告する
レビュー を日本語に翻訳する

Early Brown
5つ星のうち5.0 A prime example of what happens when detailed research meets a fertile imagination...
2014年11月10日にアメリカ合衆国でレビュー済み
Amazonで購入
One of the great things about a well-researched historical novel is that you finish it thinking, “I know that was fiction, but it could have really happened.”

For instance, few people other than history buffs know anything about the Horten bomber, a jet-powered flying wing developed by the Germans during WWII. Although the war ended before the program was complete, prototypes did fly and there’s no telling how the war’s end might have changed if one had been used offensively against the U.S. mainland.
That possibility is just one of the questions we’re invited to consider in “House of Apache Fires.”

Jameson writes about technology and places and people who actually existed and were actually connected to the war effort, then ties them all together with a rich story featuring parallel plot lines that converge for an explosive climax.

I won’t give any spoilers here, but there’s one scene in particular (you’ll know it when you read it!) that left me not just thinking, “I wonder if that could have happened,” but almost buying into, “I wonder if that’s what really did happen!”

Intellectually, I know it’s a novel, but at a gut level, parts of the story left me considering if what I know about American history is the whole truth and nothing but the truth.

Edwin Hanks
5つ星のうち5.0 Amazingly well done, great for WWII history and speculation buffs
2015年8月26日にアメリカ合衆国でレビュー済み
Amazonで購入
My initial reaction was split between "Wow, that's a big book" and "But it's about Gotha/Horten 229s!" But I quickly realized it wasn't just grognard porn. The author draws you in with a grisly murder mystery, then adds an espionage element, an assassination plot, Otto Skorzeny and (yes!) experimental German jet-powered flying wings. The book is long because it has so many interconnected storylines being masterfully woven into a coherent whole. The subplots keep you interested until the second half when the plans are really coming together and you can't put the book down. I saw one reviewer suggest this was "alternate history". I'm not sure if it's that or merely a cleverly selected set of speculative history storylines. For instance there were enough rumors that Germany's nuclear programs were further along than thought that W.E.B. Griffin picked up on the "U-boat carrying an atomic bomb" rumor for his stories. If the White House thought covering up the truth was important for national security, how would we know if FDR was felled by a bullet or an aneurism? Jameson works the storylines together in a way that it stands as "might really have happened, it was just covered up". I've heard more than once - once even from a mainstream source - speculation about a connection between Go/Ho-229s and the American southwest. Here, such speculations were inserted into the story plausibly and seamlessly. The characters are great, action was hot. Definitely watching this author!
続きを読む
1人のお客様がこれが役に立ったと考えています
違反を報告する
レビュー を日本語に翻訳する

MJ
5つ星のうち5.0 Good read set during WWII
2022年4月28日にアメリカ合衆国でレビュー済み
Amazonで購入
I enjoyed the characters and the storyline. The story is about a late WWII plot to sabotage key war facilities in the western US as well as a plan to assassinate FDR. My only quibble, as a horseman, is that horses are never kicked in the withers to make them go. The withers are the top of the shoulder blade and at the same level as your bum in the saddle.
続きを読む
違反を報告する
レビュー を日本語に翻訳する
すべてのレビューを参照します
問題を報告
この商品には、不適切な内容が含まれていますか?
報告
この商品は、著作権を侵害していると思いますか?
報告
この商品には、品質または書式設定の問題が含まれていますか?
報告