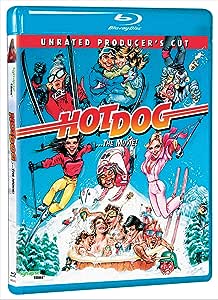 J. Thadeus Toad
5つ星のうち5.0 WTF Is A Chinese Downhill? Hot Dog Now In HD on Amazon!!!
2016年9月19日 - (Amazon.com)
Amazonで購入
Hot Dog The Movie is now On Amazon in glorious HD and widescreen!! It might be hard to accept as a concept but this movie is a thoroughly accurate portrayal of life on the slopes in the late seventies and early eighties. Especially the Tahoe and Colorado ski scenes at the time. Pastel colored ski outfits, fancy hairdos, mirrored Vuarnet sunglasses, pipes filled with pot and wild sex on the gondolas (Well, maybe not so much the latter, but plenty of the former). In fact, compared to the reality of the ski culture of the time, this movie might actually seem tame to someone who experienced the real ski resort lifestyle of the era. Yes there really were wet t-shirt contests which often got raided by the local gendarmes when both the tops and bottoms would come off. (Thanks to Jose Cuervo who often sponsored the events and provided the liquid courage) Who needed a wet t-shirt when you had full nudity? Wild parties and competitions were often held concurrently. In fact it was often hard to tell the two apart as either spectator or competitor. It was also a time when everyone seemed to be pushing the boundaries of what could be done on skis. Moguls, cliffs, powder, ice. It didn't matter, it was there to be attacked by the gangs of hot-doggers and the occasional mono-skier that were roaming the mountains looking for that new thrill. Today's skiers enjoy the benefits of huge gains in technique and , more importantly, the design of skis. Those short wide boards make almost anything ski-able. In the past 210 CM GS racing boards were the powder skiers choice and skiing the steeps was a whole different experience. In addition to the cultural and sociological changes that were happening in the Rockies and Sierra Nevada mountains, the snow in the seventies and early eighties throughout the western U.S. was usually plentiful and seasons often lasted into May and June, offering even more opportunities for combining skiing and debauchery. It wasn't at all unusual to see both guys and gals skiing naked or topless. Look, I admit this movie is goofy, the freestyle drama is over played and the acting and accents are hilarious. It also has some great skiing, truly funny jokes, several steamy scenes and the now classic Chinese Downhill as the grand finale. If you are a skier, you'll love it. If you're not, well it won't have a great deal of allure, but you still might make it to the finale, which is funny, exciting and well worth watching. Remember, always keep your tips up.
続きを読む
17人のお客様がこれが役に立ったと考えています
レビュー を日本語に翻訳する

It is a classic 80's comedy flick in the fact that it has no real plot or storyline. If you are looking for something deep and thought provoking, buy Carl Sagan's COSMOS. If LIFE is serious enough and you like to kick back and have a good laugh... Buy This!

If you loved Caddyshack, Revenge of The Nerds and Back to School... This one is right up your alley and it has all the trimmings of an 80's cult comedy. Alcohol, nudity, sexual innuendo, token minorities, resentment towards Europeans and absurd situations all wrapped in a blanket of cheesy 80's American Egotism! -- AND... Some absolutely amazing skiing performances caught on film that will leave you in awe.

Bottom line. Buy the movie and if you don't like it, chances are that Rodney Dangerfield wouldn't have liked you but Rudi Garmisch does.

Drive-In Kid
5つ星のうち5.0 Great movie with a good transfer
2009年2月5日 - (Amazon.com)
Amazonで購入
The movie is fantastic, I think it is the best of all of the skiing/snowboarding movies. You can definitely see that the folks who made "Out Cold" (also good) saw this movie. It is almost a "Caddyshack" of the slopes in a way, with the "slobs vs. the snobs" theme running through it. Some of the actual skiing scenes and the cinematography that go along with them are amazing and hold up quite well today.

The synth music is cheesy at times but it was reflective of the time, sort of charming actually. The acting is suspect at times, but overall the characters are compelling and funny at the same time. The girl who plays "Sunny" is great, and weirdly seems to have disappeared from the movie biz since.

I had a VHS copy of the movie but it was unwatchable due to the horrible quality of the sound track. The DVD may be pan and scan but overall the transfer is very clean and the sound is good.
続きを読む
5人のお客様がこれが役に立ったと考えています
レビュー を日本語に翻訳する

rockopico
5つ星のうち4.0 Classic raunchy comedy, but the best ski movie ever!
2011年12月24日 - (Amazon.com)
Amazonで購入
If you are looking for the best ski movie that actually has a plot and great comedy with fun skiing adventures then Hot Dog is the top Dog. There has been a few ski/outdoor comedies that have tried to compare to Hot Dog the Movie, but they really have never panned out. Movies like Snowballing, Out Cold, Winter Break, Ski Patrol & Ski School have tried, but just don't have that je ne sais quoi.

In my opinion Hot Dog is the ski version of the movie Porky's, which the directors of this movie might have been following. There have been many movies since that have followed the same model, but I would state that it hasn't been replicated since American Pie.

It's funny, relevant for the time, raunchy, somewhat romantic, and a classic teen R rated comedy that will stand the ages so far.
続きを読む
2人のお客様がこれが役に立ったと考えています
レビュー を日本語に翻訳する

She watches it. She returns it.

She said, "Wow, there was a lot of hetrosexual sex in that movie!" LOL