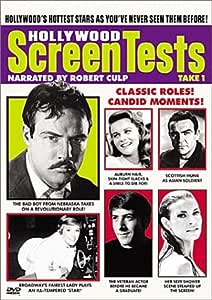 Robert A. Bowers
5つ星のうち4.0 Film History Lite: Interesting for more specialized movie buffs
2011年1月22日 - (Amazon.com)
Amazonで購入
If you are looking for casual, interesting, but not too demanding film history of a certain era, this documentary might interest you. It focuses very heavily on late 50's through late 60's, tests, mostly from the 20th Century Fox archives, but it is well put together and interesting for what it is. One drawback is many short glimpses of stars who are not actually covered in this video (Sean Connery, Jill St. John, etc.) are used repeatedly although the actual film clips they came from are not in this disc. I am presuming they are in the Volume 1 of this series. The Hello Dolly clips are very interesting as have been noted in other reviews. My favorites? The Rita Hayworth clips which show her as warm and very sweet as she assists the director in interviews with child actors. The Inger Stevens/James Drury tests for a role she did not win is also very interesting. All in all, it's a well put together, pleasant way to spend 90 minutes if this sort of documentary is interesting to you.
続きを読む
4人のお客様がこれが役に立ったと考えています
レビュー を日本語に翻訳する

warren
5つ星のうち5.0 so great
2018年9月20日 - (Amazon.com)
Amazonで購入
I loved every single minute. just the kind of stuff I love. the loved and the lost of Hollywood when there was a Hollywood. this is take two and I know there's enough material out there for a take three. bring it on !!!!!
続きを読む
レビュー を日本語に翻訳する

Matt Howe
5つ星のうち4.0 Good, Especially DOLLY Shots
2004年1月10日 - (Amazon.com)
Amazonで購入
This DVD is a good show, interesting to watch. Obviously, everyone will have different reasons for purchasing it. Some will look forward to seeing some screen tests over others.
I bought the DVD for the HELLO DOLLY screen tests and costume shots. I was amazed that this footage was not used on the newly released Fox DOLLY DVD! Extremely rare Streisand costume and wig tests and screen tests for the supporting roles are the highlight here. All of the DOLLY footage is in excellent condition. Danny Lockin's audition is very charming and it's obvious why director Gene Kelly chose him. You can even hear Kelly off screen reading with Lockin. Also interesting is Sandy Duncan's audition.

Matthew G. Sherwin
5つ星のうち4.0 fine retrospective of rarely seen Hollywood screen tests
2007年9月16日 - (Amazon.com)
形式: DVD
Hollywood Screen Tests, Take 1 does indeed give us a generous 90 minutes of rarely seen screen tests by actors both old and new to the Hollywood scene. The film moves along at a good pace and it held my attention rather well. Rather than being a straightforward documentary, the movie feels more like an ode to the screen test as a device to determine if the director had chosen exactly the actor or actress for whom they were searching.

The film displays countless screen tests with background stories about the meticulous process of choosing just the right actors using the screen test. Arranged in no particular order we get many screen tests from the late 1950s and early 1960s.

Of course, some screen tests and the stories that go with them are more memorable than others. People have noted that Mia Farrow "warbled" her way through "I Am Sixteen" as she tested for a role in The Sound Of Music--and they are right. Mia's vocal skills just didn't do the trick for the part even though she could sing fairly well. We also get quite a bit of information about the casting and testing for role in The Sound Of Music. Although we learn that the role of Maria was almost automatically given to Julie Andrews, we do get a rarely seen black and white screen test for Marni Nixon to be Maria. Marni was a wonderful female vocalist who dubbed other actresses' singing much more than she was ever seen on camera. The documentary also goes into depth about the painstaking global search for casting the children of the Von Trapp family for The Sound Of Music. Great!

Other very good insights come from watching a young Sean Connery testing for several roles including his part in "The Inn Of The Sixth Happiness" for which he was being considered as a military man who was half white and half Chinese. We also get extensive footage of a young Ann Margaret testing for State Fair and we see the introduction of a new kind of young woman on the Hollywood scene called "the $ex kitten." Look also for clips of Raquel Welch, Sharon Tate and Patty Duke for Valley Of The Dolls and Candace Bergen.

Amazon also correctly notes that there is a rather long segment for one of the few television series covered by this retrospective, Batman. We see Adam West's screen test alongside Lyle Waggoner's competing screen test which was necessary because the television network wanted at least two candidates for Batman. The screen test acrobatics for the young man who was to play the part of Robin interested me, too.

The DVD isn't exactly brimming over with extras but it did hold my attention so I can understand this. In actuality this film is a plethora of extras with each screen test being a mini saga in itself.

Overall, Hollywood film buffs will enjoy this film. It's neither deep not is it all revealing; but if you want to see rarely viewed screen tests this is it! I also recommend this film for the excellent commentary provided by director Robert Wise and performers including Adam West, Mitzi Gaynor, Marni Nixon and more.