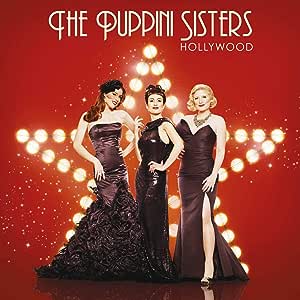 Hollywood is a gloriously evocative record that pays homage to the music of the silver screen in the Puppini Sisters' inimitably stylish manner that has been dazzling audiences worldwide since the release of their debut album, 2006's Betcha Bottom Dollar.

Their ability to renew and rejuvenate each song, effortlessly harmonizing vocal lines while staying true to the classic Tinseltown aesthetic, is evident throughout Hollywood, which was recorded in the old-fashioned way with the three ladies all standing round one microphone. The album takes in a whole range of dynamics, from the tongue-twisting "Moi Je Joue" and the high-energy upswing of "I Got Rhythm" - written by the Gershwin brothers - to a delicately fragile take on "Moon River" and Frank Sinatra's memorable "September Song." On each song, the sweetly charming vocal harmonies of the Puppinis bring new life to songs that have existed in the public consciousness for over half a century.

Introducing this richly arranged set of songs is the title track, penned by the trio themselves. Over a rumbling double bass and vibrant horns, "Hollywood" could quite easily fit into any film from cinema's Technicolor beginnings. A song about "the pursuit of getting your name in lights," "Hollywood" is a gateway into the deliriously exciting musical world the Puppini Sisters are exploring, yet is quintessentially the sound of the group themselves.

2011 release from the British vocal trio who specialize in 1940s-style close harmony vocal music. This album is dedicated to the music that made Hollywood sparkle Includes 'Moon River', 'I Got Rhythm', 'Get Happy' and more. Decca.

Mr. J. H. Wheeler
5つ星のうち4.0 These girls are great!
2014年4月27日に英国でレビュー済み
Amazonで購入
This is, and they are, singers having fun and showing they have good judgement in choosing what they record...I've not seen their act live, but their harmony, the recollection of Andrews Sisters sound, make me want to! This is a very good album and great background for a getting a party started...
続きを読む
違反を報告
レビュー を日本語に翻訳する

Mr G H Koren-Browne
5つ星のうち5.0 A CLASS ACT AND GREAT SINGING
2017年6月16日に英国でレビュー済み
Amazonで購入
Super great i saw these on Jonathan Creek and then researched why i did not know of this talented group!

Subsequently i have bought all the albums i could find!

Nannie Annie
5つ星のうち5.0 HOLLYWOOD ACCORDING TO PUPPINI
2012年4月17日に英国でレビュー済み
Amazonで購入
Some people may think not much can be added to vintage popular songs from the golden era of Hollywood but the talented Puppini Sisters bring a fresh approach to close harmony singing that gives these old tunes a new lease of life. My only criticism is that there are not enough of them. Fans of 30's and 40's groups the Boswells and the Andrews Sisters should enjoy this album.
続きを読む
違反を報告
レビュー を日本語に翻訳する

Barry Jorge
5つ星のうち5.0 Unique vocal harmony
2013年4月24日に英国でレビュー済み
Amazonで購入
Their vocal range and harmony is exquisite and renders slightly different edge to old classics that's mesmerising. It should appeal to all who have a warm love of classics with a different and unique rendition.
続きを読む
違反を報告
レビュー を日本語に翻訳する
すべてのレビューを参照します
Amazonプライム会員ならお急ぎ便、日時指定便が使い放題
さらに、映画もTV番組も見放題。200万曲が聴き放題 。クラウドに好きなだけ写真も保存可能。
> プライムを無料で試す