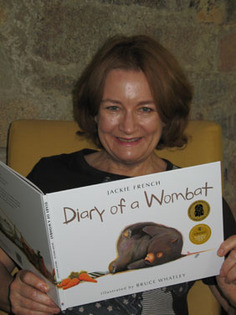 A story that will fascinate and involve all thoughtful young readers; it is a true original, beautifully told and impossible to put down – don’t miss it!
‘Wendy Cooling, Children’s Book Consultant’

This novel shows her at her best, challenging her young readers without distressing them, and bringing believable characters vividly to alive on the page… a joy to read. ‘Canberra Times’

An outstanding novel told through the power of a compelling storyteller .‘Reading Time’

Jackie French was born in Sydney in 1953, grew up in Brisbane, graduated from the University of Queensland and moved to her present home in NSW bush land in her mid twenties. Over the past 10 years she has published over a hundred books on diverse subjects ranging from children’s fiction to pest control!

Koneko
5つ星のうち5.0 Makes you think
2018年3月16日に英国でレビュー済み
Amazonで購入
This book follows a girl called Anna who makes up stories while her and some of the other school children wait for the bus. She tells a story about a girl who was hitler daughter (He didn't really have a daughter) and Mark starts to wonder questions like 'If I had a father like Hitler, would I be able to love him'

This book really gets you thinking and I think it has the potential to be an important read. I think any one of any age would enjoy this, even though it is a children's book, adults could ge something out of it.
Five stars
続きを読む
違反を報告
レビュー を日本語に翻訳する

Mr. J. Lewis
5つ星のうち4.0 Often forgotten aspect of war
2014年12月12日に英国でレビュー済み
Amazonで購入
Perhaps one of those aspects of the war that is little considered. This account by French, of Hitler's Daughter, is both interesting in terms of its perspective and also well written. Recommended.
続きを読む
1人のお客様がこれが役に立ったと考えています
違反を報告
レビュー を日本語に翻訳する