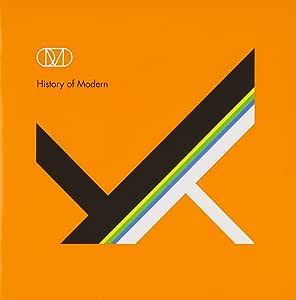 Orchestral Manoeuvres In The Dark released their new single 'If You Want It' in September 2010, the first to be taken from their new album History Of Modern. In tandem with the Depeche Mode and Pet Shop Boys, OMD's blend of cutting-edge synthwork, cool minimalism and soulful pop -- featured on classic albums like Architecture & Morality, Dazzle Ships and Organisation -- helped to define the '80s, sold millions of records, and turned childhood pals Andy McCluskey and Paul Humphreys into stars. History Of Modern is the band's first record since 1996's Universal. Andy McCluskey has described it as their "best album since Architecture and Morality "- high praise indeed. All artwork for the release has been designed by OMD's longtime cohort Peter Saville (of Factory Records fame). This autumn also sees OMD embark on the 'History of Modern' tour, with the classic line up of Andy McCluskey, Paul Humphreys, Martin Cooper and Malcolm Holmes.

5つ星のうち5.0 Wow this is really good!
2017年10月8日に英国でレビュー済み
Amazonで購入
Always having loved OMD I saw the new album was out The Punishment of Luxury so ordered it and thought hm missed History of Modern so ordered that as well. Absolutely OMD at their best much like the combination of lots of past albums i.e. Architecture and Morality, Pacific Age, Crush etc bits of previous albums come through. I've only listened once but all tracks stay in my memory! So far those that stand out are really all of them, which for me is a wow!! I'll see over repeated listens but this is classic OMD. You either love em or hate em so far love it! On reflection this is the best album OMD have ever done and so much better than Punishment etc. Every track brilliant- even my brother agrees!
続きを読む
1人のお客様がこれが役に立ったと考えています
違反を報告
レビュー を日本語に翻訳する

J. Ritchie
5つ星のうち5.0 History Repeats Itself
2012年7月11日に英国でレビュー済み
Amazonで購入
Having been a fan of OMD since 'Electricity' and 'Messages' I was disappointed with how they declined after 'Dazzle Ships'. Then there was a a long break and then they re-formed.

Re-formed bands rarely produce any worth listening too so I didn't buy this album immediately.

However, over time, this album got good reviews and, on the strength of this, I bought the album. I'm so glad I did. This is almost classic OMD and a great return to form.

If I was to characterise this album I'd say 'Organisation' meets 'Dreaming'. The sounds are more mainstream than early OMD, as are the lyrics, but there's an edge that cuts in some of the lyrics. There's a lot of catchy riffs, some haunting atmosphere, a track meant for a girl band, and a touch of the weird and wacky that OMD delight in confusing us with.

If you remember 'Souvenir', 'Enola Gay', and 'Joan of Arc', then this album won't disappoint.
続きを読む
3人のお客様がこれが役に立ったと考えています
違反を報告
レビュー を日本語に翻訳する

B. J. Morris
5つ星のうち4.0 new material is always welcome.
2011年1月30日に英国でレビュー済み
Amazonで購入
With omd back together we can see music going over a generation and is obvious at any omd concert. I do welome new omd music and thought the history of modern 1 and 2 really stood out for me. They may not be the hits or singles but sort of got me thinking yes this is the omd i know. Sister marie says is a single and really the whole history of modern project if thats what you may want to call it dosnt loose its omd sound. Do you know the experience of buying a new album from one of your favourite musicians and you put it on and you say 'eek is that really them.' You wont get that here. The dvd is not all that exciting but is a welcome freebee that contains studio work ,interviews and the words to the music as it plays sort of thing.
続きを読む
1人のお客様がこれが役に立ったと考えています
違反を報告
レビュー を日本語に翻訳する

Dangerous Dave
5つ星のうち5.0 Now, this is what I call OMD
2014年5月25日に英国でレビュー済み
Amazonで購入
An album which is varried enough to be interesting, while retaining the OMD electroic style. To my mind one of the outstanding albums to come from the OMD stable. Of course some tracks are going to be better than the others but in this case you do not mind because the weaker ones compliment the stronger ones (although may be best OMD to stay away from the 'Brittany Spears' style songs).
続きを読む
違反を報告
レビュー を日本語に翻訳する

david camm
5つ星のうち4.0 welcome back!
2015年2月28日に英国でレビュー済み
Amazonで購入
After a long wait for new OMD material, THIS was released, I bought a copy and was not disappointed, some very good tunes on, back to the classic omd, a welcome return to the pop scene, not as poppier as junk culture or dazzleships, some take a bit to get used to and sound like experimental songs, but they will grow on you worth adding to your collection
続きを読む
1人のお客様がこれが役に立ったと考えています
違反を報告
レビュー を日本語に翻訳する
すべてのレビューを参照します
Amazonプライム会員ならお急ぎ便、日時指定便が使い放題
さらに、映画もTV番組も見放題。200万曲が聴き放題 。クラウドに好きなだけ写真も保存可能。
> プライムを無料で試す