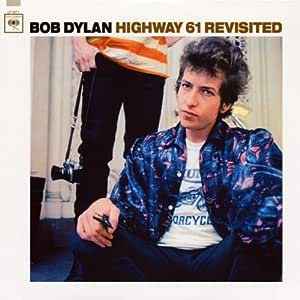 Highway 61 Revisited is a landmark -- recorded in 1965, during the same tumultuous summer that had seen him plugging in his electric guitar at the Newport Folk Festival, Highway 61 Revisited is Bob Dylan diving head-first into the rock and roll maelstrom, backed by the studio prowess of Al Kooper, Michael Bloomfield and others on such devastating classics as the epochal "Like A Rolling Stone." This Sundazed edition is an exact reproduction of the rare original 1965 mono album, featuring the original sleeve-notes and photos, and all-analog mastering from the absolute original source tapes.

Highway 61 Revisited is a landmark -- recorded in 1965, during the same tumultuous summer that had seen him plugging in his electric guitar at the Newport Folk Festival, Highway 61 Revisited is Bob Dylan diving head-first into the rock and roll maelstrom, backed by the studio prowess of Al Kooper, Michael Bloomfield and others on such devastating classics as the epochal "Like A Rolling Stone." This Sundazed edition is an exact reproduction of the rare original 1965 mono album, featuring the original sleeve-notes and photos, and all-analog mastering from the absolute original source tapes.

bob turnip
5つ星のうち5.0 2015 Vinyl Release - some info.
2015年11月26日に英国でレビュー済み
Amazonで購入
I cant fault the album itself. Just hope it helps someone to point out that the vinyl version of this, released on Nov 2015, is actually the MONO recording, 180g, on Legacy Vinyl label from Sony. Nice quality reproduction of original sleeve and record. But as I was hoping for the stereo pressing, I returned mine. It's a shame Amazon don't show any details about this release, and that they don't filter their reviews into different formats.
続きを読む
32人のお客様がこれが役に立ったと考えています
違反を報告
レビュー を日本語に翻訳する

Blew1
5つ星のうち5.0 An excellent, mostly acoustic guitar to listen to attentively or to chill to.
2019年8月28日に英国でレビュー済み
Amazonで購入
Bought this for my partner who is a pretty big, if casual, Bob Dylan fan. I wanted to get her an album on vinyl as opposed to a ‘Best Of’ or ‘Greatest Hits’ as I don’t think they translate as well to vinyl as ‘the listening to a whole album experience’ goes or should go anyway. I did a little research and Googling trying to find which is generally as the ‘best’ Dylan album, and this one tended to top or at least be in the top handful of most lists. That surprised me a bit as (as a fellow casual Dylan fan) I only recognised two songs (‘Like a Rolling Stone’ and ‘Desolation Row’) the others I had never heard of and was rather skeptical of this albums’ overall quality because of the lack of ‘hits’ thankfully, the other songs are great too. ‘Tombstone Blues’ especially stands out for me, but trust me when I say ALL the songs are great. This is a perfect, mostly acoustic guitar album you can stick in your vinyl player and either listen to attentively or have in the background as you relax.
続きを読む
2人のお客様がこれが役に立ったと考えています
違反を報告
レビュー を日本語に翻訳する

H.E Cox
5つ星のうち5.0 Not his best, but still a masterpeice.
2017年5月12日に英国でレビュー済み
Amazonで購入
Despite lacking the variety and sheer genius of Bring it All Back Home, Highway 61 is still a Masterpiece. It contains some of Dylan's most ambitious song-writing and it shows off his fiery attitude. I particularly love the imagery, humour and commentary on Just Like Tom Thumb’s Blues, the song is almost like a novel. Tombstone Blue’s of one of Dylan best rockers. Like a Rolling Stone is pure genius. Desolation Row is a beautiful and through provoking song that justifies it’s running time. I think its sad but incredible that the opening lines “They're selling postcards of the hanging.. the circus is in town” where inspired by lynching of three back men who where accused of raping a white woman in his home town Duluth.

I will say that It Takes a lot to Laugh , it Takes a Train to Cry and From a Buick 6 whilst not bad songs in there own right do feel like filler when compared to the incredibly high standard of the album. Also if you’re new to Dylan this maybe is not the best place to start as the length of some of the songs and the lack of catchy melodies may put some people off but I would still put in my top 5 Dylan Albums.
続きを読む
4人のお客様がこれが役に立ったと考えています
違反を報告
レビュー を日本語に翻訳する

Alan Burridge
5つ星のうち5.0 As Fresh As Yesterday.
2010年7月11日に英国でレビュー済み
Amazonで購入
Never a big Bob Dylan fan, suddenly I had an urge to own one of his 'Classic Albums.' But which one? I remember friends in the late 1960's waxing lyrical about Dylan and, if anyone, he was the first true rock god / icon as a solo star, with The Beatles being the band equivalent. But I stayed with Cream, The Who, and Jimi Hendrix, and have pretty much been a 'loud rock' freak ever since, with Motorhead being my life-long penchant.
But to scratch this itch or to satisfy this urge, I chose this album for the original version of 'Like A Rolling Stone,' which Jimi made his own on the Monterey Pop stage and the DVD. Just as poignant here with Bob's nasel whine singing those amazing lyrics, and strumming along as only he knows best. And it's his lyrics which everyone did and still do love; a very gifted singer / songwriter, and no serious rock CD collection should be without this diamond. Every track here has become a classic, and deserves the accolades they have earned over the years.
続きを読む
4人のお客様がこれが役に立ったと考えています
違反を報告
レビュー を日本語に翻訳する
すべてのレビューを参照します
トップへ戻る
Amazonについて
Amazonでビジネス
Amazonでのお支払い
ヘルプ＆ガイド
日本語ショッピングのための言語を選択します。 日本ショッピングのための国/地域を選択します。
© 1996-2020, Amazon.com, Inc. or its affiliates