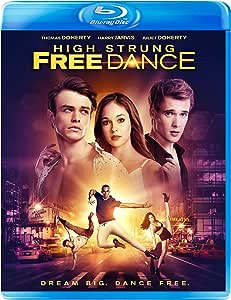 Ruth A. Hill
5つ星のうち5.0 Incredible follow-up from a dynamic filmmaking team
2020年2月14日 - (Amazon.com)
Amazonで購入
The first thing I wish to address is the term “sequel.” If you read my interview with the writer/director of the film, Michael Damian, then you will know that this was a question I asked him. When the term “sequel” is used, we tend to think that means that it is a continuing story, and if we haven’t seen the first movie, we may struggle to comprehend what is happening in subsequent movies. However, in this case, the sequel if more of a reference to the brand “High Strung.” While Jane Seymour’s character appears in both and acts as the connecting fiber between the two, audiences will have no problem understanding the story whether they watch the movies in order or out of order. With the exception of Jane’s character, Oksana, there are no other crossover characters.

Another concern people have when attending movies in this day and age is whether or not the movie is family-friendly and wholesome. The rating is PG, and I am here to state that there are no sexual situations, no nudity, and only one brief expletive. Now, let me address this candidly. While I still classify this movie as family-friendly and clean, the character played by Thomas Doherty does utter a term in frustration (BS) that is heard very often on cable TV but not permitted on network TV. I was not offended by the use of this word, and it fits his character implicitly. Compared to the vulgarity that appears on network TV and even other PG movies, this film is tame in that department, but I do want to alert anyone who may be offended by the use of this word.
If you have had the good fortune of enjoying the original High Strung movie, this second movie in the franchise will literally knock your socks off! Of course, this was the first movie of Michael and Janeen Damian’s that I have ever had the honor of viewing on the large screen in a movie theater, and the cinematography is absolutely flawless! (Now I need to have my teenage daughter see it too so that she can give her artistic stamp of approval on it, for she has a keen eye for cinematography that I do not.) I was blown away by the extensive variety of brilliant coloring, remarkable pageantry, and sensational shots I was viewing throughout the film. And I applaud Michael for heeding his wife’s suggestions when it came to filming the dancers, for I was mesmerized with every single dance. If the story had been lacking (which it wasn’t), I would have still given a glowing review for this film based on the incredible visual feast I was privileged to witness upon that screen.
In truth, I was expecting a story rather similar to the first one, and I would have been completely content had that been the case. However, the story of this film is much more expansive than the first. There is a character that will speak to each individual who is watching the film, no matter the age, sex, creed, nor ability. There are characters that will capture the hearts of the young and virile, and there are characters that will connect with the more elder members of society as well. I commend the movie for featuring women who were aged, and even one who was somewhat infirm and was possibly looking beyond her “golden years.”

In fact, I will state that the relationship that developed between Charlie and Rose stirred me to my core, and by the end, I was rather emotional over that sweet and endearing storyline. It is something that modern films often overlook as we are a society obsessed with young people. I am grateful for films like High Strung Free Dance that are not afraid to demonstrate that giving deference to the elders in our society can be beneficial to both parties involved. There is much that a young person can learn from someone older than they, and I was grateful to a young man like Charlie, who was willing to show such amazing care and deference to Rose without patronizing her.
Another feature of this movie I appreciated was the broad variance in dance and music styles. There was every kind of dance (practically) known to mankind from ballet to tap to jazz to contemporary and a glorious fusion of so many of them in glittering dance numbers that aroused my soul from deep within. The music was mostly modern in sound, but there were definite throwbacks to the classics. And even when a rap was featured, it was CLEAN! (I seriously wanted to stand up and cheer because I’m so over the viler rap music that young people typically blare from their car speakers and phones today!) I was quite smitten with the tap dance number, but the ending of this film was also an absolute dream! (I’ll get to that in a moment.)

One of the things that had me cheering almost from the inception of the film was the way the women involved in the chorus were so supportive of each other. In this entertainment business, especially, I have come to discover that the competitiveness of women is so vehement at times that there appears to be no room to support other females in the business. It is as though backbiting and bitter gossip is encouraged in order to get ahead. How refreshing to watch the other backup dancers cheer Barlow’s success and come alongside her when it appeared that the rug had been pulled out from under her without cause or notice. Even the catty Kayla was a bit subdued with her celebrity status, and when she went a bit too far, she found herself genuinely apologizing for her brash actions. I believe that women should support other women, no matter the industry, and I thank Michael and Janeen for making this a vital thread in the storyline of High Strung Free Dance.

I know I’ve barely mentioned the acting of any of the individuals. To be honest, the only actor I had seen previously was Jane Seymour, and as you can imagine, she was impeccable in her role of Oksana. (I mean, could she be any less than that?) It was charming to see Nigel Lythgoe pop into the film for a moment. Every single dancer and musician, whether featured or not, was exceptional in the extreme! I couldn’t think of a better cast to tell this story. As for the leading actors–Thomas Doherty, Juliet Doherty, Ace Bhatti, Harry Jarvis, Jorgen Makena, Kika Markham–could there be any better industry professionals to make such an overwhelmingly impressive, delightfully relatable, and totally inspiring film such as this?
One other thing I would like to address is the love triangle. Now, I won’t give away any spoilers in this review. I will admit that as I sat in the theater watching with rapt attention, I inwardly rolled my eyes and thought, “Oh no, here we go again. Another love triangle.” But I was puzzled as to how it would ultimately be solved. To be completely forthright, I wasn’t sure which young man Barlow should choose. And no matter which direction she went, how would that alter the overall trajectory and feel of the movie?
Speaking as a “romantic comedy expert” who has watched and reviewed hundreds of Hallmark (and the like) movies over the past few years, I have never witnessed such a clever solution to a potential love triangle. And the concluding number…oh my goodness! I was left with such chills that made me wish that there was at least one encore song and dance number! I mean, of course, the ending was the phenomenal climax to the entire film, and I was more than captivated! I had no choice but to give this film a standing ovation, and the next time I watch it (You can’t ONLY watch this movie once, after all!), I know I’ll be even more enraptured than I was at this first viewing. I cannot think of a thing that would make this movie any better than it was. Except for maybe a third sequel. And a fourth. And a fifth…and so on and so forth.

sometimesibuythings
5つ星のうち5.0 True art
2020年2月5日 - (Amazon.com)
Amazonで購入
I was absolutely blown away by this film. I was expecting it to be another young romance drama with little depth and lack luster choreography. Instead, I find a true masterpiece. The artistic beauty of the camera work, the chemistry between the actors, and more than all else, the emotional and magnificent dancing of Juliet Doherty. The performances are all so stirring and sophisticated that each and every one leaves you hanging on your next breath. A beautiful and surprising story that transcends its genre. This film is a true work of art and I highly recommend it to anyone who enjoys film and dance.
続きを読む
2人のお客様がこれが役に立ったと考えています
レビュー を日本語に翻訳する

RodW
5つ星のうち5.0 Exceptional Movie!
2020年2月9日 - (Amazon.com)
Amazonで購入
I loved the first HIGH STRUNG and feared that I would be disappointed by the second production bearing the moniker. High Strung FREE DANCE shares brilliant choreography (in multiple diverse styles), extraordinary dancing, compelling acting and inspiring music with its' predecessor; but it stands (and excels) on its' own. A must see movie!
続きを読む
1人のお客様がこれが役に立ったと考えています
レビュー を日本語に翻訳する

warren
5つ星のうち3.0 a 2.5 review
2020年2月7日 - (Amazon.com)
Amazonで購入
the fine dancer who directed, forgot what musical dance could be like as in the films that inspired him. these are young, talented dancers held back with very modernly edited flashing camera blips. very distracting to the eye and senses. this was television dancing. also, the script was not kind to the actors. the director did not remember the actors were human and actually had to connect to an audience.
続きを読む
レビュー を日本語に翻訳する

Amazon Customer
5つ星のうち5.0 Thomas Doherty brings it all together!
2020年2月17日 - (Amazon.com)
Amazonで購入
I have to admit the reason I purchased the movie was for my love and support for Thomas Doherty. I have waited years for this to finally come out. I expected this to be just another dance movie. It was NOT! This made me laugh and cry. The best I can describe it is... having so much heart and passion. You can feel that everyone on the cast and the artists behind the camera all loved this project. It was a project of love and art and a movie about love and heart. At the end of any good movie, dance, show, project, you want the audience to become a part of the art and to feel something after. Let me tell you I am overwhelmed with emotions and inspired.
続きを読む
レビュー を日本語に翻訳する
Amazon.comのカスタマーレビューを見る(9) 5つ星のうち4.7
Amazonプライム会員ならお急ぎ便、日時指定便が使い放題
さらに、映画もTV番組も見放題。200万曲が聴き放題 。クラウドに好きなだけ写真も保存可能。
> プライムを無料で試す