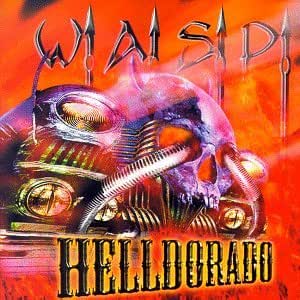 W.A.S.P.'s aging shock rockers reveal a little of their version of nostalgia on this album, but it's doubtful you'll get teary-eyed. Helldorado is an attempt to recapture the attitude and rawness that this cheesiest of metal bands started from in the 1980s, back to the period of their original demo tapes. Against a firestorm of basic three-chord metal, frontman Blackie Lawless continues to spit out bits of larynx as he muses on the eternal verities, from Saturday-night cockfights to faceless blowjobs ("Don't Cry (Just Suck)") and snorting coke. Framing the package is a series of goth-swathed broodings on self-destruction and hell that sound tame when shorn of the sicko theatricality of W.A.S.P.'s live stage shows. Certainly the return of guitarist Chris Holmes to the nest has livened up the spirits of the band, though. Sometimes there's even a change of key between songs. You won't be drowning out too many arty details by cranking this one up, especially Lawless's anthemic "Dirty Balls." --Tom May

Mr. H
5つ星のうち5.0 WASP Helldorado original 1999 cd
2013年1月5日にアメリカ合衆国でレビュー済み
Amazonで購入
I've loved this from the minute I hit play. This is Blackie & Chris getting back the to their roots. They've said they were getting inspiration for this album when listening to their original demo tapes from the first WASP album. It's an upbeat, heavy & raunchy album & with as many concept albums as WASP has done it's nice to hear them just rock out on this one. "Helldorado" & it's follow up "Unholy Terror" rank among the first 4 wasp studio albums in my opinion.
続きを読む
6人のお客様がこれが役に立ったと考えています
違反を報告
レビュー を日本語に翻訳する

George Antonio
5つ星のうち3.0 W.A.S.P. (Try to) Return to the 80's...
2007年7月4日にアメリカ合衆国でレビュー済み
Amazonで購入
Being the avid W.A.S.P. fan that I am; I recently purchased this album. As others have mentioned, this album is a bit different than previous releases in the sense that after such albums like Crimson Idol, Headless Children, and K.F.D., the band tries to return to their roots. Those roots being the awesome heavy-hitting head-banging hair metal of the 1980's! That being said, this is by no means a bad album, but seems to fall a bit short than what W.A.S.P. has become known for.

1. Drive By - An opening "skit" of sorts to begin this album which is the first time since "Electric Circus" they have done so. Even reminds me of an evil carney man trying to swindle people to play his carnival games. Overall, no substance means a worthless addition to an album. 1/5

2. Helldorado - This song brings the listener into the classic W.A.S.P. sound that we have grown to love. A song very remeniscent of something off "The Last Command." Catchy chorus and pretty cool guitar work make this one track that stands out over the rest of the album. 4.5/5

3. Don't Cry (Just Suck) - A typical "Animal" type song with less vulgarity. The overall beat of the song is good and the guitar work and solo is amazing; overall though this song lacks anything with real substance. Almost like the band is trying to hard to give it that raw 1980's raunchy feel. Falls short. 3/5

4. Damnation Angels - This is probably my favorite song on the album. Has a "Last Command" feel to it, but the lyrics have a bit of substance as well; much like "Headless Children." Again, catchy vocals with a guitar that harmonizes perfectly, and flawless drum work. Awesome song. 4.5/5

5. Dirty Balls - My least favorite song on the album. The beginning is funny, but again shows that the band was perhaps looking for anything to be shocking. Back in the day of their debut it would have been; not in this day and age. Pure rock song here with no substance, just an energetic song dedicated to the male anatomy! 3/5

6. High On The Flames - This song has a pretty cool riff to it. Seems like Blackie and the band are just having fun on this track which is what the entire album should have been like. Very similar to their debut album. Fun, rocking, and full of energy. 3.5/5

7. Cocaine Cowboys - This song is good for the heavy rock n' roll feel to it; but again comes across like a song put together on a whim. I like the concept around partying and just cutting loose, but after such darker and heavier albums, this seems to falter. Once again however, the guitar work is awesome! 3/5

8. Can't Die Tonight - There is so much going on within this song that there is no hope in focusing on one particular element. A raw, heavy track full of energy but no direction. The quality of this song is perhaps the poorest I have ever heard in a W.A.S.P. song. The guitar solo, while cool, is basic at best. 2.5/5

9. Saturday Night Cockfight - A song that has a nice beat to it, but again seems to be a victim of poor planning and rushed production. I wish the band would have spent more time on this song because it may have had something. Strong vocals and an awesome guitar solo save this song from what would be almost pure disaster. 3/5

10. Hot Rods To Hell (Helldorado Reprise) - As W.A.S.P. have become known for their reproses on songs appearing earlier on an album, we are treated to a Reprise of the second track. Not bad, but it makes me think that Blackie knew he had a pretty bad album here and just threw something together to attempt to hold the fans interest/over. Like I said, not a bad song, but I would have much rather had another completely different song. 3.5/5

Coming off the heels of their exprimental album K.F.D. The band seems to have lost some major steam. As I said I am a huge W.A.S.P. fan, but this album is not up to even their standards which makes me wonder why they would think their fans would be. I am glad thier later releases faired better, and that this was just merely a bump in the road.

I do applaud their effort to return to the raw energy, rock n' roll debauchery feel of the 1980's; but as I've mentioned it almost feels like they tried to hard. They wanted to show the fans that they could still be wild and crazy rockers, well when you try to hard to do so, it comes across as forced and thus fake.

I do recommend this album for collectors of W.A.S.P. as it will help complete your collection. Other than that, for a new listener, go find some of their better stuff. "Crimson Idol" and even "K.F.D."