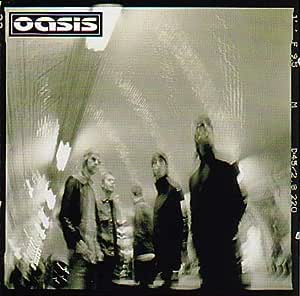 4. Stop Crying Your Heart Out,

10. Born On A Different Cloud,

1.The Hindu Times
4.Stop Crying Your Heart Out
6.Little By Little

Charlie Forrest
5つ星のうち4.0 Great purchase, but not without it's problems
2018年1月21日に英国でレビュー済み
Amazonで購入
In this review I'll talk about the condition of the vinyl, the postage, and the songs on the album.

Condition: 3/5. (For this part I'll include pictures). The back of the sleeve isn't the best, there's a crease in the bottom left corner, and a load of very light scratches all over. The top corner where the sleeve folds looks a bit dodgy, but it's not really a problem, just a nitpick. The rim of the second vinyl is a bit rough, as if it had been knocked against a sharp edge or something, but once again this a nitpick. On side B of the first vinyl there is scratch of about 4cm in length, but when played the sound is still perfect.

Contents of the vinyl: 4.5/5. I won't show pictures for this as I personally like to not know what is inside double sleeved vinyls before buying them myself. The main picture when you open up the vinyl sleeve is pretty nice, but the main surprise was a booklet containing 13 pages of stunning photography of the group during the time of recording, which I loved having a look through. The pictures on the sleeves of the vinyls are also very nice. I was really pleased with that. Only downside is the speed, which is 45 rpm. All my other vinyls of this size are 33 rpm, so when I started playing it the sound was slow. After a minute of thinking I'd been given a faulty vinyl, I realised it was at a different speed. Not too much of a problem, I just thought it was a bit odd. Partly at fault on my side for not noticing the speed given in the centre of the vinyl.

Songs: 4/5. I've heard many people, Liam Gallagher included, say this is Oasis' worst album, but for me this is one of my favourites. Side two contains three flawless songs: Stop Crying Your Heart Out, Songbird, and Little By Little. Ever since I heard the lyrics "True perfection always stays imperfect" from Noel's 'Little By Little' I've been saying it in my head every day. Such a good line. I'd say 5 out of the 11 songs are amazing, the rest range from good to awful.

Overall I have mixed feeling about this purchase. I definitely don't regret it, but it could have been better. Hope this review was helpful to anyone!
続きを読む

Callum Gilholm
5つ星のうち3.0 Oasis sounding great!
2018年4月4日に英国でレビュー済み
Amazonで購入
The vinyl it's self is epic, 45rpm oasis sounds amazing.... Problem is there's a few crackles and pops.... New stylus was used so the record was not made in a dust free environment. To add to this, seems to be the 2009 reissue not the 2016 remasters. The sleeve came in terrible condition however record is great, ignore the pops and sounds fantastic!
続きを読む
1人のお客様がこれが役に立ったと考えています
役に立った
フィードバックを送信中...
フィードバックをお寄せいただきありがとうございます。
申し訳ありませんが、お客様の投票の記録に失敗しました。もう一度試してください。
違反を報告
レビュー を日本語に翻訳する

Tabitha
5つ星のうち5.0 Brilliant album
2014年2月12日に英国でレビュー済み
Amazonで購入
Judging by other reviews, this album seems to be rather underrated. As a big fan of Oasis I must say I believe this to be one of their best albums. With classics on it such as "Stop Crying Your Heart Out." and "She Is Love." what is not to like? If you liked the album (What's the Story) Morning Glory? you'll like this one as well most likely.
続きを読む
役に立った
フィードバックを送信中...
フィードバックをお寄せいただきありがとうございます。
申し訳ありませんが、お客様の投票の記録に失敗しました。もう一度試してください。
違反を報告
レビュー を日本語に翻訳する

B-D79
5つ星のうち4.0 Heathen Chemistry proves a better formula
2002年7月10日に英国でレビュー済み
Amazonで購入
Oasis Mark II, we are told. Noel has fewer songwriting pressures, and this clearly a good thing, as the 6 songs he contributes are some of the best he has written since "(What's the Story..)". I knew Andy Bell and Gem Archer would produce some good stuff ("A Quick Peep" and "Hung In A Bad Place" respectively), but how would it affect the balance of the album? Actually, it works very well, but the real surprise is just how good Liam's songs are; "Songbird" has a really summer-y, folky feel, "Born On A Different Cloud" is pure Lennon, and "Better Man" appeals purely because of the sense of honesty in the lyrics. Who would have thought him capable after the awful "Little James"?
I suppose the best compliment I could pay this album is that I can't figure out which song will be the next single - they are all good enough, and would justify serious air-time on the radio (except "A Quick Peep", the instrumental which few people seem to like - I do, for the record). I would probably bet on "Songbird", because I think it's the best thing Liam has done, and deserves to be a single.
So, is this the sound of Oasis MkII? Slightly folkier, less Beatles-y, more Stone Roses? Not likely - Andy, Gem and Noel are likely to bring things back towards a more ballistic type of rock album. "Definitely Maybe" this ain't, but this is again a good thing - there is no point in going back, better to push forward, and let the sound evolve.
The only complaint I have is that the album is a little on the short side - surely another track could have been included (how was "Idler's Dream" omitted?). But I think they are still reacting on some level against the criticism received for "Be Here Now" - songs too long, over-produced and too many (which I don't really agree with), and are trying to keep things as brief as possible. A plus is we finally get a hidden bonus track, although it is half an hour after the last titled song. I like it - another instrumental, although I don't know what it is called. Sort of a chillout track, and if anyone can find out what it is called, it would satisfy my curiosity.
I know I only gave the album 4 stars - but that is purely because I do think that the album is a little too short, and there isn't enough of Gem on there (I'm a Heavy Stereo fan). But it is a very good album, it definitely grows on you, and stands up to repeated listens. Unlike SOTSOG and BHN, this one will stand the test of time quite well.
続きを読む
1人のお客様がこれが役に立ったと考えています
役に立った
フィードバックを送信中...
フィードバックをお寄せいただきありがとうございます。
申し訳ありませんが、お客様の投票の記録に失敗しました。もう一度試してください。
違反を報告
レビュー を日本語に翻訳する

Lauren n.
5つ星のうち3.0 Great delivery but damaged
2020年3月26日に英国でレビュー済み
Amazonで購入
Delivery was so quick and easy but when we opened it and used it for the first time it had a scratch running through it and now we can’t use it which is gutting as it was a gift
続きを読む
役に立った
フィードバックを送信中...
フィードバックをお寄せいただきありがとうございます。
申し訳ありませんが、お客様の投票の記録に失敗しました。もう一度試してください。
違反を報告
レビュー を日本語に翻訳する

Mr. A. M. Bayliss
5つ星のうち4.0 The brother G are back on form
2002年7月2日に英国でレビュー済み
Amazonで購入
After the disappointment of Standing on the Shoulder of Giants and the over production of Be Here Now, Heathen Chemistry sees the lads playing good honest rock and roll and all the better for it! One of the big differences on this album is that Noel, although still the main songwriter, isn't the only contributer. It seems that now they can pick the best songs that they've all written instead of relying on Noel to write 2 or 3 great songs and finding some other tunes just to fill the album. Hung in a bad place, a song that wouldn't sound out of place on Definatley Maybe, was written by Gem, and Andy Bell contributes the instrumental, A quick peep. But probably the biggest suprise of the album is that not only has Liam contributed 3 songs, there actually very good! Songbird is a great track, a 2 minute Beatlesque ditty in which his voice is the closest to John Lennon's that I've ever heard it, and in my view, he also contributes the best track on the album in Better Man. That's not to say Noels songs are poor, on the contary, this is some of the best stuff he's ever written, especially the haunting Stop Crying your Heart out. His guitar playing seems to have improved too. Theres some great solos on this album and although he'll never be up there with Hendrix and May, he can still wield a mean axe when the time calls for it!
Another good thing about the album is the band itself. With Gem and Andy Bell on board, Oasis sound like the band they've always threatened to be, musically tight and instumently interesting.It makes you wonder what their first 3 albums would have sounded like with this line up.
On the whole a very good album. Everything seems to be falling into place for Oasis and I for one am glad to see and hear it!
続きを読む
2人のお客様がこれが役に立ったと考えています
役に立った
フィードバックを送信中...
フィードバックをお寄せいただきありがとうございます。
申し訳ありませんが、お客様の投票の記録に失敗しました。もう一度試してください。
違反を報告
レビュー を日本語に翻訳する