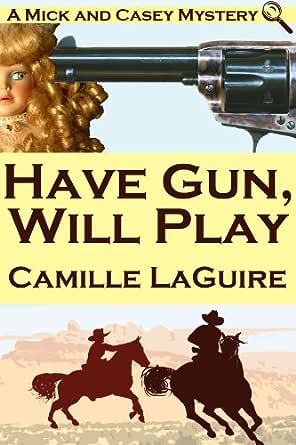 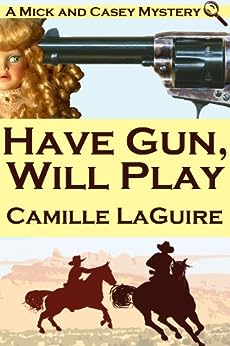 Have Gun, Will Play (A Mick and Casey Mystery) (English Edition) Kindle版

J H Sked
5つ星のうち4.0 Great little western with a twist
2011年6月26日に英国でレビュー済み
Amazonで購入
I enjoyed this; I'd forgotten how much fun westerns can be.

I can't go into too much detail for fear of plot spoilers, but Mick is the kind of guy you want to see more of: accident-prone, subject to severe moments of foot-in-mouth syndrome, but a decent guy with a giant heart.

Casey is both brittle and strong, and I love the idea of a female gunslinger.

Together they have to solve a crime within a crime; so we have a nice little detective story without the modern day forensics. Much as I love those, it's just as much fun to figure out the whydunnit (the whodunnit is pretty obvious) with fingerprints, DNA and other technology.

I'd love to see more of this couple; I've blazed through Scattershot Gulch and the short story collection already.

I pride myself on being someone who will read - and enjoy - anything that comes my way. So when "Have Gun, Will Play" came up on my TBR list, I was struck by the awareness that, outside the Lone Ranger adventures my mother would read to me as a wee lad, I have never read a western. Ever. Not that I've been actively avoiding them - "Blood Meridian" has intrigued me, given my adoration of Cormac McCarthy - they just haven't come my way, and I haven't searched them out. Consider westerns my "lost genre".

So into my realm of personal unawareness comes this quaint and fun little book by Camille LaGuire. "Have Gun, Will Play" is the story of Mick and Casey, a pair of young gunslingers traipsing through the old west after having severed ties with a famous lawman. They come upon the small ramshackle mining town of Newton and are immediately thrust into a gunfight with invading outlaws. In the aftermath of this conflict, they meet up with a banker named Montel Addley, whose brother is a paranoid land owner who basically runs the town and its surrounding area. Mick and Casey are hired to usher the more important Addley's daughter, Laurie, and her aunt Clara, to a safe haven, far away from the range war that is being waged.

Along the way there are numerous betrayals, schemes, a couple kidnappings, and a mysterious bag of toys. The story is told through Mick's eyes, and we are held in mystery as to what's going on because Mick, in his own adorable and earnest way, is a bit clueless. The tale twists and turns and captures the reader's imagination by never lingering too long on any single plot point. This is done pretty expertly, and with Mick being such an endearing character, we don't mind looking at the world through his point of view. In fact, there are many instances of comedy that come about simply through his tendency towards self abasement.

The background information of both Mick and Casey is a slow development. When we meet them at the beginning, they are simply thrown into our laps. Their history is presented to us in a slow trickle throughout the novel, so much so that even in the last paragraph we are given tidbits that let us greater understand their character. This was skillfully executed, and flaunts the author's impressive mastery of character development.

It is within these characters that some of the more interesting aspects of the novel are uncovered. Along with the mystery and intrigue of the plot, this same mystery and intrigue surrounds them, as well...especially Casey. She is portrayed as a precocious yet troubled young (VERY young - it's in question whether she is even 17 years old, which to us modern-day Americans is a bit disturbing) girl who married Mick the day they met. She is grumpy and damaged, a scowling mess of a young woman, who, despite the hardships of her past, is not yet jaded enough to turn her back on the world or the people who inhabit it. In many ways, despite her rough exterior, she is still an innocent. She struggles with the mores of right and wrong. She wants compassion and love yet often rejects it. She'll act the mature lady one moment and the young girl she is the next - which completely fits with a girl her age. She constantly questions the motives of others, and even her own, and it isn't until she meets a like soul in the character of Laurie that she starts to lower her walls and come out of her shell.

The whole of the novel kept this reviewer captivated throughout, and it is a really fun read. The structure is sound, the characters are sufficiently likeable (and contemptible), and there is enough action to keep me feeling eager to turn the page. It really is very good, and despite my earlier stated lack of knowledge of the genre, I found myself not thinking at all about the setting. It felt as if these dilapidated towns, dusty settings, and men and women on horseback were the most natural things in the world. That, in itself, is an accomplishment.

Every part of me wanted to give this book a four-star rating. Initially, that's what I'd placed in the header. However, after going back and reviewing what I'd written, I realized that I can't justify knocking off a star. There is really nothing wrong with the book. It's highly entertaining and a nice little mystery. Add to that the fact it kept me intrigued and entertained, and I realized that the urge came about simply because I feel I've given too many books that ultimate honor...and it's time I understood there is no shame in that. I've been lucky, and I've chosen well when picking books to review.

This book is just another one of those good choices. It gets a hearty recommendation from me.
続きを読む
7人のお客様がこれが役に立ったと考えています
違反を報告
レビュー を日本語に翻訳する

Eric C. Welch
5つ星のうち5.0 Lots of fun
2012年7月18日にアメリカ合衆国でレビュー済み
Amazonで購入
This is an example of stumbling across an author in an entirely different setting, checking her out, and for purely non-literary reasons picking up one of her books.

I'm glad I did, for this book was a charming read. It's about a young married couple of gunslingers (certainly a unique premise) that had been mentored by a famous lawman and who now offered their services - to the good guys. The relationship between Mick and Casey is marvelous.

"I think she was seventeen. She wouldn't tell me her birthday, but she'd said she was sixteen a year ago, when we'd met. And she looked younger, even with all the gear she wore: a little hazel-eyed girl with a dark braid, wearing two silver pistols on a big silver gunbelt, and a big hat and spurs. Me, I was twenty, and looked maybe a little older, which was fortunate because nobody wanted to hire a pair of kids as gunslingers. And no outlaw was ready to respect a kid as a bounty hunter. At least not until Casey had put a couple of holes in his hat. She was good at that. A regular sharpshooter. . . .Case and me do things kind of backwards sometimes. First we got married, then we introduced ourselves, then we commenced to fighting, then we had the honeymoon, and now we're courting."

They have been hired to accompany a young woman on a journey as her protectors (of her body and the large collection of toys she has.) Needless to say numerous adventures result and Mick and Casey are left holding the bag, so to speak. I won't recount the plot as I'd have to stamp "spoiler" all over this note.

L.C. Evans
5つ星のうち5.0 Captivating Characters
2010年11月30日にアメリカ合衆国でレビュー済み
Amazonで購入
I loved this entertaining and well-written book. This is not a typical western where a lone hero rides into town and saves a rancher's daughter from someone who's trying to steal water rights. Have Gun, Will Play features a pair of unlikely guns for hire. There's a mystery plot involving stolen jewels and the kidnapping of a little girl. Mick and Casey, the gunslingers, are a young married couple. The story is told from Mick's point of view. Though Mick is young and naive, he's actually a lot shrewder that he likes to let on. The criminals underestimate him and this eventually leads to their downfall. Mick makes mistakes along the way, but he doesn't give up. Even after he figures out that they are not going to be paid for their services, he reminds himself and Casey that they are working for the little girl and they will not let her down. Casey--as seen through Mick's eyes--is tough, a great shot, and not someone you cross. Mick is sweet and prides himself on being honest. He does what has to be done.

The plot had enough twists and turns to keep me guessing, and the fast pace kept me turning pages. Vivid details brought the setting to life. I especially like that their horses had names and personalities. My only complaint about the book is that there wasn't enough background about Mick and Casey. For example, Mick said they met and married on the same day, but that fact was never explained, nor do we find out why they are gunslingers. I came away with the impression that this book was the second of a series.

kindle addict
5つ星のうち4.0 Fun, engaging, easy read.....
2010年11月19日にアメリカ合衆国でレビュー済み
Amazonで購入
I read mysteries but not usually westerns, so this was very different for me. The book was really enjoyable. The plot was interesting and witty with a lot of action and some humor; the main characters, Mick and Casey, were very likeable. Like another reviewer, I had trouble believing they were so young at first but then got used to it and just accepted it. It took a while to get an understanding of this young married couple because their development is rather slow. But they keep developing right up until the end of the book, which is good, especially if this is the first in a series. The story just seamlessly flowed which is a credit to the author. There was a lot of shooting and many deaths, yet overall the book was a light, fun read and keeps the reader engaged. I think the combination of mystery and western is intriguing and was well done by Ms. LaGuire. I will definitely read the next in this series once it is released.
続きを読む
違反を報告
レビュー を日本語に翻訳する
すべてのレビューを参照します
click to open popover
Amazonプライム会員ならお急ぎ便、日時指定便が使い放題
さらに、映画もTV番組も見放題。200万曲が聴き放題 。クラウドに好きなだけ写真も保存可能。
> プライムを無料で試す