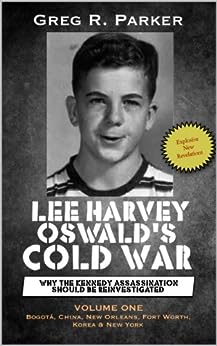 Borders Lynn
5つ星のうち3.0 Fascinating network hinting at grooming of patsies from childhood for uses in future covert activities by the CIA.
2016年9月6日に英国でレビュー済み
Amazonで購入
This has implications for social engineering with perverse intent. This practice may not have been extinguished but is worthy of further investigation linked to less famous crimes than the murder of JFK.
続きを読む
違反を報告
レビュー を日本語に翻訳する

Kindle Customer AJLast
5つ星のうち1.0 Crap
2018年10月8日に英国でレビュー済み
Amazonで購入
Waste of my money and time reading this book. Had nothing to do with events in Dallas and used the cover photo of Oswald just to sell book.
続きを読む
2人のお客様がこれが役に立ったと考えています
違反を報告
レビュー を日本語に翻訳する

An Fear Foighneach
5つ星のうち5.0 Unspinning the Oswald yarn
2015年1月6日に英国でレビュー済み
Amazonで購入
Napoleon once reportedly said, `If you want me to understand a man, tell me what the world was like when he was twenty'. This is probably more true of Lee Harvey Oswald than of most, given his relatively unsheltered and unstable home life during his childhood and adolescence.

Lee's father died two months before he was born. That loss was exacerbated by his mother Marguerite's apparent lack of concern - or perhaps capacity - for stability and continuity. By the age of 17 Lee had resided at 22 different locations and attended 12 different schools, including the notorious Youth House reformatory type institution in New York City.

In these circumstances, Lee was more than usually exposed to the prevailing cultural and political conditions of the time and these were defined by above all else the Cold War. It is appropriate then that Greg Parker's approach in attempting to decipher the enigma that is Lee Harvey Oswald is largely concerned with describing how Lee's world, in every sense of that word, was defined by the Cold War.

The cannon fodder for war has always been supplied mainly by poor young men and the Oswald family contributed greatly in that regard to the US Cold War machine. All three of Marguerite Oswald's sons joined the lower ranks of the military. The premise of Greg Parker's book is that not only did Lee become a foot soldier in the conventional sense as a Marine but that he also became a psychological warfare foot soldier. This is a well founded premise that passes the duck test with flying colours.

The book is divided into three parts. Part 1 deals with the assassination of Colombian Liberal Party leader Jorge Gaitan on 9th April 1948 and the background to this in terms of US interference in Colombian politics on behalf of US business interests such as those of the infamous United Fruit company and its engineering the secession of Panama from Colombia in 1903. As the book shows, the assassination of Gaitan `provides a precedent case for the later assassination of the Kennedy brothers'.

The Wall Street law firm Sullivan & Cromwell played an important part in these strategems, representing among other major parties United Fruit and the New Panama Canal Company. As Stephen Kinzer wrote in his book The Brothers, `Sullivan & Cromwell thrived at the point where Washington politics intersected with global business.' (page 19) The brothers in question are Foster and Allen Dulles both of whom acquired considerable wealth as overpaid Sullivan & Cromwell lawyers who later became privileged champions of the US National Security State during the Cold War in their capacities, among others, of Secretary of State and Director of the CIA respectively.

As for the United Fruit Company, the great Chilean poet Pablo Neruda eloquently described its contribution to western civilisation as follows:

When the trumpet sounded, everything
on earth was prepared
and Jehovah distributed the world
to Coca Cola Inc., Anaconda,
Ford Motors and other entities:
The Fruit Company Inc.
reserved the juiciest for itself,
the central coast of my land,
the sweet waist of America.
It re-baptized the lands
"Banana Republics"...

Part 2 of Greg Parker's book, titled `Total Control: 1919-1952', deals with developments in biological and psychological warfare and their use in the Korean War. It also deals with the marriage of Oswald's mother Marguerite to Edwin Ekdahl in May 1945, their divorce in March 1948 and Ekdahl's `state security' connections.

Part 3 of the book titled `Down and Out in NYC: 1952-54' deals with the time spent by Oswald and his mother in New York during his early teenage years. The scope of this part of the book is indicated as follows:

'[New York] is where his "legend" as troubled loner turned on to Marxism begins to take shape, at times crystalizing around the ingredients he offers to the mix; at other times filling in the blanks of his history deliberately omitted from the records. This is the beginnings of the legend that would carry him to the Soviet Union.

'Included in Part 3 are background details on the New York School Board, Youth House and John Pic. Young Lee was not just building a legend. In all likelihood at the tender age of 13, he was also commencing his career as informant/ provocateur.'

During the young Oswald's sojourn in New York he was for at least some of that time under the wing of his older half-brother John Pic who had enlisted in the Coast Guard in January 1950. John Pic was stationed at some very interesting places during this period. For instance, from January to April 1952 he was stationed at US Naval Training Station, Bainbridge, Maryland. The following passage is one of many fascinating passages in the book that shed light on some of the dark corners of US Cold War machinations:

'Such outbreaks continued after the war, but acute poststreptococcal received little attention from the commission until an epidemic occurred at Bainbridge Naval Training Center during 1951 and 1952. Rammelkamp and his team investigated this epidemic...On site for the epidemic, along with Pic and Ramnelkamp were bacteriologists from the US Army's biological warfare center at Fort Detrick. Group A streptococcus was of interest to the Detrick scientists as a possible biological weapon.

'Included in the institutions investigated by the Clinton era Advisory Committee on Human Radiation Experiments was Willowbrook State School on Staten Island ( [113] ). Between 1956 and 1972, intellectually impaired children were injected with hepatitis in order to study the progress of the disease . The experiments had been sponsored by the New York School of Medicine and the AFEB. The AFEB obviously had no qualms about medical experiments on unwitting human guinea pigs.'

From February to September 1953 John Pic was stationed at the US Coast Guard Port Security Unit, Ellis Island, New York, which collaborated with the FBI and the ONI and their networks of informants in eliminating suspected communists among merchant seamen and waterfront workers. The Navy has since admitted that many victims of these purges were innocent.

There was a similar witch hunt for suspected communists among New York teachers presided over by Superintendant of Schools William Jansen, who had a similar background in Nordic Lutheranism and related activities to Edwin Ekdahl. It seems likely that they knew each other and that that is how Lee came to be enrolled in the out of area Trinity Evangelical Lutheran School in September 1952.

The prevailing paranoia extended to drug taking among students to the extent that in April 1951 New York State Attorney Nathaniel Goldstein called for student vigilante squads to patrol school hallways. The author notes that `...the school system ran on paranoia spurred on by a culture of informing of others...Teachers were blackmailed into informing on each other. Some school kids even wrote letters informing on teachers.'

Against this background, Lee's truancy and overtly unpatriotic behaviour seem to be treated with an unlikely leniency that prefigures the similar leniency he was afforded later in relation to his apparent treason in Moscow. In April 1953 he was remanded to Youth House for psychiatric assessment, where again he enjoyed unusually favourable treatment by the staff and his fellow inmates.

There is also the problem of the self contradictory Warren Commission testimony of the chief Youth House psychiatrist Dr Renatus Hartogs. When presented by assistant counsel Wesley Liebeler with a copy of his psychiatric report on Oswald, Hartogs had to admit that contrary to what he had claimed there was no mention in the report of the words `incipient schizophrenic' or `potentially dangerous'. The evidence suggests that there were two reports and Greg Parker explores some interesting questions in this regard.

The book succeeds admirably in the extremely difficult task of discerning through a deliberately darkened glass a clandestine underworld of Cold War psychological warfare on the home front, the world through which LH Oswald moved during some of his most formative years. By astutely observing patterns, correspondences and connections on the one hand and chinks and discrepancies in the official legend on the other, the author makes sense of an otherwise impenetrable miasma of myth, disinformation and propaganda that shrouds the true story of Lee Harvey Oswald.