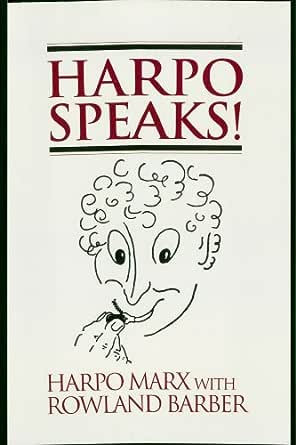 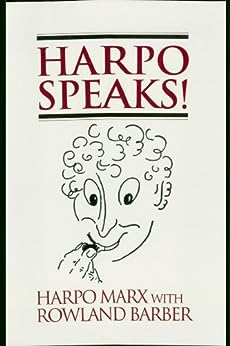 To Marx Brothers fans who have yet to read this book: Put it off as long as you can, because once you are finished, you will wish you could read it again for the first time. Harpo's life was interesting in itself, but it also frequently intersected with the lives of other fascinating people, most notably his own brothers and drama critic Alexander Woolcott. Marx also was part of the legendary Algonquin Round Table; he's got plenty to say about that. Wait'll you hear about what it means to "throw a Gookie." You'll never be able to watch a Marx Brothers movie again without looking for the Gookie!
--このテキストは、kindle_edition版に関連付けられています。

Jippu
5つ星のうち5.0 Harpo doesn t speak!
2013年6月16日に英国でレビュー済み
Amazonで購入
I happened to hear a reading of this book in the radio, one chapter at a time. So I missed many chapters and became curios of the rest. It was really fun listening to it, but reading was as good. And it is really wrong to put as title that Harpo speaks when you don't hear his voice (according to himself, high pitched and nervous) when it is a book! But maybe he has taped the stuff and Rowland Barber has written it. There are so many funny stories that even if only half of them are true, the book has lots of historic value. Like the trip to the Soviet Union as the first US performer after renewal of the diplomatic relations in the 30's. Of course it is obvious that Harpo is not a very deep intellectual or observer and his life after the success of the Marx brothers consisted mainly of having fun (like playing crocket which in the thirties was a serious upper class sport, in par with golf. Pity golf did not become children's game also!)
The childhood of Harpo was not very fun but he makes it sound like it was, the years of misery as unknown artists are fun to read about but surely not fun, and the life as a celebrity (who happily was unrecognizable when normally dressed and without the wig) was fun but not really very serious. Lots of games, drinking and cigars which changed into a somewhat more serious family life when Harpo married and adopted lots of children. But had a golden heart and nice character and does not really have a bad word to say of anybody. Interestingly the brothers kept even together pretty well and did not much quarrel although they were very different. Even Karl Marx is mentioned positively although a possible relatedness is not mentioned (both came from the same part of Germany...). There is an interesting piece of news that the Marx square in New York does not come from Karl but from Harpo's uncle who was a crony of the city hall gang.
続きを読む
3人のお客様がこれが役に立ったと考えています
違反を報告
レビュー を日本語に翻訳する

laurie chapman
5つ星のうち5.0 A great one for Harpo fans.
2019年2月9日に英国でレビュー済み
Amazonで購入
Written well, this is a kind of rags to riches story. Not sure I believe all of his tales but well worth reading. I am old enough to remember Marx brothers films and Harpo was my favourite brother. You do get the essence of the man.
続きを読む
1人のお客様がこれが役に立ったと考えています
違反を報告
レビュー を日本語に翻訳する

Phredd
5つ星のうち5.0 Marxist
2011年11月9日に英国でレビュー済み
Amazonで購入
As an avid, long-time Marx Brothers fan, I read this book many years ago, and would have re-read it many times since if I hadn't loaned it to a colleague who didn't return it.

Harpo describes his life and the characters he has met along the way (particularly his family) with great wit and wry humour. The word-pictures he paints are so vivid, you could almost be there, living it yourself.

I recently purchased two more copies of Harpo Speaks, one for myself and one for my daughter (another fan) who lives abroad. If you are a Marx fan (and even if you aren't), do read it yourself, I'm sure you'd love it too.
続きを読む
4人のお客様がこれが役に立ったと考えています
違反を報告
レビュー を日本語に翻訳する

Mal. Wilson
5つ星のうち5.0 A fantastic book
2018年8月12日に英国でレビュー済み
Amazonで購入
There is nothing to dislike about this book and considering it has been constantly reprinted since it first came out speaks volumes for the author and the high regard he was held in
続きを読む
違反を報告
レビュー を日本語に翻訳する