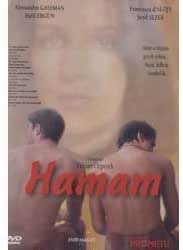 Tired of his troubled marriage and his profession, an overly tense Italian businessman's life changes dramatically after he learns that an aunt has left him property in Istanbul. Francesco Alessandro Gassman(the son of internationally renowned actor Vittorio Gassman) arrives to the Turkish city hoping that he can take care of the matter swiftly and return to Italy. He is surprised to discover that the property is actually one of the last traditional hamams (old-fashioned bath houses) in Turkey. The lawyer in charge of the inheritance seems to dawdle and this frustrates Francesco who is not used to the slow pace of the neighborhood where the bath is located. But then the family that has been running the Turkish bath for his aunt, takes him in and Francesco gradually rediscovers a long-missing sense of family as he accustoms himself to Turkish culture. Matters become complicated though when the couple's daughter Fusun falls for Francesco, who discovers himself increasingly and disconcertingly interested in her darkly handsome brother Mehmet. The Italian decides to remain in Istanbul for a while to help restore the baths. The situation comes to a head when Francesco's wife arrives to make an announcement. The ensuing conflicts cause Francesco great upheaval, but they also lead him to grow in unexpected ways. Having spent two decades in Italy, Turkish-born filmmaker Ferzan Ozpetek brings a sense of realism in observing the cultural differences between Francesco and his adopted family. ~ Sandra Brennan, Rovi

CULTURE CRITIC
5つ星のうち1.0 AN ATROCITY
2018年3月20日 - (Amazon.com)
Amazonで購入
AVOID THIS EDITION AT ALL COST. IT IS EITHER A PIRATED COPY (A COPY OF A COPY) OR THE ORIGINAL TRANSFER IS ATROCIOUS TO BEGIN WITH. Furthermore, This edition does NOT have English subtitles. It is all in Italian and Turkish. Even I, am a little conversant in Italian, could not follow it at all. NONE of the Third Party Sellers will tell you any of this. But you have been warned by a disappointed buyer, OK?
続きを読む
4人のお客様がこれが役に立ったと考えています
レビュー を日本語に翻訳する

Bob Drake
5つ星のうち5.0 A Visual Love Letter to Istanbul (2012 DVD re-issue)
2012年4月20日 - (Amazon.com)
Amazonで購入
This DVD is a reissue of the film known in the U.S. as Steam: The Turkish Bath but elsewhere as Hamam. The original DVD image was very dark in places, making it difficult to see details. This version is referred to as an HD transfer, and is much brighter, but there is no Blu-ray disc of this release.

Francesco (Alessandro Gassman) and wife Marta (Francesca d'Aloja) are running an interior design firm in Rome when his estranged Aunt Anita dies in Istanbul. Francesco, an abrupt, no nonsense man, travels there with the intent to settle her estate quickly. He is welcomed into the home of his low-keyed, hospitable, gracious relatives who cared for his aunt. Finding some old correspondence from his aunt to his mother, which had never been sent, he learns of his aunt's passion for Istanbul. Day by day, Francesco slows his pace and enjoys the warmth found in the old section of Istanbul which, it turns out, is ripe for redevelopment. By chance he encounters a hamam, an old Turkish bath, and then is more surprised to learn that the house he is living in sits above a hamam that his Aunt Anita had operated but which had closed. Although an agent pressures him to sell his aunt's property, and warns him that the buyer is ruthless, Francesco surprises all by announcing his intent to refurbish and reopen the hamam. All this time he has been stalling his sister back in Rome as he extend his trip from days to weeks to months.

Eventually Marta, who has been having an affair with a colleague, and is planning to ask Francesco for a divorce, flies to Istanbul to confront him, and does, but she soon discovers the joys of Istanbul herself, reading the aunt's letters, and even claiming the aunt's cigarette holder. When she awakes to find her husband gone from their bed, she instinctively enters a hidden passage to the upper level of the almost restored hamam where she sees Francesco and the young man of the house, Mehmet (Mehmet Günsün), in an embrace. (Viewers are not surprised by this because Francesco's glances towards Mehmet have progressed to looks of longing.) Things then take a nasty, unexpected turn. But the viewer will leave the film with the urge to book the next flight to Istanbul, to search for an old hamam.

Rodney M. Brown
5つ星のうち5.0 "Turkish Bath" Review
2018年12月9日 - (Amazon.com)
Amazonで購入
Great story, but slightly predictable. You could tell who the protagonists where, what their fate would be from the beginning of the movie. But I loved the sights and sounds of Turkey. Made me want to go there and experience a hamam……..Turkish Bath for myself.
続きを読む
レビュー を日本語に翻訳する

Michael T.
5つ星のうち3.0 an interesting look at the culture of the Turkish bath and family conflict
2018年6月17日 - (Amazon.com)
Amazonで購入
It's hard for me to believe a straight guy is going to turn gay just because he is exposed to it. Wanting to live with that family and culture , that I believe. This is more about a husband and wife conflict than any thing gay.
続きを読む
1人のお客様がこれが役に立ったと考えています
レビュー を日本語に翻訳する

Jude Barnes
5つ星のうち5.0 Great film!!
2013年4月28日 - (Amazon.com)
Amazonで購入
This is one of my favorites, along with "His Secret Life" & "Saturn In Opposition", "Family Flaw" & "The Man in His Life" (BTW, a GREAT French film!!!). God, European men are gorgeous & they can act, too!!! Why aren't American men as natural & connected to their emotional life?? Oh, that's right, because that's what makes us American men!! We have no emotional life with which to connect!!