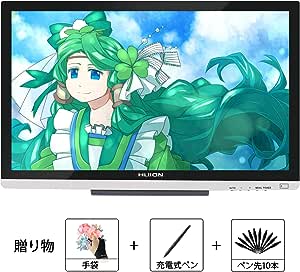 Ron Wylie
5つ星のうち5.0 Brilliant tabblet, fantastic service and I am a grumpy old pro
2016年3月10日に英国でレビュー済み
Amazonで購入
Dont listen the the Wacom lovers out there who write bad reviews about this tablet because they somehow believe they are "elite"
This is a very high quality tablet, as good as any I have owned and the quality of the display is wonderful.

It is very accurate and works in every paint package I have tried, and it is quite superb in "Painter" where the levels of presure really show

I had problems when I first tried ths Huion GT-220, first the pen would not work at all!, then it was sticking on the start of drawn lines, I thought I had made a big mistake but the support from Huion is quite simply the best I have ever encountered, they cannot do enough to help.

I downloaded the latest driver from the Huion site and everything worked beautifuly without anything else having to be done.

I have been a pro artist for over 45 years and I have never used a better product. Amazon was also amazing, I ordered my Huion at about 5 pm on friday and it was in my hands the next day at 3PM, now thats service. I have written to Huion and told them anyone who wants to contact me directly is fine with me, at half the price of the WACOM it is unbeatable
続きを読む
15人のお客様がこれが役に立ったと考えています
違反を報告
レビュー を日本語に翻訳する

Les
5つ星のうち4.0 Huion GT220 Pen Monitor
2015年1月17日に英国でレビュー済み
Amazonで購入
Overall this is extremely good value for the price. It may not be up to Wacom standards but isn't that far adrift in my opinion. The build is quite sturdy, no dead pixels, with clean bright display which needs some calibration out of the box (a little blue and contrasty).

Pressure sensitivity is good, viewing angle good, pen charge lasts for a long time (used for over a month and still not needed charging).

Driver installation is easy - download the latest from Huion, install before connecting the GT220, reboot, connect up and away you go.

The stand is quite sturdy and easy to adjust, however if you like to work on a more horizontal surface there are issues (see below).

It came with a screen protector.

Pen needs calibrating through the driver panel both for pressure and screen/pen position - however there is still some cursor offset and stylus tip discrepancy - I used Lazy Nezumi to further correct this.

Over time the bottom of the screen gets quite warm - 'though not uncomfortably so.
No tilt and turn support.
No dual monitor support.
The position of the leads and connections are poor leading to the monitor rocking at shallow angles.
Cursor offset and stylus tip discrepancy.

Even so, in use it performed very well. All the software that I use regularly - Corel Painter 2015, Photoshop, Artrage and Krita work well, also P.D. Howler and Sketchbook Pro which I use infrequently.

Overall, I am very impressed with the Huion GT220 Pen Monitor. It fulfills most of my expectations and I consider it a bargain for the price.
Because of the price I would score it 4.5 out of 5.
続きを読む
17人のお客様がこれが役に立ったと考えています
違反を報告
レビュー を日本語に翻訳する

Gary McIntyre
5つ星のうち5.0 A fantastic buy!
2016年5月10日に英国でレビュー済み
Amazonで購入
If your thinking about it, just do it as you won't be disappointed. The tablet is just brilliant and will speed up your workflow so much.
Using a mac I found the install problem free. I know you'll see on the Internet some people have had a few problems with set up and even if you do tney have all said that customer support has been brilliant.
The monitor calibration took about 15 minutes which was my choice to do as I need a match for the work I do, graphic novels and photography and its well worth taking the time to do as well.
Ive added the first image I drew on the tablet, by one of my favourite artists, to see how responsive the lines and colouring were and I had no problems at all. Responsive and a pleasure to use. You won't be disappointed so don't hesitate :)
続きを読む

5つ星のうち5.0 A fantastic buy!
2016年5月10日に英国でレビュー済み
If your thinking about it, just do it as you won't be disappointed. The tablet is just brilliant and will speed up your workflow so much.
Using a mac I found the install problem free. I know you'll see on the Internet some people have had a few problems with set up and even if you do tney have all said that customer support has been brilliant.
The monitor calibration took about 15 minutes which was my choice to do as I need a match for the work I do, graphic novels and photography and its well worth taking the time to do as well.
Ive added the first image I drew on the tablet, by one of my favourite artists, to see how responsive the lines and colouring were and I had no problems at all. Responsive and a pleasure to use. You won't be disappointed so don't hesitate :)

MarceBox
5つ星のうち5.0 Fantastic
2016年11月16日にカナダでレビュー済み
Amazonで購入
Being my first ever sceen-on graphics tablet, I didn't know what to expect. I read review after review and watched a ton of comparison videos pitting it up against the Wacom Cintiq.

Based on what I read in the comparisons, I was a bit leery about purchasing as people tended to classify it as "good enough for the price". Not having any sort of experience to compare it to, I opted to buy based on the fact that it was a fraction of the price of the cintiq.

My findings:
Packaging:
it came packed in tons of foam to ensure the product didn't break, box was in good condition, no problems at all.

Build:
it's pretty solid, its heavy and doesn't feel flimsy at all. The unit itself is quite heavy with plastic casing and a metal stand that you attach yourself with enclosed screws(they even included a screwdriver just in case).

Screen:
screen is crystal clear, which i'd expect nothing less from an IPS display. I've been using it in a dual monitor setup and actually prefer it over my actual monitor.

Usability:
works great, other than every now and then after using it for a while the curser seems to become unaligned with the stylus slightly, but not a deal breaker for me

Software:
Software was a bit confusing at first. It came with a driver disc and instructions, the disc had a few different versions of the installation software but no instructions on which one to install so I just installed all of them, haven't had any problems so fart

Extras:
Came with a half glove for you to wear to avoid smudging the screen, absolutely love it!
It also came with a screen protector attached that gives the screen more of a paper-like feel while drawing on it. Problem is, it's aweful. It degrades the screen quality massively, I used for 2 minutes before taking it off.

Summary:
solid device that works great, worth every penny with the exception of the screen protector
続きを読む
25人のお客様がこれが役に立ったと考えています
違反を報告
レビュー を日本語に翻訳する

Gabriel Hernandez
5つ星のうち4.0 Great product with one big design problems
2015年2月14日に英国でレビュー済み
Amazonで購入
3 years update:
After 3 years of owning this tablet I have decided to downgrade my review to 4 stars. The back panel where all connectors are is really badly designed. It has crashed all the cables and connectors and I had to find a rudimentary solution in order to keep my tablet working. I placed a stack of books underneath the tablet, mostly on both sides and I left the central area of the tablet suspended. If I move the cables too much, it gets disconnected from the computer. I noticed the new models have change the panel distribution to one of the sides. There are still no enough features for me to justify the upgrade to a new tablet, but the drawing experience has not changed during this time. Hope this is helpful out there...

Excellent product and super fast delivery. I have been using it for a few weeks now and I feel more used to it. This was an "upgrade" from my Yiynova MSP19U: In fact I loved my Yiynova but I needed a tablet with a higher screen resolution and with no VGA. The screen is light and bright. The colours are now accurate after playing a few hours with the settings. The strokes are smooth, perhaps too smooth to me since I was used to the Yiynova. My only reserve is about the surface, the glass seems to be too glossy and the sounds produced by my hand while I drew on it were annoying. The tablet came with an extra pen, a good quality glove and a screen protector that, due to my terrible skills for this kind of protectors, ended up full of "bubbles" but that is entirely my fault (I'll get another protector...eventually). Before buying it I compared it with the Yiynova 22hd but Huion offers much more for lees money and they also answered all my questions (unfortunately Yiynova never replied) . I was not sure about purchasing this tablet but I do not regret now. If you are looking for a high quality tablet that works great on mac systems this is the one.
続きを読む
2人のお客様がこれが役に立ったと考えています
違反を報告
レビュー を日本語に翻訳する
すべてのレビューを参照します
Amazonプライム会員ならお急ぎ便、日時指定便が使い放題
さらに、映画もTV番組も見放題。200万曲が聴き放題 。クラウドに好きなだけ写真も保存可能。
> プライムを無料で試す