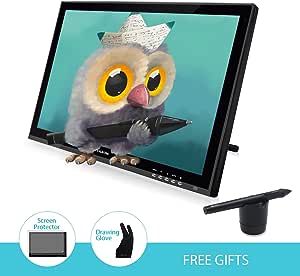 lubuuk
5つ星のうち5.0 Huion GT-190 is just great at a reasonable price
2018年1月1日に英国でレビュー済み
Amazonで購入
This is a very good product. I'm just a hobby artist and that monitor/ drawing tablet is just great. It comes with a driver but you need to have some drawing software. I use Draw plus 9 from Serif. Your capabilities depend more on the software than from this drawing monitor, which has a very good resolution. The only negative thing for me is the stand. I replaced it for less than 21 GBP by: Fixed mount for touchscreens, POS, and PC monitors also bought at Amazon. This is a better stand as I'm using the Huion 95% of the time as a second monitor. Altogether I'm a very happy customer with this device
続きを読む
違反を報告
レビュー を日本語に翻訳する

Amazon Customer
5つ星のうち1.0 Don't waste your money
2017年10月30日に英国でレビュー済み
Amazonで購入
I bought this tablet back in December 2016, and in less than 10 months it broke.
A month after buying it the monitor started to heat up an hour after turning it on, and in less than 3 hours I'd have to stop drawing because my hand would hurt from the heat.
After that the monitor started to act up, static lines appeared on it like they used to on old TV's.
From there on things didn't get better, by April 2017 the pen would act up, the battery would drain out in 2 days and the charging cable tore off inside. I bought 3 other pens from Huion that were "compatible" with my tablet, and none of them worked. The tips become loose and fall out after a week of usage, and by now I ran out of the compatible ones. The second pen it came with was supposed to be a battery pen, but instead it was a chargeable one as well, which, in turn, didn't work AT ALL.

I wouldn't recommend it, I had a friend who bought one as well, and hers already started acting up with the heat as well in less than a month.
I contacted customer support, it took them days to reply, and the only thing they were going to do was "test it" once I paid to have it sent to them and then back, depending on the results from their "tests". I refused the offer since I'm a student and it's vital for me to have a tablet all the time.
So if you want a monitor tablet, don't waste your money and time, go for a better brand.
続きを読む
1人のお客様がこれが役に立ったと考えています
違反を報告
レビュー を日本語に翻訳する

Amazon Customer
5つ星のうち4.0 Pleasantly surprised in every way.
2017年4月25日に英国でレビュー済み
Amazonで購入
I had originally bought a Ugee monitor tablet over this one as I thought it would be a better quality as the Huion was £30 cheaper. After one afternoon I sent the Ugee back and bought this. This is such a better monitor tablet and actually works! On first impressions everything is branded and looks like a solid piece of kit. Huion are very generous and give you 2 pens both with USB chargers (charge lasts for ages), a glove to protect your screen from mucky handprints and a VGA cable plus the other vitals like power leads etc. There is no HDMI port which I know some people would scoff at but to me it doesn't alter performance as the resolution is fine. The screen is glass and I know some people prefer the matte finish of a Cintiq but I didn't find it a problem as I have never used a Cintiq (too expensive!) After installing the drivers, which is probably best straight from their website as they will be the most up to date, you will need to do a callibration for your pen and screen just to make sure you get the best accuracy. I do this every time I turn it on and it takes about 20 secs to do. The pen is very responsive and the pressure is fine working with Photoshop and Manga Studios. Overall I am very happy with this purchase and wished I'd picked this over the Ugee in the first place. It is a well put together piece and works fine. If like me you are umming and arring of which one to go for then I would recommend this screen. It's a great price and if your just starting out doing illustration and design work, you will be amazed at its performance and wonder why you didn't have one sooner.
続きを読む
1人のお客様がこれが役に立ったと考えています
違反を報告
レビュー を日本語に翻訳する

Aimeeboox
5つ星のうち5.0 Fantastic tablet just a few niggles
2017年8月24日に英国でレビュー済み
Amazonで購入
Fantastic tablet the only problem husband is having is everytime you need to recalibrate the pen. It also didn't connect to the PC as cables for the monitor weren't correct however on the Mac first time. This was a quick fix however as he luckily had the cables from an old tablet. Just worth checking if it says no signal or check cable connection it is a simple fix.
続きを読む
違反を報告
レビュー を日本語に翻訳する

Helena Joensen
5つ星のうち5.0 Best option for this price range
2017年4月20日に英国でレビュー済み
Amazonで購入
Man, I've just had this thing for a few hours. Came two whole days earlier than expected! I am so in love with the tablet. Just the right size for an hoppyist artist with limited desk space. Easy to set up and I see what people think of the colors not being the best unless you are right in front of it. (not a problem since my normal computer screen is beside me) package was very carefully made sure it wouldn't break. I can only recommend this to friends and family.
続きを読む
違反を報告
レビュー を日本語に翻訳する
すべてのレビューを参照します
Amazonプライム会員ならお急ぎ便、日時指定便が使い放題
さらに、映画もTV番組も見放題。200万曲が聴き放題 。クラウドに好きなだけ写真も保存可能。
> プライムを無料で試す