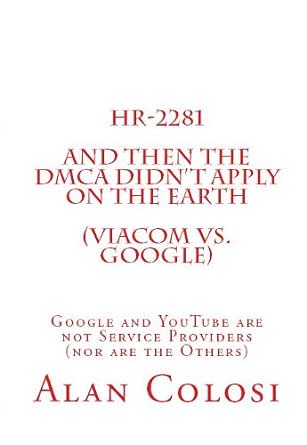 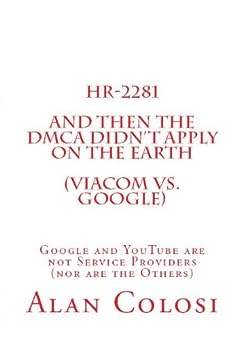 HR-2281: And Then the DMCA Didn't Apply on the Earth (Viacom vs. Google).: Google and YouTube are not Service Providers (nor are the Others) (Book 2 of 3) (English Edition) Kindle版

ALAN COLOSI is a Cum Laude Bachelor of Arts degree graduate in Computer Science with Japanese as the foreign language from BOSTON UNIVERSITY, The College of Arts and Sciences (CAS '00). Having traveled to Japan 91 times from Boston, MA, USA with over 3 Million miles as an Emerald Member with The One World Alliance, Mr. Colosi maintains countless years of computer programming, radio, media, market research and journalism experience integrating both English and Japanese. Prior to BOSTON UNIVERSITY, Mr. Colosi worked at radio stations WXKS-FM, Boston, MA as a core programmer (1984 - 1988) and KISS-FM LONDON (as a reporter 1991-1993) and currently is the owner and operator of SHADO CONTROL management ... http: //www.shado-x.com ... maintaining the site for over 15 years with business news and information, merchandise sales, and advertising in fields emphasizing science, the arts, and business analysis by constructing mathematical theory with successive growth. Mr. Colosi has studied intellectual property law. --このテキストは、paperback版に関連付けられています。