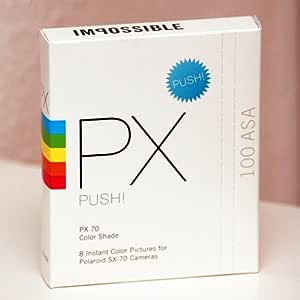 Michael D. Dadiego
5つ星のうち4.0 Instant Film...What's That? It's back!!
2012年2月10日にアメリカ合衆国でレビュー済み
Amazonで購入
I want to state, that due to the lack of a competing product and the original film has been discontinued (due to the company being discontinued)...my review will be based on this product NOT compared to its predecessor. First Kudos for the Impossible project, the team of former Polaroid employees that formed a group to keep the instant film product and user groups alive for all of us to enjoy. These guys are great! Feel free to check out their other products and sign up for their news letter to keep abreact of additions and advancements.
Visit:[...]

OK, back to my film review. Oh, before I begin, this review is based this film and by using my pristine SX-70, version 1...my Polaroid camera of choice:)

First, let me say that the biggest Pro is...it works! For those that have tried many old mid 70's to 80's dated film...the batteries are either dead in the pack (non replaceable or rechargeable (I tried)...or the fill is derogated. The Impossible Project film works....now works does not mean as you may remember (I said I would not compare - but please do not expect apples to apples). The film is real sensitive in such that you must handle AS DIRECTED by the impossible Project and NOT the original Polaroid instructions. The biggest CON...You will notice that you need to `coddle' the film to get a decent image...ignore instructions, and you will get !@#. The product (film) comes in color, B&W, and one or two other various blends. I additionally recommend you check out their site for on-line pre-use instructions/tips and a gallery of examples. Accompanied with the Amazon user reviews and their site's intel, you will surely `get the picture' (no pun intended). In all, I am happy.

If I had a wish for the Impossible project...it would be to add to another service I would definitely pay), it would be the restoration of past original Polaroid film packs (either by them or film submitted by the customer) - basically a battery over haul. It is finite service, for the film out will eventually run dry...but there is PLENTY. So unless it is `Impossible' (no pun intended again), it would be cool, nostalgic and another product/service I would support.
続きを読む
役に立った
フィードバックを送信中...
フィードバックをお寄せいただきありがとうございます。
申し訳ありませんが、お客様の投票の記録に失敗しました。もう一度試してください。
違反を報告
レビュー を日本語に翻訳する

Ryan
5つ星のうち5.0 I love what they are doing, but...
2012年1月10日にアメリカ合衆国でレビュー済み
Amazonで購入
I am giving this film a five star review. This does not mean that everyone will be able to use it like the old polaroid film. This is very expensive (around 3 dollars each exposure) to use. The results are not clear and come out a shade of pink. This being said, the quality of the product far surpasses what I expected it to be. While shooting, make sure to cover up the film with your hand immediately after shooting the exposure. I pull the film out and stick it upside down against my body for a good five minutes. With the shots that I've taken so far, it seems that it does take longer than five minutes to fully develop. I just laid them upside down on a flat surface to let them continue to develop. So far I am having a blast using this, and I would recommend it to anyone.
続きを読む