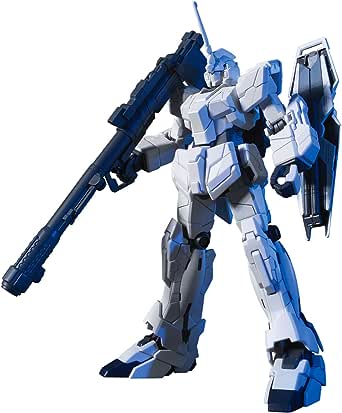 Hailey Wallin
5つ星のうち5.0 Great condition, and easily put together
2019年5月9日にカナダでレビュー済み
スタイル: 単品Amazonで購入
For a cheaper model kit I was extremely surprised in how well the kit put together. Definitely a good choice, especially for beginners

EDIT: It was a lot cheaper when I bought it, for the price it is now I’d give it more of a 3-4 ish stars
続きを読む
役に立った
フィードバックを送信中...
フィードバックをお寄せいただきありがとうございます。
申し訳ありませんが、お客様の投票の記録に失敗しました。もう一度試してください。
違反を報告
レビュー を日本語に翻訳する

Hasasuki
5つ星のうち4.0 Unicorn Gundam HG 1/144
2016年9月4日にアメリカ合衆国でレビュー済み
スタイル: 単品Amazonで購入
I went ahead and bought this version to get the beam sabers for the Unicorn Gundam [Destroy Mode - Red Frame]. It's an easier build than Destroy mode. Nubs marks are a problem on the feet, and can be on the other navy blue pieces. You will get them bad on the grey pieces too, but these are really no big deal because most of these parts will be covered since this model cannot transform into Destroy mode. The worst nub marks are on the front of the feet. The rest will be hidden by the armor on the feet. Otherwise, the white parts do a good job at hiding nubs marks when you clip them with a clipper. There are only 2 stickers! One green sticker for the eyes, that are covered, and one green sticker for the scope of the bazooka. You do not get the beam rifle, you only get the bazooka, a closed shield, and 2 pink beam sabers. You get 4 beam saber handles though. The beam saber arm slots cannot rotate all the way out, as they can in destroy mode. What's neat is that on this model, that piece is not as loose as it is on Destroy mode. Makes it neat to pull out, take the beam saber, put on the pink beam, and put it in his hand. The bazooka is grey, so you could paint it black? Also the closed shield has one white piece that represents the closed parts of the shield. When you look at the box, you'll see how these parts and the bazooka are painted. It's really up to you, but you really don't have to paint anything on this kit, and it still looks good! Now it is mostly white, so unlike other model kits, from a distance it's just a white blob. To make it stand out more, I highly recommend panel lining to bring out more of the details. I will be doing this to mine soon as well. The pose-ability is fair. Because of the bulky armor, your range is limited in the arm movements. Leg movements are limited by the polycap thing in between the legs and the side skirts. You can clip the front waist skirt in two so that one skirt armor goes up with the leg when you do a 90 degree rotation. You get an extra ammo pack for the bazooka that plugs into the the back skirt armor. There is a little peg to attach the bazooka to the backpack. As you assemble the bazooka, you have to make sure you put the handle in facing up a certain way so that you can use the edge of this handle to pull it out later, when you want the Gundam to carry this on his backpack. For this to happen, you will have to remove the ammo pack, and they give you an extra seal to close it off. For the average person, they may find it annoying that Bandai has so many different kits for Unicorn and Banshee Gundams. I can agree, but I am a collector so I don't mind. If you're not into the 1/144 scale lineup, then I highly recommend the 1/100 Master Grade Unicorn Gundam. I was told to go for the newer version, and to avoid the OVA version.
続きを読む
1人のお客様がこれが役に立ったと考えています
役に立った
フィードバックを送信中...
フィードバックをお寄せいただきありがとうございます。
申し訳ありませんが、お客様の投票の記録に失敗しました。もう一度試してください。
違反を報告
レビュー を日本語に翻訳する

Timing on the package was spot on, it arrived when it said it would. My problem with the shipping is that the box came dented up on the corners. I feared the worst when opening up the kit but was relieved to see that the only damage to the kit itself was some slight deformation of the beam saber blades (was able to bend them back into shape without putting too much stress on them) and one of the pegs in one of the ankles was broken off (fixed with modeling glue and it worked like a charm). Things could have been worse, but this was the worst shipping job I'd seen.

Usually when I get my Mobile Suit kits they arrive boxed nicely either through Amazon or the USPS will box it up, not this time... The kit came in it's box and instead of being bubble wrapped and then boxed again it was bubble wrapped and then thrown in one of those flimsy USPS airtight bags. Needless to say it provided little to no protection.

Waiting for option to purchase Weapon Set of the Fulll Armor without having to purchase another gundam-figure.