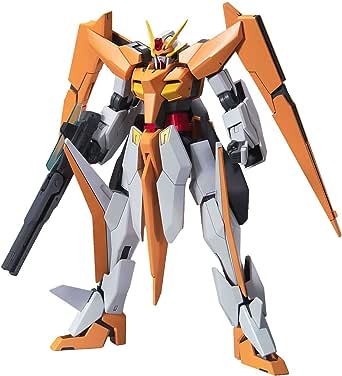 BNuts
5つ星のうち3.0 The Superior Arios
2015年10月15日にカナダでレビュー済み
Amazonで購入
This kit is solid enough, although the feet being hollow (for the transformation) may contribute to difficulties posing it. Be prepared to wrangle with it a bit.

Colour separation is good, and there is a fair amount of painting / stickering to be done. A number of video reviewers complain that the stickers for the knee wings peel off from rubbing against the knee for the transformation. I used my metallic red paint marker instead, and the near-orange is a decent match. Bandai gives you plain black stickers to be used under the elbow condenser and on the GN drive. I used my silver paint marker instead, and coloured the underside of the clear domes with my green sharpie instead, and the effect is fair. You could probably skip the crotch drive, which stays hidden most of the time. I used my silver paint marker because I don't have a grey one and my black marker rubs too easily. There are lots of places that could be coloured for accents, but aren't so it's smart to be aware of this as you go. These include on the legs, the machine gun covers, and the vents on the nosecone / field emitters.

For those wondering about any build differences with the heavy weapons Arios (kit 50), of course there's the special cockpit for the missile pods and the hyper bazooka, but on top of that, the legs connect vertically for kit 50, where they connect horizontally on the standard kit. Naturally, this means the legs are more likely to fall off there. But this is still a fair purchase if you cannot find kit 28 for a reasonable price. The special cockpit is, of course, compatible with kit 28. If you're using the missile pods from kit 50 in jet mode, to remove them from the arms just slide them off forward or backwards. This is far easier than trying to pry them off the arms by force.

The transformation is also fairly easy, although more complex than with the Fenice Rinascita. Here (not counting accessories) you only need to remove and flip the backskirt, and that's to help lock things in. The cockpit could also be used to lock things into place but it does not. I'm also having trouble figuring out the large adapter. I used to see the jet form as overly long, but now I see it as sleek, and although the Harute carries elements of the GN Archer I like, reviewers show it does not lock into place properly. The Arios has one of my favourite transformations.

The stand is useful to have, however the straight stand snapped when I tried to switch them around. Obviously it's not that strong, so be careful. I am trying to glue it back together.

You should be prepared for the frontskirts, which are mounted on very small balljoints, to pop off. The beam saber hilts attach crooked to the underside, but seem very secure.

As for articulation, it's pretty good. The joints in the wrists mean you can point the weapons anywhere you want. Just be careful about parts rubbing against each other if you want the model to last.

The wrist-mounted machine guns come as molded parts that you slot into a mounting on the wrist, and the cover is easily moved to expose or cover them. The missiles in the pods on kit 50 are likewise molded in yellow plastic, so there's no need to try and colour them. Caution is advised with small parts.

The V-fin assembly is interesting, since the fins themselves are one part and snap on securely ahead of a cone to secure everything. Bandai gives you a small red sticker to go under the hollow forehead jewel, which is itself clear. I painted that part of the cone piece, then coloured the underside of the jewel with my red sharpie. Once mounted, I coloured the sides of the jewel with my metallic red paint marker.

If you are looking for the better Arios, you have found it. Kit 28 is less likely to lose its legs than kit 50. That said, Bandai has not figured out how to keep long frontskirts mounted very well, and some stability must be compromised for the transformation.

This kit took me about 5 hours (including painting) to complete, because there's so much in the arms and legs.
My tools include a baby nipper, file, and angled tweezers.
Build difficulty is intermediate, as some of the instructions require you to think as you interpret them.
This should probably not be your first kit, but then there are so many other possibilities, and absolutely no reason why you should not get this as a second or later kit.

I highly recommend the HG Arios (kit 28) for intermediate and above builders. With some extra patience, beginners can do it too.

* Note: The missile pods, attaching cockpit, and its sticker are included only with HG Arios GN-007GNHW/M, kit 50. They are NOT included in this kit (28). I got kit 50 to share it, and its extra weapons, with one of my nephews.

UPDATE: One of the pegs for the legs snapped off during transformation, so I had to repair it. Plastic cement does not work, and hot glue isn't strong enough. With some help I used a nail to support the repair job, but I'm uncertain as to how well it worked. This costs this kit a star.
続きを読む

Ed Guy
5つ星のうち5.0 Great kit to build awesome color separation though I wish ...
2016年12月9日にアメリカ合衆国でレビュー済み
Amazonで購入
Great kit to build awesome color separation though I wish the orange on the wings wasn't a sticker it wouldn't have been too hard to make those wings 2 pieces. This unit transforms with only having to remove one piece rotating it and putting it back on, which could have just been a rotatable piece but thats ok. This comes with a stand which is an added bonus though I cant seem to figure out how to get the airplane mode to stay on the stand. There is a lots of good detail on this kit little panel lining here and there can be done to add some details but its a great straight build. The airplane mode is kinda "loose" in that the legs really dont lock to anything they just need to be positioned in a certain way and they move easy so you probably wont play with it too much in that mode.

Should you buy this, no lol get the same kit labled as #50 GNHW/R which is the same exact core mold and it looks like there is a little more color separation on the shoulders and you get an upgraded gun and 2 pods. Also the GN Archer goes with this kit as the 2 suits in airplane mode can be docked together.
続きを読む
役に立った
フィードバックを送信中...
フィードバックをお寄せいただきありがとうございます。
申し訳ありませんが、お客様の投票の記録に失敗しました。もう一度試してください。
違反を報告
レビュー を日本語に翻訳する

Adam Jester
5つ星のうち3.0 A bit fragile, but not too bad
2019年5月13日にアメリカ合衆国でレビュー済み
Amazonで購入
This is the second time i got this kit. The first time i bought it one of the ball joints broke i can tell this kit still has the same issue if you aren't careful. It seems a bit sturdier than the first one, but better safe than sorry
続きを読む
役に立った
フィードバックを送信中...
フィードバックをお寄せいただきありがとうございます。
申し訳ありませんが、お客様の投票の記録に失敗しました。もう一度試してください。
違反を報告
レビュー を日本語に翻訳する

Jorge Jimenez
5つ星のうち5.0 1/144 #28 Arios Gundam BAN 156878
2009年10月18日にアメリカ合衆国でレビュー済み
Amazonで購入
Really cool gundam. it can transform to flight mode. it comes with a gn sub machine gun. and comes with 2 blade handles "with" two blades. but ones shorter than the other.i also recommend coloring the clear parts instead of using the stickers if you would want to detail it more. even without that is still looked pretty good.
続きを読む
2人のお客様がこれが役に立ったと考えています
役に立った
フィードバックを送信中...
フィードバックをお寄せいただきありがとうございます。
申し訳ありませんが、お客様の投票の記録に失敗しました。もう一度試してください。
違反を報告
レビュー を日本語に翻訳する

Felix Roberto Read
5つ星のうち4.0 Cool Looking Harder to Pose Than Other HG
2014年6月15日にアメリカ合衆国でレビュー済み
Amazonで購入
Not Bad Cool Looking but hard to pose, if you got some clear cement put a little on the hip connector, legs teng to come loose, and front skirts too
続きを読む