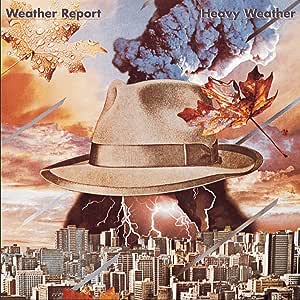 Ian Thumwood
5つ星のうち4.0 Weather Report's popular tip towards big band jazz
2018年3月30日に英国でレビュー済み
形式: CDAmazonで購入
I have always been a bit sceptical about Weather Report because, getting in to jazz in the 1980s, they seemed exactly the kind of band that the musicians I was listening to then were reacting against. The whole idea of Jazz Fusion was an anathema and it is still an area of jazz where I tread really carefully. There are bands like Herbie Hancock's Head-hunters where the concept and sophistication of the music pulls you in. With Weather Report, there was always the suspicion that Wayne Shorter was under-used and that Joe Zawunal's banks of keyboard smacked of Prog-rock overindulgence.

My experience of the band was really dominated by the more celebrated tracks on this record and the live album "8.30" which I always liked. However, the element of 1970's excess seemed to marr these records. "Heavy Weather" includes the stasnd out tracks "Birdland" and "A remark you made" but, in both instances, the live versions on "8.30" are more exciting. "Teen Town" seems far more intriguing but it is the unfamiliar stuff such as "Havona", "Palladium" and "The juggler" which provide a degree of interest. Shorter pops in and out, occasionally offering something of interest yet it palls in comparison with his work with the acoustic quartet he has been working with throughout the 2000's. The stars of the record are no doubt the two percussionists and they give the music a bite and degree of snap which makes the arrangements more interesting. All in all, this is not as commercial a record as I had anticipated and Zawunal was still very much switched on to jazz harmonies so that the credibility remained.

I don't think this is quite as good as "Black Market" which maybe offers a stronger jazz element. Neither records seem particularly rocky and if there is an influence from other genres, it is clear that Joe Zawunal had his ear firmly cocked towards big band jazz and Duke Ellington in particular. The multitude of colours conjured up by the keyboards attest to this and if they are not necessarily as dated as I might have expected, it is clear that the writing was hinting at larger ensembles. In some ways, this is a defining jazz record of the 1970s, a commercial success with appeal outside of jazz yet the underuse of Wayne Shorter remains a disappointment , esepcially if you are familiar with his work with Miles Davis and current quartet. Records like "Heavy Weather" show just how much of this band's music was actually arranged. It is an enjoyable record whilst at the same time indicative of an era when jazz semed to be defined by nostalgia or had retreated to the loft scene where it retained it;s credibility.

spigomars
5つ星のうち4.0 A burning Panama hat ( not for long me thinks ). A more powerful event is on the disc which is contained inside the CD jacket
2016年3月31日にカナダでレビュー済み
形式: CDAmazonで購入
When it comes to Weather Report there is precious little that there is to criticize, that is if you are into Jazz. With the names in this group it is easy to see just how they manage to put out so many GREAT DISCS....JACO PASTORIUS (BASS ) WAYNE SHORTER (SAX)...ALEX ACUNA (DRUMS)...JOE ZAWINUL (KEYBOARDS )...MANOLO BADRENA ( PERCUSSION )...If you like acid jazz, or fusion, then this and the people mentioned above are just the kind of people who would be the very kind of instrumentalists that would appeal to you. Again i have only heard this disc once so i am going on limited input here however from what i have heard this is a good Fusion CD. NO, its not great that i have very rarely heard in jazz so far only very few have rated that kind of 5th star. DR John rated that last star, john McLaughlin invited that last star, as did Jon Anderson however there were very few in that club....Spigomars
続きを読む
役に立った
フィードバックを送信中...
フィードバックをお寄せいただきありがとうございます。
申し訳ありませんが、お客様の投票の記録に失敗しました。もう一度試してください。
違反を報告
レビュー を日本語に翻訳する

Sachin Chavan
5つ星のうち5.0 Definitive album
2017年7月4日にインドでレビュー済み
形式: CDAmazonで購入
Anyone who follows Jazz and Jazz-Rock fusion knows what Weather Report means as a band. And Heavy Weather is their best! Some of these songs have defined an entire genre. At the price, you won't get better value. The recording shows its colour on a good stereo system
続きを読む
役に立った
フィードバックを送信中...
フィードバックをお寄せいただきありがとうございます。
申し訳ありませんが、お客様の投票の記録に失敗しました。もう一度試してください。
違反を報告
レビュー を日本語に翻訳する

Bigswinger
5つ星のうち5.0 Classic album ~ excellent remaster
2019年1月4日にオーストラリアでレビュー済み
形式: CDAmazonで購入
I've got this album in a number of formats and it's always has been a favourite, I recently invested in a new CD player and was looking for a remastered and reasonably priced CD which I'm glad to say I took the advice from Amazon buyers in this forum and I'm very happy with my purchase.
続きを読む
役に立った
フィードバックを送信中...
フィードバックをお寄せいただきありがとうございます。
申し訳ありませんが、お客様の投票の記録に失敗しました。もう一度試してください。
違反を報告
レビュー を日本語に翻訳する