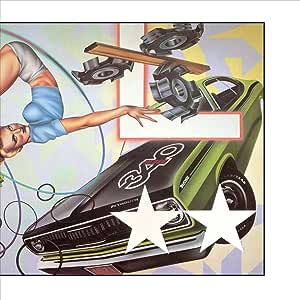 K. Hall
5つ星のうち5.0 The Cars: "Jacki"?
2018年4月2日 - (Amazon.com)
形式: CDAmazonで購入
It's always fun to hear where songs started out before they were cleaned and polished up, or versions that were originally considered for the album. Plus the B sides or unreleased songs. "Drive" was originally intended for a Ric Ocasek solo project and never expected to go any further than the demo when first recorded for Heartbeat City. Also it was recorded twice - with Ben Orr and Ric O. both taking lead vocals with Orr's version being the obvious choice for the album. The updated cover was David Robinson's original submission for the cover in 1984 showing the full artwork by Peter Phillips that was cut in half for the original CD release. so much useless but fun info. :-)
続きを読む
18人のお客様がこれが役に立ったと考えています
レビュー を日本語に翻訳する

Haik Sahakian
5つ星のうち5.0 Review of the extra tracks
2018年6月23日 - (Amazon.com)
形式: CDAmazonで購入
If you're wondering about the extra tracks... the demo of Drive is really interesting, over a latin beat on a drum machine. The Heartbeat City early version is almost the same as the album version. The early versions of Why Can't I Have You and I Refuse help you imagine what the songs on this album would have sounded like if they'd been produced like the previous albums, and not given the computer treatment, which sounded brilliant, but was a different sound. The liner notes have a good interview with Ocasek. I didn't notice a difference in sound quality from earlier versions, though I bet there probably is one.

The album itself is a great radio album from when I was growing up, like Reckless or Learning to Crawl. I was 13 when it came out and at one point or another, each song on this album was my favorite. Heartbeat City and Drive are perhaps the best two songs.

C. Gregory
5つ星のうち5.0 Expanded and sounding great
2019年6月11日 - (Amazon.com)
形式: CDAmazonで購入
The cars was one of those groups that grew on me. I did like some of their songs but I never bought a cd until years later. I was content up to that point to just hear it on radio etc. And, this version is great as it's got bonus songs and is fully remastered so it sounds beautiful. I also purchased Shake it UP which was also remastered/expanded. This album is great if you're just starting out with the Cars or if you are always familiar with their greatest hits but want to hear the deep cuts. I used to buy GH packages of someone that I loved from back in the day then I'd start to like some songs that I never heard before. Eventually I'd buy the albums they were on, because I feel if I liked three songs on the cd then maybe there are more tracks I've never heard that I might like. Normally this is a very hit or miss approach, but since I liked at least three songs, it was a solid investment so I didn't lose anything. And on occasion you do find that extra track and that makes it an even better investment. With this album I like a majority of the songs, even though I only knew three of them going in. So hopefully you will have the same experience with the album that I did. Definitely worth picking up.
続きを読む
3人のお客様がこれが役に立ったと考えています
レビュー を日本語に翻訳する

B. Best
5つ星のうち5.0 "Must have" 5th album from the Boston Badboys with extra tracks!
2018年4月5日 - (Amazon.com)
形式: CDAmazonで購入
While this album had it's moments, and probably their most commercial successes with Drive and You Might Think, it pales in comparison to the first 4 albums that they put out. It's fun to have demos and singles,though.I have included a personally created cover to go with my review. Enjoy!
続きを読む