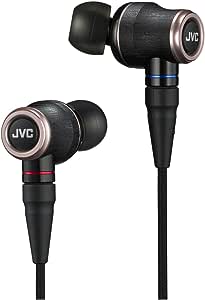 Discerning Attorney
5つ星のうち5.0 THE JVC HA-FX850s HAVE BEEN DETHROANED. THE NEW EARBUD KING IS THE JVC CLASS-S HA-FW01!
2017年2月3日にアメリカ合衆国でレビュー済み
サイズ: なしスタイル: 本体Amazonで購入
MY DISCLAIMER is that sound preference is inherently subjective. Therefore, what may sound excellent to me, may not necessarily be your cup of tea. As far as background, I prefer a V-shape sound with emphasis on bass and treble. I have also owned a vast array of headphones and earbuds ranging from $20 - $1500.00. I consider myself musical and play the piano by ear.

I have now replaced my prior "go to" high-end JVC HA-FX850 earbuds with the JVC HA-FW01 flagship earbuds. Yes, they cost nearly twice as much as the 850's, but if you're like me, and there is enough noticeable improvement in sound quality (and you have the financial ability to upgrade), I do believe it is worth taking the plunge for the JVC HA-FW01 -- again this is a matter of opinion.

JVC HA-FW01 premium flagship earbuds were compared against the very popular and highly-praised JVC HA-FX850. First, the cord in the JVC HA-FW01 is cloth-covered versus rubber in the 850s. I feel that the JVC HA-FW01 are slightly lighter in weight than the 850s, but still have some weight to them. I prefer the appearance of the JVC HA-FW01 since they are black and not a brown wood color (my preference again). You get a nicer leather case with the JVC HA-FW01.

When I first fell in love with the 850's (after returning the Shure 846s), I didn't think there could be much improvement from the sound quality. Remember, I compared the sound quality of the 850s close to the level of my Fostex TH900. However, now that I have compared the sound between the 850s and JVC HA-FW01, there is no contest between the two of which one replicates the phenomenal sound quality of my Fostex TH900s. My new, premium earbud headphones are the JVC HA-FW01. When I thought my search was over with the 850s, I humbly stand corrected. The JVC HA-FW01 are strongly recommended for those who don't want to settle for less than the best audio sound. Is the price worth it? Well, if you have the means, I say absolutely. Are they worth the price difference between the 850s? In my opinion, yes. But again, that's your call! I hope this helps!

FOR THOSE INTERESTED - below is my prior review of the JVC HA-FX850s:

The HA-FX850 has excellent sound with "Wow" factor bass. If you are a basshead, you will thoroughly enjoy these. If you enjoy a V-shaped sound, you will enjoy these. Is the bass predominant? Yes. Is it too much bass? No, not in my opinion. The unsurpassed low ends do not drown out the highs, and the high are not overemphasized. I enjoy deep bass and sparkly, detailed treble. I compare these to the Fostex TH900. They do sound like full-size headphones and have a wide, distinctive soundstage. I have searched years for my go to earbud headphones, even owning Shure's flagship 846s. I prefer the sound of these JVC Ha-Fx850 far more and for about 1/3 of the price. Unlike many earbud headphones, it does not require much juice to drive these. My usual complaint when listening to music on my phone is that the volume doesn't get loud enough. With these, that is no problem whatsoever. I have owned and tries probably over 3 dozen higher-end headphones. These have ended my search.

Strongly recommended. Your search may be over as well.

I would lower these to 4.5 rating due to the cord. While the cloth covered cord and the cord itself delivers high-quality sound (I compared three other aftermarket cables and the original is by far still the best), the cord, over time, gets synched and warped due to the cloth cover. They should have made this cord rubber or plastic coated. It does make the cord look ridiculous over time.
続きを読む
23人のお客様がこれが役に立ったと考えています
違反を報告
レビュー を日本語に翻訳する

VillaC
5つ星のうち5.0 These buds sound sublime
2017年8月28日にアメリカ合衆国でレビュー済み
サイズ: なしスタイル: 本体Amazonで購入
I never leave reviews, but these earbuds are incredible. I don't consider myself an audiophile and have not purchased millions of dollars in audio equipment, but I do have better-than-average audio discriminating capacity and am quite picky about music. These buds are incredible at reproducing the full dynamic range in almost every genre of music--from deep bass-heavy pop/electronic music to delicate, airy orchestral pieces. I was blown away while listening to Vivaldi's winter--you could actually hear the bows ricocheting off the strings of the violins. The best description of these is: SUBLIME. It's pricey, but you will not regret it. It beats out a lot of my over-ear headphones by a long shot.
続きを読む
6人のお客様がこれが役に立ったと考えています
違反を報告
レビュー を日本語に翻訳する

SC
5つ星のうち5.0 Fantastic sound, big improvement from JVC fx850...
2017年5月3日にアメリカ合衆国でレビュー済み
サイズ: なしスタイル: 本体Amazonで購入
Fantastic sound, for a two year fx850 owner, I can easily notice the improvement of JVC ha-fw01. Fw01 got more details, more sound separations, wider soundstage, controlled bass than fx850, that makes me feel like all my music collections are new again. It's interesting fw01 has smooth sounding like Analog sound to me when I was listening some Hi-Res. files. Highly recommended!
続きを読む
8人のお客様がこれが役に立ったと考えています
違反を報告
レビュー を日本語に翻訳する

Fabian
5つ星のうち5.0 I totally recommend. A+++ in my book
2017年10月15日にアメリカ合衆国でレビュー済み
サイズ: なしスタイル: 本体Amazonで購入
Exceptional IEM by jvc. Had the HA850 for 3 years until I ordered these to replace my broken 850s. I must say I am impressed with the sound these little guys put out. I paired them with my new Fiio x7 Mark ii and oh boy. I listen to all genres of music and these manage to make every single one sound incredible. I totally recommend. A+++ in my book.
続きを読む
6人のお客様がこれが役に立ったと考えています
違反を報告
レビュー を日本語に翻訳する
すべてのレビューを参照します
同様の商品をご覧になりませんか？ こちらのリンクで参照ください。バランス接続 イヤホン
Amazonプライム会員ならお急ぎ便、日時指定便が使い放題
さらに、映画もTV番組も見放題。200万曲が聴き放題 。クラウドに好きなだけ写真も保存可能。
> プライムを無料で試す